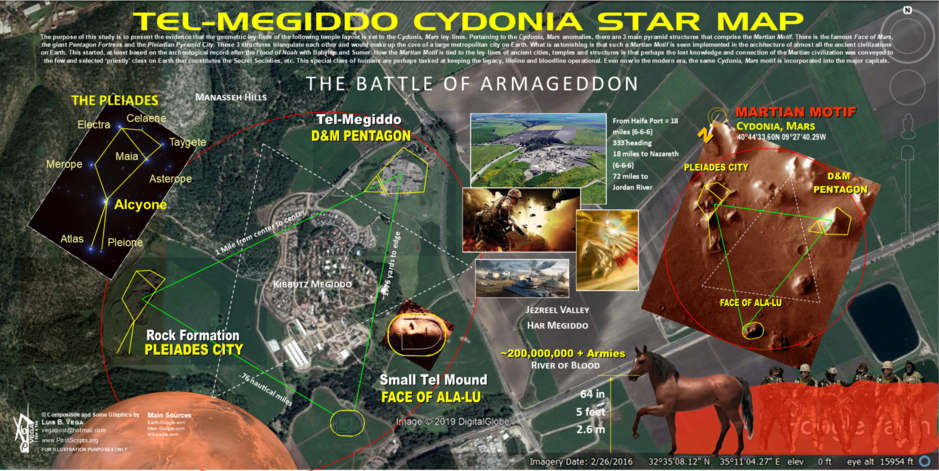 #355:
​TEL-MEGIDDO
BATTLE OF ARMAGEDDON
Staging Point of the Convergence for the Final War

‘And the 6th Angel poured out his vial upon the great River Euphrates; and the water thereof was dried up, that the way of the Kings of the East might be prepared. And I saw 3 unclean spirits like frogs come out of the mouth of the Dragon, and out of the mouth of the Beast, and out of the mouth of the False Prophet. For they are the Spirits of Devils, working miracles, which go forth unto the Kings of the Earth and of the whole world, to gather them to the Battle of that Great Day of God Almighty. Behold, I come as a thief. Blessed is he that watches, and keeps his garments, lest he walk naked, and they see his shame. And he gathered them together into a place called in the Hebrew tongue Armageddon.’ -Revelation 16:12-16

The purpose of this study is to suggest that the Tel-Megiddo of northern Israel is construed to the Cydonia, Mars triangulation of pyramids found there. The area seems to confirm that a network of such Martian Motifs was inter-connected through Sacred Geometry on one hand and serviced as part of a grid of fortifications along the Via Maris or the ‘Way to the Sea’ route. This route was the ancient ‘highway’ that lead from the eastern lands of central Asia to Egypt. More importantly for those that study the End Times, Tel-Megiddo is positioned to be the possible area of the staging ground for the armies of the world lead by the AntiChrist that will invade Israel. This is believed to take place on the last day of the Tribulation Period of the 7th Week of Years or the 7-year Sabbatical Cycle yet to be accomplished per the prophet Daniel.

Based on the traditional New Testament interpretation, it is the final day when Jesus returns with His Bride to personally execute judgment, vengeance and set up His Millennial Kingdom for 1000 years. Given the nature of such a concept, the term ‘Armageddon’ has come to take-on more than just its Biblical inferences. Beyond being the staging place where the armies of the world will converge, the term has become synonymous with the ‘End of the World’ scenario. Although this will not be the case, it will actually be an end to the reign of Lucifer, as the God and Ruler of planet Earth. As he was defeated at the Cross of Calvary by the Last Adam, Jesus, the acquisition of His domain restored to Adam has not been executed until such a time. Why?

Among many reasons, the primary ones have been that during this time interval, the Gentiles from among the Nations are being given an opportunity at redemption through the blood and body of Jesus Christ. Then the last prophetic week of Daniel necessitated the last prophetic week dealings with Israel’s blindness, rebellion and need to have such cases dealt with by Jesus, their Messiah, etc. According to research, Megiddo mean, ‘a place of crowds’. And thus, it fits its name and purpose, prophetically. The place of Tel-Megiddo is much older than the history of Israel as with other Tels in the Holy Land like Tel-Deir, Tel-Dan, and others, they were part of an ancient body of knowledge.

The God of Fortresses
This secret knowledge includes the primarily the Martian Motif that configured their fortifications based on Sacred Geometry and the energy ley-lines of Earth as mentioned. More than that, this study suggests that such a triangulation of the sites replicated from the Cydonia, Mars pyramid complex is essentially the ‘Signature of Satan’ on 1 level. It is as though Lucifer imprinted the high-holy places of fortifications with this ‘stamp’ or template signifying its ownership, purpose and energies. This study, as in others of the same type suggest further that this triangulation serves as a ‘Star Gate’ or portal that facilities the Fallen Angelic Beings and their cadre of demons to traverse dimensions from, either inter-dimensionally and/or terrestrially.

Thus, the Tels were built upon as the successive empires and/or peoples acquired the locations. For example, during the reign of King Ahab, it was he that fortified the location in the Northern Kingdom against the Assyrians, etc. In the Bible, Megiddo is mentioned 12 times but as stated, none had a particular connotation that it was to be the site of a converging mass of armies, both terrestrial and Angelic in nature at the end of the Tribulation Period. It only in the New Testament, the last book of Revelation in chapter 16 that the word Armageddon is written about. Many argue that Armageddon is fictitious and there is actually no direct verse implying an amassing of world armies against Jesus Christ. However, it is inferred based on the language and context that is to be a gathering place for a war that will meet with ‘GOD, Almighty’.

Others argue that there are no ‘Mountains of Megiddo’ and thus such a notion is to be only ‘spiritualized’. Consider that the fort of the Tel-Megiddo is at the edge of the ridge that runs all along the Valley of Jezreel. This ‘mountain’ range is called the Hills of Manasseh. These hills are not ‘mountains’ as they would be in other nations, but neither are the ‘hills’ of Samaria and Judah, yet YHVH in the Bible says that for example the armies of Gog will be decimated in the ‘Mountains of Israel’. In the book of Daniel, the armies are named in terms of their geographic origin, King of the North, South, etc. It is not really clear how the AntiChrist’s role will play out in this scenario. Many suggest that the invasion of Israel by the King of the North is what will bring the Beast and his armies to the defense of Israel as he is seemingly their political and spiritual Messiah.

As to the Cydonia, Mars triangulation of the Tel-Megiddo, the Martian Motif overlay fits the various angles and ley-lines. The proportion of the size of the fortress on the Tel determines the shape, orientation and layout of the other 2 motif. This is the case here at Tel-Megiddo. The main fortress of Tel -Megiddo appears to then correspond to the giant D&M Pentagon of Mars. There is a ridge of either rocks or carved structures to the west that corresponds to the Pleiades shaped Star Cluster. Then to the south is a very peculiar smaller Tel that is in a middle of an agricultural field but is untouched. Amazingly, the orientation is that of how the Face on Mars is situated. Based on purely Google Earth imagery, it would appear that the ‘Face’ has 3 oval liking formations that suggest the 2 eyes and a mouth perhaps. What is at the heart of the triangulation and if one inverts the triangle to form its counterpart as in a hexagram, is the Kibbutz of Megiddo, dead center.

The Return of the King
What is also interesting to observe in terms of the triangulated measurements is that from the Face of Mars, that of Ala-Lu, the Rebel King to the very northern edge of the Fortress of Tel-Megiddo is approximately 1776 yards. This has obvious Masonic and Luciferian connotations of the truncated pyramid that has the date stamp of May 1, 1776, etc. It is just another encrypted nuance of how the Luciferians implement such codes in such places, even topographically if one has eyes to see. From the Tel fortress to the center of the Pleiadian rock formation is 1 mile for a scale to appreciate.

Nonetheless the concept of there being a ‘Final Battle’ between the forces of good vs. the forces of evil is clearly understood to one day happen. Armageddon is thus symbolic, all-encompassing of the confrontation that will come to a head between the 2 Christs, the 2 Anointed ones, Jesus and Lucifer. The outcome? Jesus wins. Jesus has already won, at Calvary as mentioned. It will be an occasion to have YHVH’s enemies obliterated as it is in keeping with how YHVH in the past has destroyed entire armies. One such example was that of the Assyrians and the Egyptians during the Exodus crossing of the Red Sea, etc. Thus, Armageddon may not be necessarily the ‘Final Battle’ but will be the converging staging ground of the armies of the world.

The Valley of Jezreel is suited for such a space that will have its intent on mobilizing towards Jerusalem. This is the objective, capture Mount Zion. Based on some interpretations of how the scenario of what occurs when Jesus literally and physically returns with His Bride are the following. First, Jesus appears as the Sign of the Son of Man piercing space and time and ‘all will see Him’ coming in the clouds. He comes to the Bozrah area, then to Petra to rescue the Remnant of Israel’s faithful who did not accept the AntiChrist as the false Messiah nor take the Mark of the Beast and fled there. Jesus and His armies then round-off to the Valley of Har Megiddo for the great slaughter and carnage to ensue.

This will be the occasion where the ‘River of Blood’ will flow for approximately 200 miles. Based on prior studies on the topic of Armageddon, it is estimated that if one just takes the volume of blood per body of the 200 million man army mentioned, the depiction will be as the River Jordan, from Megiddo then drains-out down at Eilat. Mind you, this ‘execution’ of the obliteration is taking place even as Jesus with His Armies of the Redeemed Saints have not made ‘touchdown’ on Earth yet. Jesus and the Redeemed will only then descend on the Mount of Olives where Jesus had ascended and the Angelic Being attested to the Apostles that in the same manner and place, Jesus would return.
________________________