'And he told this parable: A man had a fig tree planted in his vineyard, and he came seeking fruit on it and found none. 7 And he said to the vinedresser, ‘Look, for three years now I have come seeking fruit on this fig tree, and I find none. Cut it down. Why should it use up the ground? And he answered him, Sir, let it alone this year also, until I dig around it and put on manure. Then if it should bear fruit next year, well and good; but if not, you can cut it down.’ -Luke 13:6-9

The purpose of this study is to consider some mathematical equations based on the prophetic implications of Israel being the ‘Fig Tree’ as depicted by Jesus Christ. Jesus stated that the generation that would see the rebirth or re-budding of the ‘Fig Tree’ would be that Last Generation that would see His 2nd coming. The following are a suggested correlation based on the 2520 sacred numerical coefficient. If the nation of Israel was that which was ‘reborn’ on May 14, 1948, then adding a factor of 25200 days will converge on Pentecost of May 20, 2018. It is precisely 70 years and 7 days and 7000% of a Biblical Year based on a 360 day/year. Interesting, based on the Omer Count, the declaration of independence occurred on Pentecost during the May 14, 1949 historical and prophetic event. If one adds the same number of days from the Feast of Trumpets of October 4, 1948, it coincides with a Yom Kippur of 2017.

This 70 x 360 Biblical Year factor will occur on October 6, 2017. At no other correlation does it occur. Apparently, the 70-year factor is profound and interwoven in this ‘Fig Tree’ prophecy and foreshadowing of the total restoration from the ‘curse’ that Jesus Christ place on the Fig Tree that produced no fruit. For example, it was in 70 AD that the 2nd Temple was destroyed. If one adds 1948 years, the year Israel ‘re-budded’, then the year equals 2018 which is the 70th year anniversary. Based on previous studies of the Tetrad Template, there appears to be a Before-During-After pattern. If the nation was born before the Tetrad of 1949-50 and Israel ‘sprouted’ and grew during the 1967-68 Tetrad to recapture Jerusalem, will the Temple be rebuild then after the Tetrad of 2014-15?

Many who study to the topic of End Times and the eschatology of Israel would argue that the apparent ‘rebirth’ of the modern State of Israel is not what the Bible has foretold. There are also 2 other camps of contention that come from the detractors of Israel and portray it as nothing more than a Zionist Rothschild conspiracy of the Khazarian kind. Then there are those certain Ultra-Orthodox Jewish sects that also denounce the modern State of Israel as being illegitimate and even side with the enemies of Israel, the Muslims because in there warped theology, Israel or the 3rd Temple for that matter cannot be rebuilt until it is constituted and sanctioned by the Messiah.

If the rebirth of ‘Israel’ as the modern state could be perhaps a Luciferian plot, perhaps but realize that YHVH can use and has used the works of the Enemy to advance His Will nevertheless. However, if 1 restoration, that of the nation could be suspect, perhaps, but not 2. The recapture of Jerusalem in the 6-Day War doubled the odds of this progressive reconstitution of Israel just as Jesus foretold it would. Thus far, in the prophetic sense, it is 2 for 2 in that the State of Israel, although perhaps helped by nefarious elements, it has so far come to play-out as Scriptures bare-out the stipulation that YHVH’s People would be brought back in ‘unbelief. Thus the 3rd factor of Israel’s full restoration will be the rebuilding of the Temple, a 3 for 3 pattern completed based on the Olivet Discourse.

In actuality, there is a 4th factor, that of national Israel recognizing and accepting Jesus as the Messiah. This recognition and unveiling of Jesus Christ will occur per the prophecy of Zechariah at His 2nd coming. In the leading-up to the possible and probably 3rd factor, that being the 3rd Temple, there does appear to be some amazing convergences of ancient timelines that meet-up in 2018. Based on the phi ratio pattern, if the start date is May 14, 1948 the fulcrum of the phi ratio spiral centers on January of 1968. This in turn proportions the phi ratio to January of 1975. Thus with such a proportion, the end day would coincide around the Purim-Passover season of 2018. Wil something prophetically profound occur at that time concerning the Temple Mount? Will the ‘Fig Tree’ typology come to full fruition for the 70-year old Fig Tree?
_______________________ 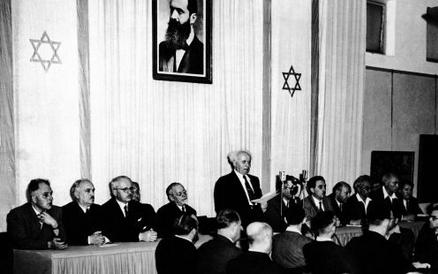