The Great American Total Solar Eclipse darkens the skies all the way from Oregon to South Carolina on August 21, 2017. The expanse of the shadow along a stretch of land is about 70 miles wide. The eclipse has a magnitude of 1.0306 and is visible along the narrow corridor throughout the heartland of the United States as if it is ‘dividing’ it in half. The Longest Duration of ‘Totality’ will be 2 minutes 41.6 seconds at the map coordinates of 37°35′0″N 89°7′0″W. This point is in the Shawnee National Forest just south of Carbondale, Illinois. The Greatest Extent or Maximum is at the map coordinates of 36°58′0″N 87°40′18″W.

This point is near Cerulean, Kentucky between Hopkinsville and Princeton, Kentucky. A solar eclipse occurs when the Moon passes between Earth and the Sun, thereby totally or partly obscuring the image of the Sun for a viewer on Earth. A total solar eclipse occurs when the Moon's diameter is larger than the Sun's, blocking all direct sunlight, turning day into darkness. Totality occurs in the narrow path across Earth's surface, with the partial solar eclipse visible over a surrounding regions. This eclipse is the 22nd of the 77 members of Saros Series 145. This Series is the one that also produced the solar eclipse of August 11, 1999 in the heart of Europe.

Interestingly, out of all the major metropolitan cities that the eclipse will traverse, Nashville will be the one where people will be able to see the eclipse the longest. In a prior study entitled, The United States of ISIS, the study suggested that the total solar eclipse of August 21, 2017 relates in some way to the replica Temple of Ephesus in Nashville and the powers that the goddess it houses represents. In the ancient world, Ephesus was where the 1st Church of the book of Revelation wherein the resurrected Jesus addressed its condition, spiritually and prescribes a remedy for the prognoses.

The goddess of one of the 7 Ancient Wonders of the World was none other than Isis, the Queen of Heaven. Prophetically, the 1st Church of the 7-fold Church Age that would ensue since the Pentecost of the 1st century would be that of those that ‘Lost its 1st Love’. Could this eclipse be accenting the fact that as the 5 Foolish Virgins, were the ones that did not leave with the Groom, metaphorically? The following is the list of the major urban metropolitan areas where the eclipse passes nearby.

The 3 main major cities are divided into 3rds with the Northwest, the Midwest and the South.

The following are the specifics of the Great American Eclipse according to NASA.

Another unique observation about the very topography of the total solar eclipse across the USA is that it approximates the phi ratio proportion. If one ‘blocks-out’ the continental land of the USA with its 4 corners, it construes a rectangle. What the geometric landmass suggests is that based on the resonance of the Earth, the Mississippi River was created at the approximate phi ratio division of the rectangle, topographically.

Moreover, this line is also where the infamous New Madrid earthquake fault-line is situated. Also interestingly is the notion that for illustrative emphasis, if one superimposes the spiral arm version of the phi ratio, the fulcrum is approximately situated where the Maximum of the eclipse will be reached on that day. The next total solar eclipse over the continental U.S. occurs on April 8, 2024. What is unique about this subsequent one is that it will mark an ‘X’ in the ‘heart’ of the USA.

New Order to Come?
Oddly enough if one recognizes the occult numerology, the duration of totality lasts at least 3 minutes and 22 seconds on the east coast of Maine. This is the infamous 322 Skull and Bones Secret Society brand. It will also stretch to 4 minutes and 27 seconds in southwestern Texas. The August 21, 2017 eclipse marks the first time in 99 years that such an eclipse occurs of this nature for the USA. However, the August 2017 event is the first one whose totality path lies completely within the United States since 1776, the founding of the American Republic; some 241 years or at the eve of the 242nd year. The starting point of the ‘Great Eclipse’ is on the waterfront at Government Point, Oregon, at 10:15:56.5 a.m. PDT.

The center line’s last contact with the U.S. occurs at the Atlantic Ocean’s edge just southeast of Key Bay, South Carolina. Interestingly, the center line of the solar eclipse crosses through approximately 10 states. If one does a study of the Biblical significance of this possible numerical inference, the number 10 occurs 242 times. This is equal to the number of years since 1777 and which coincidentally occurs in the year 5777 based on the Jewish Rabbinical Calendar.

The number 10 according to BibleStudy.org, signifies testimony, law, responsibility and the completeness of and ‘order’. Many Bible prophecy students ask if the USA is mentioned or plays a role in the Last Days. Ten therefore represents man's responsibility to keep the commandments of YHVH, which the USA as a divided nation has become and has not kept at this stage of its final ‘division’. The number 10 also has connotations of a sacrifice as the Passover Lamb was selected for slaughter on the 10th day of Nisan. Will America be such a ‘lamb’ led to the slaughter that will facilitate the coming diabolical New World Order? The 10th day of the 7th month in the Jewish calendar is Yom Kippur.

Lastly, the 10 generations since Adam ended with Noah and perhaps such an association could see the ‘New World Order’ transference on such a year. Another unique astronomical association to take note of is where the eclipse occurs, in Leo. Those that study a measure of astronomy and Biblical prophecy will early-on realize that Leo specifically pertains the Redeemer, the Conquering Lion of the Tribe of Judah. Leo is the type of Christ that was promised, came and will again. It is also the end of the Mazzaroth or Zodiac as Virgo is the commencement of it. Moreover, the Leo constellation has the Royal Star of the known Cosmos, that of Regulus which conjoins the total solar eclipse on August 21, 2017.

Another very unique attribute in terms of time is that the eclipse is also exactly 33 days away from the astronomically alignment of the Great Sign of Virgo of the book of Revelation 12. Here again is the question. Does this 33 coefficient that is used of the Luciferians in their Secret Society imitations and equals the summit of their All-Seeing Pyramid motif possibly relate to an initiation? Will the coefficient of the Jewish year 777, signify the dividing and ‘death’ of the ‘Old Phoenix’ for their coming New World Order? What is also interesting is that it will be exactly 30 days or 1 Jewish lunar month cycle from the total solar eclipse of August 21, on the 21st of September on Rosh HaShanah.

On this day just prior to the Great Virgo Sign, Venus conjoins with the King Star, Regulus in Leo. Then on the 3rd day, the Great Virgo Sign of Revelation 12 astronomically appears to occur. Thus technically, the Great Virgo Sign occurs in the Jewish year of 5778. Another very unique astronomical marker is that the total solar eclipse on August 21, 2017 called the Great American Eclipse approximates the Astronomical Cross. This is seen if one juxtaposes the eclipse against the Solar System view of the planet’s orbits. The positioning of the eclipse is offset approximately in terms of time by 1 month or one Jewish lunar month cycle. This Astronomical Cross mirrors the 4 main cardinal points of the known Universe with Leo, Scorpio, Aquarius and Taurus.

These 4 motifs are also the very ones that constitute the 4 Living Creatures in the Throne of YHVH in Heaven. Also during the eclipse as seen from the Midwest heartland of America, the planet Venus will be approximately ~33 degrees west-northwest from the Sun. Another very unique attribute about the 33 numerical coefficient related to this Great American Eclipse has to do with the Black Moon. The New Moon that will cause the total solar eclipse on August 21, 2017 will be a Black Moon. This particular Black Moon is the 3rd New Moon in a season with 4 New Moons, which makes it rare combination. According to TimeAndDate.com, these Black Moons are a little rarer, and occur about once every 33 months.

Astronomers divide a year into 4 seasons - spring, summer, fall and winter. Usually, each season has 3 months and 3 New Moons. Although there is officially no single definition, a Black Moon occurs when a season has 4 New Moons, the 3rd New Moon is called a Black Moon. This is the exact counterpart to the original definition of a Blue Moon, except that Blue Moons are Full Moons. The research went on to state that Black Moons hold special significance to people who practice certain forms of Pagan religions and who believe certain actions become more potent when performed on the night of a Black Moon.

In summary, the possible implication could be how the Luciferians that rule and run the USA use the national-politique to attempt to divide Israel’s land. It is rather ominous that the total solar eclipse that has not occurred ‘sea to shining’ sea since 1776 is accented in the constellation of Leo. Could this 1776 benchmark and Biblical meaning have a possible inferred that with the dividing of the USA will have been completed and the ‘Order’, that of the New World Order is to subsequently begin as a result? Why a ‘division’ would possibly be signified by such an eclipse? Many are convinced that the Luciferian axiom of ‘Divide and Conquer’ of America is about complete, specifically since 9-11and perhaps to occur in astronomically conjunction with the Great American Eclipse.
_________________________ 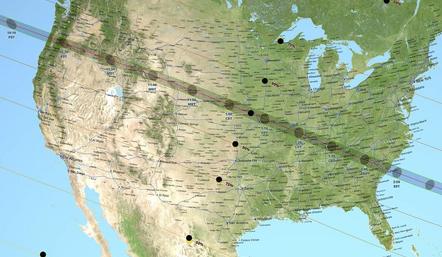