Transcribed by Luis B. Vega

The purpose of this information piece is to present a written transcript of an interview with Dr. Carrie Madej. It is from Fact News Network YouTube channel. It is an interview among many she has done since the COVID-19 contagion was released. However, due to her videos being censored by YouTube and taken down, it is important to have a transcript in written format. It documents the important information that goes contrary to the ‘official scientific narrative’ concerning COVID-19.

Dr. Carrie Madej, DO is an Internal Medicine Specialist in McDonough, Georgia, USA and has over 19 years of experience in the medical field. She graduated from Kansas City University of Medicine, Bioscience College of Osteopathic Medicine medical school in 2001. She directed two large medical clinics in the State of Georgia, USA. Since her 20’s, she has been fascinated by vaccines and studied them ever since. Her in-depth research led her to discover what the proposed technologies are for in the new COVID-19 vaccines and warns of the dangers it possesses. She has passionately embarked on a quest to inform the public about.

‘I think that the people of the United States need to know that the President signed over an Emergency Act. And when he did that, he lost all of his power. As a Sitting President, he really is just a figurehead, a puppet in essence. FEMA has [been] now ruling our country and will continue to rule until the Emergency Act is taken off. And because of that, we need to know that whoever is elected cannot have that much power because FEMA really has the power right now, So, unfortunately if you think that is going to be a miracle with the election, I think that you are very wrong. But right now, we need to depend on all of us together, banding together in unity.

The American People need to come together. Forget our differences. Forget our differences with religion, our racial differences, creed, color, whatever. And stand up and voice what is important for us and Humanity. The Emergency Act has ruined everything. Also, people need to know with the Emergency Act our ‘Checks and Balances’ for the safety of medicines and vaccines has been thrown out the window. We no longer have such safety measures. I have never seen any anything like this in my career. Even the Food and Drug Administration FDA has no idea what is in these vaccines about to be implemented and mandated on us. So, we need to be very concerned.

So, I tell people, I have knowledge on these vaccines, not just because I research them and look up information. I am a physician and I attended certain meetings. And one of the meetings…was around 6 or 7 years ago. It was a World Congress Meeting and the Keynote Speaker was Dr. Craig Venter who was part of the Human Genome Project, one of the Founders and he was up there. And I will just recap a little bit of the intro to his speech was. That, ‘What is God?’ ‘God creates’. ‘Well, now we can create, so now we are Gods’. And that should tell you the whole theme of what he was about to talk about. So, this all kind of revolved around Transhumanism.

About altering the genome of organisms including humans. And he said that the team of Scientists that he was working with when they altered the genome of an organism, an animal plant, even human, that they were proud of their work because they were putting something different. They were creating something brand new. So, they thought they should get credit for that. So, they were actually putting their names into the genome of the organism. So, a genome can be read like a language, like any other language. So, they were actually putting the code into the genome and that could be permanent. I mean, imagine being branded with someone's name inside of the most precious part of what makes us human.

To me, we were made in the likeness of God. God gave us the instructions; gave us that genome. That if we uncurled it out would be 10 billion miles in one human being. That is a lot of information and they're putting names in there. And they also said they were putting messages in there, but they never told us the message that would be put into the genome. And also, on that same vein, just know that once they synthesize or make something synthetic in you, they have the right by the U.S. Supreme Court Justice to own part of you or even all of you. Literally own that part of the gene or genome to this day. People need to know what you are signing up for.

Because what would happen, would we owe royalties on the patent once we copied it to our offspring? This is crazy stuff, but this is real. About technology used for resurrecting dead people? There is lots of different methods, you know cryo-freezing and we were just talking about that yesterday. Walt Disney supposedly is cryo-frozen. His body is cryo-frozen and lots of people are doing that. And in this meeting by chance, this is a Transhumanist concept. In this World Congress Meeting, they were talking about that very thing. That you know perhaps we can always live forever. That is Transhumanism to go beyond what is normal for a human.

So, they could do that by many ways. They are talking about uploading our memories, our thoughts, our brain into the Cloud, or to whatever computer. And then downloading them into a new body. But is that really you? I think we are more than thoughts. We are more than memories. We are souls and spirits. But to them, they thought this was ‘living forever’. Also, they brought up cryogenics and other things like that. Also just taking a cell, cloning it, cloning yourself again. There is all different things they are talking about. They believe in that sort of way to go. I think that it would be hell to me. I would never want that kind of life. I believe in God. I believe in spirit, our soul. And I would never give that up. My YouTube channel is Dr. Carrie Madej.I am getting censored a lot, so I am on Library TV, Band Video, Brand New YouTube; all different kinds of platforms.'
________________________ 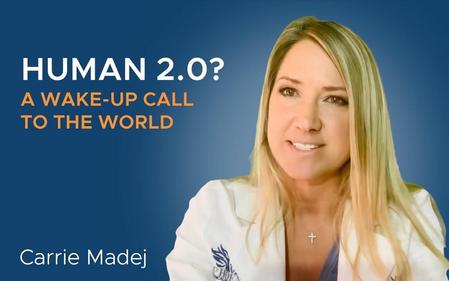