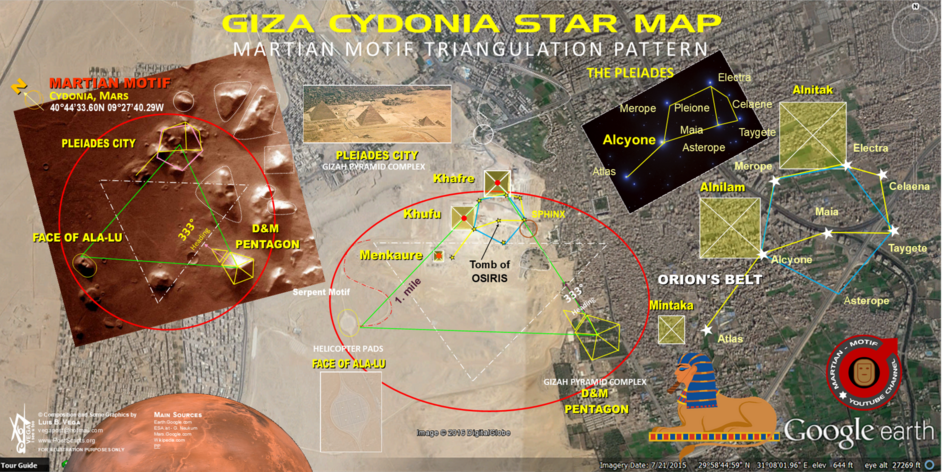 #168:
​GIZA CYDONIA STAR MAP
PLEIADIAN PYRAMID PATTERNS
A Study in the Celestial Correlations of the Stars

The purpose of this illustration is to suggest that the entire core of the Giza Pyramid complex in Egypt is construed to mirror the Cydonia, Mars pyramid complex. After all, Cairo which is adjacent to Giza means Mars and it is associated with the God Ares or the God of War. What this study suggests is that the entire Martian motif corresponds to entire Giza pyramid complex with the 3 main structures of Cydonia in Mars. The Martian motif is made up of 3 main structures to include the Face of Mars, or that of Ala-lu, the 7 main structures of the Pleiadian Pyramid City and the Pentagon Pyramid. These structures are approximately replicated onto the Giza pyramid complex when superimposed from a top view. Both the Earthly and Marian layouts also correspond to the northerly direction although the reflected motif on Giza is inverted 180 degrees and rotated about 72 degrees. The various ley-lines of each also corresponds to similar angles and degrees. There are a few slight variations that will be noted.

As to the Martian motif over Giza, the Face of Mars corresponds to an oval-like configuration made in the desert and to the west of the motif. The Pentagon Pyramid corresponds to a patch of greenery land in a pentagram outline to the east. By far the most interesting aspect of this Martian motif superimposed on the Giza Plateau is that of the Pleiades Pyramid City that corresponds to the 3 pyramids of Giza. The Pleiadian star cluster is corresponding exactly in sync with the geometry and angles of the 3 pyramids which are Khafre or the Great Pyramid, Khufu and Menkaure. The approximate length the 3 pyramids corresponds so the length or span of the Pleiades star cluster. In turn the Giza 3 pyramids comprise an encrypted pentagram as it does on the Martian Pleiades Pyramid City.

The 5 points of the pentagram corresponds to the corners of the 3 pyramids of Giza, the Sphinx and the ley-line of the inverted triangle that constitutes the hexagram. At the core of this geometric pentagram is the star Maia that correlates to the Tomb of Osiris.  Directly south of the Maia star correspondence is the star Asterope. This star is said to be the ‘gateway’ star that leads to the core of the Pleaides. On the Giza configuration, this star, Asterope is on the very ley-line of the inverted triangular base that construes the hexagram of the entire motif. Perhaps there is a corresponding structure there buried in the sands of time that needs to be excavated and that could be shown to be some sort of ‘Stargate’ perhaps. The star Taygete corresponds to the Sphinx. The star Atlas corresponds to the smaller of the 2 pyramids, Menkaure or Mintaka of Orion. The star Alcyone which is the most prominent star of the Pleiades corresponds to the southeast corner of the 2nd Pyramid, Khufu or Alnilam of Orion.

The star Merope correlates to the halfway point between the Great Pyramid, Khafre or Alnitak of Orion and the 2nd Pyramid and is on the 45-degree slope ley-line. The star Electra corresponds to the southeast corner of the Great Pyramid and so on. What is also amazing is that the various other lesser structures of the Martian pyramid complex are replicated at the Giza Plateau. For example, next to the Face of Mars is a prominent oval structure with 4 smaller ovals at each corner. This structure on Mars is also correlated next to the oval depiction on Giza’s version of the Face of Mars. Next to the Pleiadian Pyramid city to the north is a structure and to the northeast of it are 2 other pyramid shaped structures. One is a sort of circular triangle adjacent to another ‘heart’ shaped triangle-like structure. The following are some approximate measurements taken from GoogleEarth coordinates.

These 3 structures on Mars are replicated to the north of the Great Pyramid is the same general outline. There is also a massive structure in-between the Pyramids of Giza and the area corresponding to the Pentagon Pyramid greenery patch of land. This corresponds the structure that is also in-between the Pleiades Pyramid City and the Pentagon Pyramid on Mars. This triangulation comprises the hexagram as a 2nd triangle of the same proportion is inverted upon itself. The triangle of the Martian motif corresponds to the alignment angle of the 3 pyramids of Giza that have a 45-degree angle. The apex of the hexagram corresponds so the center point of the Great Pyramid.

The hexagram motif construed at Giza is a bit elongated but this provides a proportion that incorporates the ‘Serpent’ motif that is also found in many of the other sites around the world in some form or fashion. In most cases it was a river that construed this motif. In modern times, such Martian motifs have freeways or avenues that depict this ‘Serpent’ weaving within the ‘hexagram’. In the case of Giza, the ‘Serpent’ motif corresponds to the span of the bases of the 2 triangles that construe the hexagram from a top view. The starting point and ending point meet at such ley-lines. The ‘Serpent’ design with a ‘S’ curvature is made by a road leading to the spot where the ‘Face of Mars’ is situated at.

What is astonishing is that no other celestial motif from any other planet but Mars and no other area but the Cydonia complex on Mars has been replicated from ancient times on Earth. What has already been discovered by many researchers is that the 3 main pyramids of Giza pertain to the celestial Belt stars of Orion. In fact, the whole Nile River course-way mirrors the Galactic Meridian or the Milky Way with various Egyptian pyramid complexes mirroring the correlating constellations. It is amazing that the geometry of the Cydonia, Mars layout over the Giza Plateau has not yet been discovered. This is aside from those that intentionally put it there since the Pyramids were constructed and those that keep such a Martian motif encrypted with modern ley-lies that match it still.
________________________