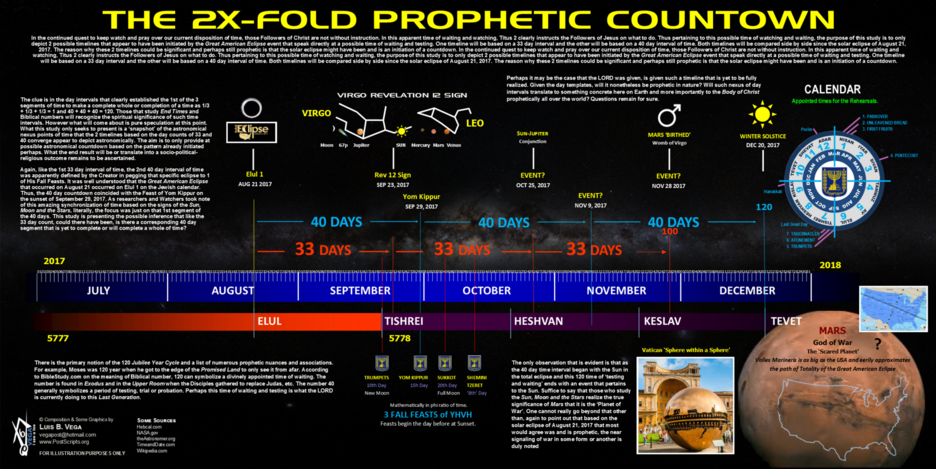 ‘It instructs us to renounce ungodliness and worldly passions, and to live sensible, upright, and godly lives in the present age, as we await the Blessed Hope and Glorious Appearance of our Great God and Savior, Jesus Christ. He gave Himself for us to redeem us from all lawlessness and to purify for Himself a people for His own possession, zealous for good works.’ –Titus 2:12-14

In the continued quest to keep watch and pray over the current disposition of prophetic time, those Followers of Christ are not without instruction in this Last Generation. In this apparent time of waiting and watching, Titus 2 clearly instructs the Followers of Jesus on what to do. Thus pertaining to this possible time of watching and waiting, the purpose of this study is to only depict 2 possible timelines that appear to have been initiated by the Great American Eclipse event that speak directly at a possible time of waiting and testing. One timeline will be based on a 33 day interval and the other will be based on a 40 day interval of time. Both timelines will be compared side by side since the solar eclipse of August 21, 2017. The reason why these 2 timelines could be significant and perhaps still prophetic is that the solar eclipse might have been and is an initiation of a countdown.

The clue is in the day intervals that clearly established the 1st of the 3 segments of time to make a complete whole or completion of a time as 1/3 + 1/3 + 1/3 = 1 and 40 + 40 + 40 = 120. Those that study End Times and Biblical numbers will recognize the spiritual significance of such time intervals. However what will come about is pure speculation at this point. The overall arching speculation is always relegated to the ‘Rapture Event’ as many have tried and still try to fit the Rapture to some Fall Feasts of YHVH or astronomical alignment. There is a dilemma as many researchers and Watchers of the End Times are forced to not argue against a double-negative. In what way? When some purport that the ‘Rapture’ is going to happen on this or that specific day, one cannot really argue against it. Why?

This would mean that those opposing such a notion or speculation would then ‘know’ that the Rapture will not take place on that specific date as that is still unknowable. What this study only seeks to present is a ‘snapshot’ of the astronomical nexus points of time that the 2 timelines based on the day counts of 33 and 40 converge appear to depict astronomically. The aim is to only provide at possible astronomical countdown based on the pattern already initiated perhaps. What the end result will be or translate into a socio-political-religious outcome remains to be ascertained. The 1st time interval that could be prophetic is the 33 day count. The benchmark will be and perhaps was and is still the solar eclipse of August 21 2017.

As many are now very aware of the intricacies, the amazing variables and attributes of this astronomical event was saturated by the numerical coefficient of 33. As the list of ‘33’ variables grew leading up to the event, many researchers and watchers of the End Times and those looking for the Rapture event may not have realized that this .33 numerical interval could have been one of 3 segments of time yet remaining to be completed. Again, a completion of what time? That event remains to be seen. It is safe to assume though that the template was laid as the 33rd day interval from the solar eclipse as it coincided with the Great Sign of Revelation 12. The following is the known variables of why the numerical factor of 33 found associated with this 2017 Great American Eclipse could very well be prophetic.

Perhaps it may be the case that the LORD was given, is given such a timeline that is yet to be fully realized. Given this 33 day template, will it nonetheless be prophetic in nature? Will such nexus of day intervals translate to something concrete here on Earth and more importantly to the Body of Christ prophetically all over the world? Questions remain for sure. Nonetheless, here are the dates that the 33 day intervals land on from August 21, 2017 solar eclipse. The first has occurred with the Revelation 12 Sign on September 23, 2017. The 2nd 33 day interval occurs on the sunset of October 25, 2017. The 3rd part of the 33 day interval that completes the whole to make a 1 or 100% completion of time since the Great American Eclipse is on November 28, 2017.

In examining the astronomical correlations, the clue was apparently the Great Sign of Virgo as it seems to suggest by the solar eclipse that it had to do with the constellation of Virgo. If that could be the case, then the only possible and significant conjunction occurring in the 2nd 33 day interval is the meeting up of Jupiter with the Sun in Virgo. The end point of the last of the 33 day intervals does have the planet Mars being ‘birthed’ at that time over the threshold of the ‘line’ that delineates the ‘womb’ of Virgo. On this 100th day, it is interesting as Mars will be the last of the celestial orbs that astronomically made up the Great Sign of Revelation 12 to leave the constellation.

Mars will leave Virgo by the end of the year. It is as though Mars, being the ‘last will be the first’ as the Gregorian New Year will see it clear Virgo and move on into Libra at that time. Thus, in terms of this 1st astronomical time segment of 33 days, could the completion of the timeline on one hand signify a possible prophetic implication? The other supposition is then could this possible completion of a time that could be prophetic have to do with what Mars represents? The 2nd time interval of day has to do also with the benchmark time marker of the solar eclipse of August 21, 2017 as it pertains to the 40 day count. It was well researched and presented that, in fact such an astronomical occurrence was and is Biblically significant and prophetic. There were also clear and agreed upon theological parallels to the times of Nineveh’s warning of a 40 day countdown to repentance, etc.

Again, like the 1st 33 day interval of time, the 2nd 40 day interval of time was apparently defined by the Creator in pegging that specific eclipse to 1 of His Fall Feasts. It was well understood that the Great American Eclipse that occurred on August 21 occurred on Elul 1 on the Jewish calendar. Thus, the 40 day countdown coincided with the Feast of Yom Kippur on the sunset of September 29, 2017. As researchers and Watchers took note of this amazing synchronization of time based on the signs of the Sun, Moon and the Stars, literally, the focus was just on that 1st segment of the 40 days. This study is presenting the possible inference that like the 33 day count, could there have been, is there a corresponding 40 day segment that is yet to complete or will complete a whole of time?

What is that total day count then? If one uses the 33 day template, then likewise the 40 day time interval would have 3 segments of 40 days each for a total of 120 days. The 1st 40 day segment was clearly defined to correspond to September 29, 2017, Jerusalem time. This corresponded to Yom Kippur as most would not argue with this nexus of time. Thus the following delineations of the 40 days would be as follows for the Great American Eclipse of August 21, 2017. It is an amazing correlation of how the Creator synchronizes the signs of the Sun, Moon and the Stars to His Feasts. It is also telling of how in reality, if one peals back the theological layers of the Feasts of YHVH, at the core and elementary level, the timing of the Feasts have to do with Astronomy and having to look up and interpret the Moon phases.

Nonetheless, the 2nd 40 day time interval from the solar eclipse of August 21 occurs on November 9, 2017. In observing the constellation of Virgo at this time, the astronomical model does not really suggest any astronomical significance that one can tell of overtly at least. The 3rd and final 40 day segment of time occurs on December 20, 2017. This is on the eve of the Winter Solstice. Again, nothing in particular appears to ‘jump out’ in terms of prophecy but perhaps such has been the case that the LORD has been revealing only what is necessary at the moment. This 120 day time interval would ring bells as those that study the End Times realize that this numerical coefficient is also a prime signature of the Creator.

There is the primary notion of the 120 Jubilee Year Cycle and a list of numerous prophetic nuances and associations. For example, Moses was 120 year when he got to the edge of the Promised Land to only see it from afar. According to BibleStudy.com on the meaning of Biblical number, 120 can symbolize a divinely appointed time of waiting. The number is found in Exodus and in the Upper Room when the Disciples gathered to replace Judas, etc. The number 40 generally symbolizes a period of testing, trial or probation. Perhaps this time of waiting and testing is what the LORD is currently doing to this Last Generation. The only observation that is evident is that as the 40 day time interval began with the Sun in the total eclipse and this 120 time of ‘testing and waiting’ ends with an event that pertains to the Sun. Suffice to say that those who study the Sun, Moon and the Stars realize the significance of Mars that it is the ‘Planet of War’.

One cannot really go beyond that other than, again to point out that based on the solar eclipse of August 21, 2017 that most would agree was and is prophetic, the signaling of war in some form or another is duly noted. What is of possible significance is the following example of a prime speculation associated with the eclipse’s Path of Totality and Mars. In what manner? The planet Mars has the prominent feature of a ‘scar’ path near its equator know as Valles Marineris that is eerily the approximate size of the USA and its path is similar to that of the solar eclipse that crossed the USA. Although this is a clear stretch of the imagination, the similarity is noted only due to the Great American Eclipse having such a similar path and how the 33 day interval of the 100 days points to Mars. This is also only half the story as the understanding of such ‘signs’ and day intervals need to be discerned properly by the researchers and Watchers.

There is room for some speculation and educated guessing, however the current frenzy of the Rapture timing has run amuck. With that in mind, this study has sought to only provide a clear ‘snapshot’ of the possible time intervals and depict the possible astronomical highlights with a limited inference to possible implications, that is all and all one should and can do, at this time. Beyond that is where one crosses over into the speculation and human interpretation and it can become knowledge based on human wisdom or lack thereof. What is the danger in this? Well, as the Apostles warned, the Body of Christ should not be ‘tossed to and fro’ with such vein suppositions and ‘winds of doctrine’ that will lead some to ‘shipwreck’ their faith as the Apostle rightly knew would and will happen. If there is ever a time for the Followers of Jesus to be grounded and assured of and in His Word, now is the time.
________________________ 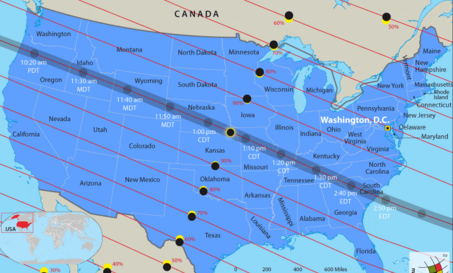