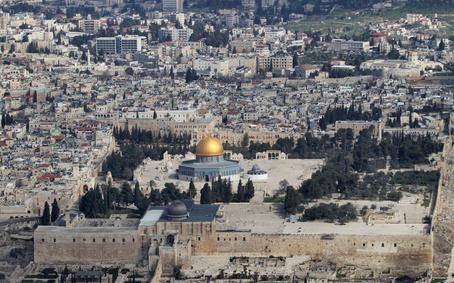 #154:
​TEMPLE MOUNT ORION
BATTLE FOR DOMINION ON EARTH
YHVH's Earthly Throne as it is in Heaven

‘Thus says YHVH, "Heaven is My throne and the Earth is My footstool. Where then is a House you could build for Me? And where is a Place that I may rest? For My hand made all these things, Thus all these things came into being," declares YHVH. "But to this one I will look, to him who is humble and contrite of spirit, and who trembles at My Word.’ – Isaiah 66:1-2

The following suggests that the Temple Mount incorporates the celestial pattern of Orion’s Belt star alignment. The 3 main structures of the Temple Mount presently appear to correspond to the Great Pyramid of Giza complex also in angle and orientation. Currently the size is reversed as the Al Aqsa mosque corresponds to the Great Pyramid. The Dome of the Rock corresponds to the middle pyramid and star and the Dome of the Spirits corresponds to the smallest pyramid and star of Orion’s Belt. Based on this assertion, it could be very possible that the orientation of YHVH’s place of His Throne is situated in Orion. Out of all the 12 constellation, perhaps Orion is the one that was chosen. Numerous pyramid complexes of the ancient civilization also had this composition so it must have been extremely significant.

The span of the constellation Orion as all other constellation are in a phi ration proportion. Was is amazing is that given the proportion of Orion’s divination, the middle star, Alnilam corresponds to the fulcrum of the phi ratio spiral that is used for greater emphases. If the Creator uses His Signature in all that exists, surely the Heavenly realities of the Earthly types are fixed to such dimensions also as is time and prophecy according to this researcher.  The Temple Mount is a religious and political flashpoint that will someday see the rebuilding of the 3rd Temple. Jerusalem is superimposed onto the Orion constellation to suggest that the stars match the Gates of Jerusalem. Perhaps thus the Earthly pattern is mirroring the Heavenly as was the Tabernacle and prior Temples.  The Temple has been shown to be anthropomorphic and currently has
the form of the Luciferian’s image based on the Baalbek octagonal relationship based on the Dome of the Rock that is administered by the Muslims.