#44:
​SURVEY OF THE UNIVERSE
CELESTIAL 4 QUADRANTS
Mirroring the Throne Room of YHVH

‘O LORD of Hosts, God of Israel, enthroned above the Cherubim, You alone are GOD over all the Kingdoms of the Earth. You made the Heavens and the Earth’. -Isaiah 37:16

The purpose of this illustration is to depict the Universe from a Stereographic perspective and how that configuration approximates the 4 ‘Corners of the Universe’. More specific, is that these 4 Celestial Quadrants represent the 4 Cardinal Points and in turn correspond to the mirrored depiction of the very Throne of YHVH, the Creator in Heaven. It is in the Bible that one sees this configuration of having the 4 Cardinal Points of the Universe correspond to the 4 Living Creatures. These 4 Living Creatures are called the Seraphim with 6 wings and are a special class within the hierarchy of the Angels.

There is the Man, Ox, Eagle and Lion. They are the ones that proclaim day and night, ‘Holy, Holy, Holy, is the LORD GOD Almighty’. They support the Throne of YHVH and are seen in a combination of 1 body with the 4 heads or as individual heads to 1 body. One would contend that this heavenly pattern casts its shadow upon the created Universe in similar fashion and even to Earth, Jerusalem and the Temple of YHVH. And this appears to be the case astonishingly. There are the 4 Cardinal Points that likewise correspond to the 4 Living Creatures.

The 4 Cardinal Points are consisting of Aquarius, the Man with its corresponding Star, Fomalhault. Then there is the Scorpio with its Star, Antares. In ancient times, this was the Eagle motif.  Then there is Taurus, the Bull with its corresponding Star Aldebaran. Lastly there is Leo the Lion with its Star Regulus. What is also astonishing is that such a celestial configuration in this circular rendition places Draco the Dragon at the very center.

And more precisely with the Star Thuban which at one point due to the Precession of the Equinoxes was the North Star in which all other Stars of the Universe revolved around. This Universe Center oscillated between this Star, Vega and the Little Dipper. Interestingly, given this position and motif, if one extends the 4 Cardinal Points with lines, it forms a ‘Cross’. It is as if the ‘Serpent’ is being ‘crucified’ on the ‘Celestial Cross’. This is precisely a prophetic echo of what Jesus would come to Earth to do as He died as the metaphorical ‘Serpent’ on the Cross of Calvary.

Magestic Mirrors
This is what Jesus told Nikodemus in that, ‘As Moses lifted up the Serpent in the Wilderness, so too must the Son of Man be lifted up.’ This is not to suggest that Jesus is some ‘reptilian’ being of an ‘Alien Race’ as many would and do suggest. Jesus became 100% human and took on flesh to redeem Adam’s fallen race, not the Fallen Angels or any Reptilian Draco’s that might exist, etc. This 4 Quadrant depiction of the Throne of YHVH, the Universe and the Mazzaroth also extended to how the camp of the Israelites configured their 12 Tribes. The 12 Tribes of Israel thus also, amazingly correspond to the 12 Signs of the Zodiac or Mazzaroth.

And thus, in the midst of the encampment was the Tabernacle that represented the Throne Room of YHVH like it is in Heaven. Sadly, there is also a Luciferian counterfeit as Occultists use the same motif but ascribe it to Lucifer and their rendition of the configuration. How so? For example, the emblem of the World Health Organization that has essentially dictated a Medical Martial Law worldwide has this motif. Consider how it has now been through forced vaccination in the name of ‘Public Health’ their New World Order will have been established to a large extent.

They too have a similar ‘Draco’ or Serpent on a pole, as in ‘tree’ or Cross rendition in the midst of the expense of the circular depiction of the Earth. It echoes for them how Lucifer, who is called the ‘Serpent of Old’, will seek to take the place of Christ Jesus and rule the Earth from Jerusalem, from the Holy of Holies as a usurper of the very earthly Throne of YHVH. The last echo of this 4 Quadrant Celestial Motif is seen in the New Testament with its 4 Gospels. Each of the 4 Gospels represent a facet of the ministry and personage of Jesus Christ. Jesus was a Man and thus corresponds to Aquarius.

This Gospel corresponds to Matthew in how the emphasis of Jesus was that He was a human. Then ther was the Gospel of Mark. This Gospel correspond to the Ox or Taurus the Bull that has the Pleiades, or the ‘Congregation of the King’. This Gospel depicts how Jesus was the Servant. Then there is the Gospel of Luke that represents the Kingship of Jesus and thus the Lion or Leo constellation. Jesus was of the Tribe of Judah whose standard was the Lion, etc. Then lastly, there is the Gospel of the GOD-Man, that of John in how that corresponds to the Eagle which speaks of divinity and how Jesus claimed He was GOD in flesh, the Creator, etc.

And ultimately that the 4 depictions or facets of Jesus’ ministry and deposition were centered and realized at the Cross of Calvary. Such a majestic celestial configuration cannot be mere coincidence or a random act of ‘evolution’ This celestial array that casts its shadow off of the very Thone Room of the Creator is but an evidence that the Cosmos, the entire Universe is patterned and designed intelligently by a Creator.
__________________________ 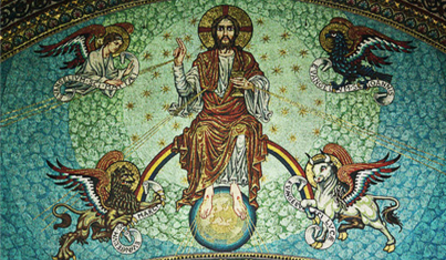