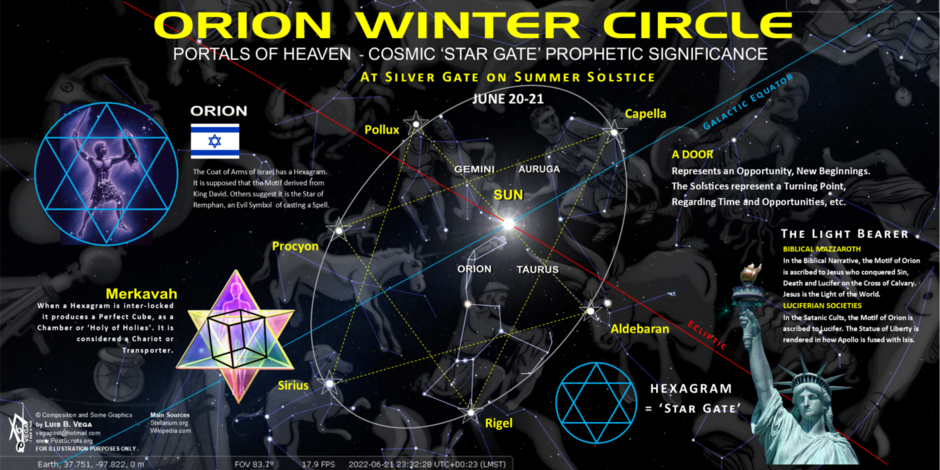 #639:
7 REASONS WHY ISRAEL WILL
GO TO WAR WITH 6 ENCIRCLED
MUSLIM ENEMIES THIS SUMMER
An Astronomical Survey of the Summer Solstice
Orion Circle at the Silver Gate​

‘When the Waters become hard as Stone and the Surface of the Deep is Frozen? Can you bind the Chains of the Pleiades or loosen the Belt of Orion? Can you bring forth the Constellations in their Seasons or lead out the Bear and her Cubs?’ -Job 38:30-32

The purpose of this study is to consider the Orion Circle that is Astronomically encircling the Silver Gate of the Cosmos, with Orion as its Central Character. At this ‘Door’ or Star Gate is the Celestial Guardian, Orion. He comprises the Celestial Motif, having 7 Stars and depicted with the Torch of Fire, of Illumination and Freedom. It is what many Statues around the world are patterned after, primarily that of Libertas having the 7 Rays of Light protruding from the Head as seen in the U.S. Statue of Liberty. What one likes to compare is how this Orion Circle will have the ‘Torch Effect’, caused by the Sun as it lights-up Orion’s Torch on the Summer Solstice, that being on every June 20-21.

Why this is or could be Geo-Politically Significant is that it is where and when the Sun is at, at the Silver Gate, that it is where and when one should be taking note of. The event could be a Sign that is being emphasized. Thus, the Watchers of the End Times could ascertain possible Prophetic Innuendos because of the Sun’s position, Astronomically in the Orion Circle. To this end, one will present 7 Reasons why Israel will go to War with the Encircled Muslim Enemies, sometime within the 3 Months of Summer. This is what one sees, as an Astronomical Survey of the Summer Solstice Orion Circle that is going to be mirrored on Earth with Israel. Why just Israel? First, a short Description of what the Orion Circle is about will be presented. The Orion Circle is a composition of 6 Major Stars that surround the Constellation of Orion, having 7 Stars.

The 6 Star form a Geometric Encirclement of a Hexagram wherein, the Silver Gate is nearly Dead-Center. Orion is the Center-Piece within the Hexagram Circle. Some call this Motif a Hexagram, the ‘Star of David’. And it is the National Emblem on the State of Israel’s Modern Flag. It is in the Center with 2 Flanking Blue Bars across the Tapestry of the Flag that denote the Extent of the Land Covenant that YHVH made with Abraham. In Genesis 15, it states that Israel would be granted a Land from the River Euphrates to the River Nile. This has yet to be accomplished, but will during the Millennial Kingdom, once Jesus returns to Earth to rule from Jerusalem, Israel, etc. There are others though, as there is always an Anti or Opposing Definition, mainly coming from the Luciferians.

The Enemies of Jesus Christ have attempted to hijack the Narrative of the Mazzaroth or the Zodiac in how all the Motifs Meanings are inverted. This to suggest that the ‘Star of David’ is said to have never been a Family or National Emblem of King Davis or Israel. And that in fact, it is the Satanic Symbol of the Ancient God of Remphan. It is a Symbol that was brought-up by YHVH in how He condemns it as many in Israel rather Venerated it and followed after that ‘God’, being Lucifer, etc.

And to also note that the Hexagram is used by the Occult in Casting Spells and conjuring-up Demons and Fallen Angels. How so? Through Sorcery, Black Magic and Blood Sacrifices, the Hexagram, when 3-Dimensionalized produces a Perfect Cube. This becomes the ‘Chamber’, or Door or Star Gate in which Entities appear and disappear, etc. And what would these 6 ‘Stars’ encircling Orion be? Clockwise from Northern Orientation are the following.

And what about the Motif of Orion as Libertas and the Statue of Liberty? It is suggested by some People who study the Luciferian Occult, that the Statue is portraying a Personage that is Gender Fluid. It is a deliberate representation of the mixing of the Sexes, Powers and Purpose of the Male God, Apollo and the Female God, Isis. It is essentially Lucifer in Drags, the Original ‘Transvestite of the Cosmos’. It is this Hexagram used to cast a Spell in this Last Generation. Of what? The Trans Energies that wreak havoc on the West’s Young Generation, right down to Babies wherein Sexuality is being taught to Kindergarteners, etc. So, now, how does the Orion Circle come into play with Israel, an Encirclement, the Summer and a Star Gate?

1. The Summer Solstice is a time of Transition. It signifies a Turning Point as that is what the Seasons of the Year represent. In this case, June 20-21 is the Astronomical beginning of the 3 Months of Summer. Thus, one can expect that in World Events and specifically regarding Israel, a Transition and Turning Point has been reached and will be played-out. What that will be, remains to be seen. But if what the News coming out of Israel and the Middle East is suggesting, there will be War, as the Encirclement of Israel is what the 6 Stars that surround Orion, in this case represent, an ‘Encirclement’.

2. The Orion Motif represents the Dichotomy of the Person. What does that mean? It means that, for example, in the Biblical Narrative of the explanation of the Constellations, it is the Storyline of the Savior. It demonstrates, with each Constellation Personage and Motif a particular Segment or Chapter in the Redemptive Work of Jesus Christ, the Greater Orion. Orion is Famous in all Civilizations as the Mighty Hunger, the Conquering Warrior, etc. He is the ‘Light of the World’ who has overcome Sin, Death and Satan, etc. However, the converse is true for the Luciferians, who attribute this Celestial Guardian of the Silver Gate to Lucifer, and/or the AntiChrist. It is Lucifer that is portrayed as the Savior of Humanity in how he defied the GODs and brought down to Earth, the Forbidden Fire of Illumination and Knowledge to Humanity. It is a Promise to make Humans as ‘God’s, etc.

3. The Silver Gate represents a Door of Opportunity, at the Time that the Sun traverses through it. It is at the Center of the Orion Circle and it appears to be ‘Activated’, Astronomically. It is when the Sun does go through this ‘Door’, at this Time and Place in the Cosmos, exactly on June 20-21. What the Silver Gate represents is ‘Opportunity’. How and what that will look like on Earth, Geo-Politically, concerning Israel is to be seen. But again, if any indication of just how dire the situation is in the World at Large and for Israel, specifically, it is an Opportunity for the Encirclement of Israel’s Muslim Enemies to Collectively Strike ‘Orion’, or Israel. It is also an Opportunity for Israel to Strike at the Encircling Enemies that seek to destroy Israel.

4. The Orion Circle is a Motif of Israel, in the sense that Orion, being Encircled by a Hexagram can be attributed to the Star of David and thus, a Euphemism for Israel. Or in Metaphorical Terms, it is Israel’s Time to Shine based on the Summer Solstice Sun ‘Torching’ the Lamb that Orion is holding, directly at the Celestial Gate. Israel has, miraculously risen from the Ashes and Ovens of the Concentration Camps in Nazi Germany during World War 2 to become the 8th Most Powerful Nation on the Planet. Thus, to have this Celestial Correlation of the Sun Illuminating the Torch on the Summer Solstice is an Astronomical Indication that the ‘Lights have been turned on’, for Israel from this point going forward but specifically during the 3-Month Summer Season.

5. So, this to suggest that during the Summer of 2022 from June 20 to September 20, the World will be focusing on Israel and what might come of such Geo-Political outcomes, yet to be determined. One can take a Political Science Educated Guess and suggest that it will be War. Why? The 6 Stars encircling Orion, or Israel are indicative of the 6 Major Muslim Menace that will, at some point in time, during the Summer of 2022 attack Israel. And what would these 6 Muslim ‘Stars’ encircling ‘Orion’ or Israel be?

6. The Orion Circle is about an ‘Encirclement’. As noted already, the Circle of Stars surrounding Orion has a Biblical Interpretation. It is based on the work of E.W. Bullinger. The Star Capella, is in the Constellation of Auriga, the Shepherd. He is Pierced at the Heel by the Horn of Taurus. He is holding Lambs as that is the Motif for what Jesus did for the Flock as the Good Shepherd. Jesus Died on the Cross of Calvary, being Pierced through by the Enemy, Taurus. It was emblematic of the Red Star, Aldebaran, representing Lucifer and the Law. Jesus as Orion confronted Taurus to rescue and Redeem the Pleiades or the 7 Churches of Asia, etc. One calls this the Great Celestial Bull Fight’. Then there is the Star Sirius, the Dog Star along with Procyon, considered the Syrian Sign and ending with Pollux in the Couple. In the most ancient renditions, the Constellation of Gemini was that of a Man and a Woman.

7. The Orion Circle, at this point in Time in History, concerning Israel as the ‘Orion’ that is Encircles could very well represent the Tension, Geo-Politically of how Israel is surrounded. And Israel does confront, presently, in its History an Existential Threat. And that is? It is coming from the Threat of Nuclear Annihilation at the Hands and Effort of a Shi’ite Muslim End Times believing Mullah Regime. It is no accident that the Israeli Defense Force, the IDF took about a Month to Drill for an Encirclement Invasion, on all Fronts. This included, for the 1st Time in Modern Israel’s History, a coordinated Military Drill that included the Army, Air Force, Navy and Intelligence Agencies, all focused on coming Muslim War, all bordering Israel, perhaps this Summer.

Thus, to summarize, the Orion Circle, Astronomical depicting Orion at the Silver Gate as the Torch Bearer, encircled by the 6 Stars, can be seen as Israel. And that precisely when the Sun is entering the Silver Gate, that demarcates the beginning of the 3 Month Summer Season is when perhaps, Israel, as the Great Orion will have the Encircling Stars as Enemies, that being the Bordering Muslim Military Factions come and Attack Israel, all at once. This could be the Geo-Political Scenario as the justification of such an Encirclement Attack by the Para-Military Muslim Factions would be because Israel attacks the various Iranian Nuclear Facilities.

This would be a Game Changer as Israel has destroyed 2 Prior Nuclear Reactors in Iraq and Syria. The major difference now is that Iran has multiple Reactor Sites and a lot of them are in Deep Underground Facilities. However, what is different now and what will be to Israel’s Advantage are those Israeli modified F-35s that do not need any Intermittent Refueling. As the F-35’s are Stealth, it will be a Surprise Attack that Iran will not see it coming. But Iran is prepared for an Attack, as much as Israel has been and so have all of Iran-Armed Sunni and Shi’ite Para Military Factions that are armed to the Teeth, as they say. Will the Orion Torch that is Astronomically ‘Lit’ by the Sun on June 20-21 be a Euphemism that it will be from that Time forward, within the 3 Months of Summer that the ‘Fuse will be Lit’ on this War? Most likely.
__________________________