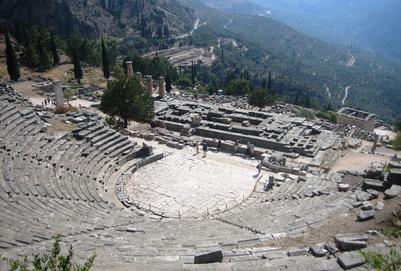 #270:
ORACLE OF DELPHI
ANGLE OF THE COMING ABYSS
And Pythia, the Goddess of Prophecy

‘They had tails with stingers like scorpions, which had the power to injure people for 5 months. (3600 hours) They were ruled by a king, the Angel of the Abyss. His name in Hebrew is Abaddon, and in Greek it is Apollyon.’ –Revelation 9:10-11

The purpose of this study is to ascertain the sacred ley-lines of the ancient city of Delphi in Greece. In the continued quest to use Astro-Archeology as a tool to discover such ley-lines, Delphi will prove that such ancient sites and those around the world had a common and single source of knowledge and template. This template appears to keep recurring in such ancient sites, that of Orion and the Pleaides. Although highly suggestive, Delphi will be shown that such a geometry exists to corroborate this theory. Another reason to study this place is because it is a fascinating place where supposedly Apollo, the Son of Zeus killed the Python or ‘Dragon’. This ancient mythology has prophetic overtones as it mirrors the eternal struggle between the Christ, which of the ‘Son of GOD’ and the ‘Python’ of old, the Devil as identified in the book of Revelation.

Furthermore, it is interesting to note that Apollo was the ‘God of Prophecy’ as Jesus Christ is said to be likewise in the book of Revelation 19:10; that all prophecy is about Jesus, the Christ, etc. Why this study may also be relevant in these Last Days is also that the Bible teachers that just before Jesus’ returns, this ‘Apollo’, Angle of the Abyss or ‘Bottomless Pit’ will be loosed on Earth to raise havoc as part of the Seal Judgments of the Lamb of YHVH. Lastly the portion the book of Acts will examine the incident where Paul on his 2nd Journey through Asia Minor along with Silas encountered a slave girl with this similar Pythian Spirit of Apollo. Based on research, it is believed that the place of Delphi dates back to around 1400 BC. This place that contained the Temple of Apollo was where the world famous Oracle of Delphi was. At the entrance of the Temple of Apollo was inscribed the famous axioms, ‘Know Thyself’.

This temple was the most important shrine in all Greece at the time as the cadre of virgins were employed to utter the ‘prophecies’ of Apollo. This is the first ever case where a ‘god’ or more likely a Fallen Angel spoke through as a Woman. Also according to Greek mythology, it was said that Zeus wanted to measure the known Universe and set out with 2 eagles on either side and they met at Delphi. Thus, Delphi was considered to be the Omphalos or the center and literal ‘navel’ of the world. People came from all over Greece and the known world to have their questions about the future answered by the Pythia, the Priestess of Apollo. This to an extent, it also echoes what occurred in the Garden of Eden in how Eve is associated with a ‘Serpent’. It whispered to her and she, in this case misinterpreted the message based on Lucifer’s deception.

It has been recorded that the Pythia would sit atop an elevated tripod over a crevice in the ground to the side of the inner chamber or ‘Holy of Holies’ where she would be induced in a trace due to the gases that came up. She spoke in voices and different languages or in ‘Tongues’. This is plainly divination and what YHVH in the Bible forbid as coming from evil Familiar Spirits. These are demons that seek to embody objects and people as a prize. It is stipulated that these Demons are the disembodied spirits of the prodigy between the ‘Gods’, those Fallen Angels and human women that were destroyed in Noah’s Flood. Based on some accounts, it was said that the answers of the Pythia were usually cryptic and ambiguous. A famous example of this discrepancy relates to the famous incident before the Battle of Salamis when the Pythia first predicted doom and later predicted that a 'wooden wall' would save the Greeks in battle.

The interpreted by the Athenians to mean their ships won the war against the Persians. Delphi became a very rich and prosperous city and region and the city-stats of Greece in particular would send treasures to Apollo at Delphi. For this purpose, Treasuries were built, 7 main ones that this study will correlate as corresponding to the 7 Stars of the Pleaides. It was not until the Christian era and the work and effect of the Apostle Paul that the Oracle came to disuse and disrepute. A local village sprang up on top of the lost Oracle and its temples. It was not until the start of the 20th century that it was rediscovered. The whole town had to be relocated and the remains of Delphi is what can be seen and visited to this day. In terms of its topography and association to the Orion-Pleaides layout, the ley-lines and aspect of Astro-Archeology is possible with such modern software as GoogleEarth and Stellarium.

Although Astro-Archeology is not an accepted form of ‘science’ it is scholarship nonetheless and a whole new area of unexplored possibilities. It is a new field that hopefully one day will be recognized for its contributions to helping unlock the secrets of such stones as with the Oracle at Delphi. From a top view using GoogleEarth, the tapestry will involve the core temple area of Delphi. With this perspective, the following observations are presented. The entire site appears to incorporate the 3 main Stars of Orion’s Belt. The layout of Delphi is situated in a very steep slope of a hill and has a serpentine walkway called the Sacred Way, very appropriate for the theme given the ‘Prophecy of the Python’, etc. The point at the main entrance to the Temple of Apollo appears to correspond to the Great Pyramids of Kufu and the Orion Star of Alnitak.

It is a dual layer of sacred geometry and astro-alignments working together although the angle of the 3 Orion Stars appear to be reversed. The area where the Halos was about halfway up the terrace appears to correspond to the Pyramid of Khafre and the Orion Star of Alnilam. The 3rd area of Delphi that also appears to correlate to the Pyramid of Menkaure and that of the Orion Star Mintaka is the Votive area at the foot of the entrance to the whole temple complex. If one superimposes the entire outline of the constellation of Orion over the Delphi temple complex, what is notable is that the Orion Dragon or ‘Serpent Nebula’ just south of the Orion Star of Alnitak corresponds to the amphitheater. It is also rather interesting that Orion is depicted in some cases as shooting an arrow with archery, just as there are some renditions of Apollo being likewise an archer.

Another interesting correlation is that as the Galactic Equator runs through the Orion Belt Stars, so does an apparent earthquake line or fault that runs north to south. The next astronomical association has to do with the Treasuries that line up the Sacred Way leading up to the Temple of Apollo. Starting from the Votive spot, it would appear that the approximate outline of the Pleiades Star cluster matches the 7 main Treasuries of Delphi. It is also understood that in every local that such studies seeks to correlate the astro-alignments, not all will be a perfect match as they appear in the sky. One has to also account for the topography of the place but thus far, it has been amazing how despite how areas are uniquely different from one another, the geometry is the same. The other observation that hast unique Biblical overtones has to do with the layout of the Temple of Apollo itself.

What is rather remarkable is that the floor plane is identical to that of the House of YHVH on the Temple Mount in Jerusalem. The Temple design given by YHVH first to Moses at Mt. Sinai in Arabia and then with King David and Solomon had a very simplistic design. There were 2 columns in the Portico, then the main chamber called the Holies and then the inner chamber called the Holy of Holies. This was also in phi ratio mathematical proportions and of the most simplistic geometry and sophistication. This is exactly the case with the Temple of Apollo. If one superimposes the spiral rendition of the phi ratio for a better visual effect, starting from the Portico to the end Portico on the opposite side, the fulcrum converges on the exact spot the Pythia would be prophesizing.

It was in the Holy of Holies that the Ark of the Covenant was places and from there the High Priest could come and as the Presence of the LORD was said to be in-between the Cherubim, a voice would spoke and answer from in-between them. This is not to correlate that YHVH could be likened to this Pythia divination but on the contrary, that the Fallen Angel named Apollyon, which is of Lucifer seeks to always mimic the protocols of the Creator right down to the minute detail to deceive Humanity with a counterfeit and alternative narrative and ‘prophecy’. This was the case in the Apostle Paul’s 2nd Missionary Journey through Turkey and Greece. As he was with Silas in Philippi, a certain slave girl prophesized about Paul and Silas that they were teaching the ‘way’.

This is of the same type of demons that are of the ‘Familiar Spirits’ that exist to this day and the Bible warns not to be involved with. In this case the deception is very subtle if one does not do a Greek word study. On the surface it would appear that the ‘spirit’ testified that Paul and Silas were ‘teaching the Truth’. However, upon further study, in the Greek she was actually saying that Paul and Silas were ‘teaching a way or truth, not The Way or The Truth implying that the Gospel message of Jesus is just relative and ‘one truth among many’, etc. Paul rebuked the spirit and caused it to leave the body of the girl for which her handlers brought charges against Paul for ruining their ‘prophecy’ or fortune-telling business. The Bible clearly teaches that in the Last Days, specifically during the Tribulation period of Daniel’s last Week of Years, that being 7 years, at around the midpoint, the Bottomless Pit or the Abyss will be opened to let loose the Titans of old, to include their ‘King’, Apollyon or Apollo no less the Fallen Angel.

According to some interpretation of the book of Enoch, such were the contingency of Angels that ‘left their 1st estate’ and comingled with humanity to their detriment and imprisonment. These Angels are aside from those of the .33 that joined in Lucifer’s original rebellion in Heaven. The Bible does teach in the Epistles that such are reserved for judgment but will be to be loosed upon the world as part of the Seal Judgments during the Tribulation. With such pinned-up angst, anger and revenge against Jesus and humans, the legion of such Fallen Angels are depicted in amazing terms and what their effect will be upon humanity; not a pretty sight.
_________________________ 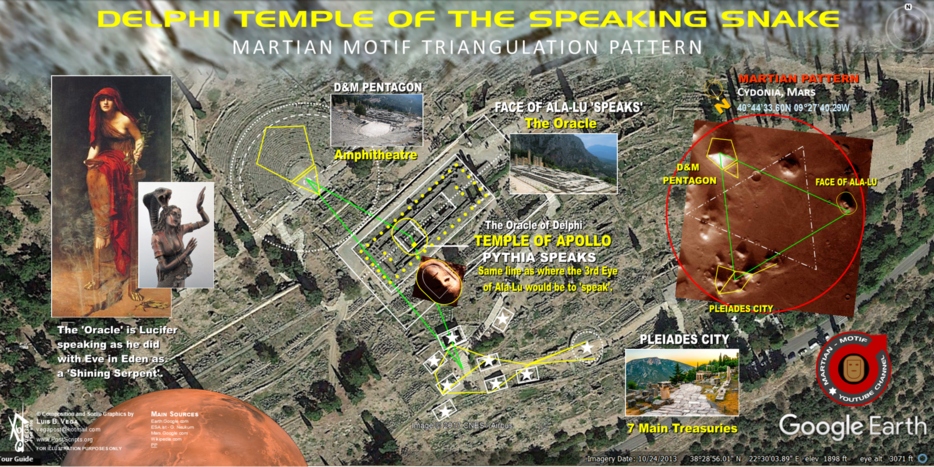