​​#675:
THE RAPTURE EXIT
RETURN OF JESUS FOR HIS BRIDE
Light at the End of the Gym Corridor

‘For the Lord [Jesus] Himself will Descend from Heaven with a Loud Command, with the Voice of an Arch-Angel, and with the Trumpet of GOD, and the Dead in Christ will be the 1st to Rise. After that, we who are Alive and Remain will be Caught-Up [Raptured] together with them in the Clouds to meet the LORD [Jesus] in the Air. And so we will always be with the Lord [Jesus]. Therefore, Encourage one another with these Words’. -1 Thessalonians 4:16-18

The purpose of this Poster is to convey a Thought of how one could Envision the Rapture Event, based on one’s Preference of how it could occur. One has communicated this Thought to one’s Online Rapture Blog Community. Such are still Waiting, Watching and Witnessing until the Rapture Call. For those that know, one goes to the Gym at the University Campus right after Work during the Regular Work Week. It has become now a Habitual Routine, which one highly recommends to keep in Good Health and Contributes to having a Sound Mind.

In fact, one’s Example has been ‘Contagious’ in the Office, where others are starting to Walk during Lunch or thereafter. So, it is a ‘Good Contagion’ to Spread Around. As the Gymnasium or Recreation Center has 2 Levels, once one is dressed and ready for the Workout, one ascends to the 2nd Level. And for the past several Week, around 6:30 PM PST, California Time, as one climbs the Stairs, and reaches the 2nd Level, the Sun, across the Hallway, is about to set. The Sunbeams appear to flicker as its Light pierces through the Trees just outside the Giant Glass Windows.

The Camera capture of the scene does no justice to how the Light looks like when it hits one’s Eye. The Colors and Radiance is just enough for one to see the Sun’s Rays as a Multicolor Kaleidoscope as the Glass obviously refracts a lot of the Sunlight. The White Light that one sees, is really only the Light or White’ Portion of the Spectrum of Light. It is a Testimony of the Triple Composition of Light, as is Water in how Sunlight or Light is but 1 Attribute of how Jesus described Himself.

Jesus stated in the Gospels that ‘I AM the Light of the World’. And that those who Walk with Him, as in having a Personal Relationship will not Walk in Darkness. Nor will such Followers and Disciples of Jesus ever be found in the ‘Outer Darkness’ where there is Weeping, and Gnashing of Teeth’, etc. The 3 main Delineations of the Light Spectrum are composed of the following.

Exit Strategy
In fact, pertaining to ‘Light’ and Darkness, these Terms are tied to the Jubilee Year. As many are suggesting that the Year 2022 is a Jubilee Year, which it is, depending on the Start Date, it is about casting Light into the Darkness as Isaiah 61 Proclaims, etc. The Jubilee Year, in 1 Aspect can be determined by the 70-Years since 1952. Why? This Year is pegged to Israel’s 1st Sabbath Count. It is based on when She returned to the Promised Land, of which the Shemitahs are predicated on.

And how since the Yom Kippur War of 1973, it would make the Year 2022, the 50th Year Anniversary and so on. Back to the Poster of the Rapture Exit. As one starts to walk down the Hall to get to the Indoor Track, the Rays of the Sun, beams down the Corridor. And? In many of the Online Blogs, one has communicated the Thought that on the Day of the Rapture, one would prefer to not be Sleeping, for example. Why not? One would or could perhaps then presume that the Rapture Event would have been a Dream or a Trip.

But that the ideal Circumstance, in one’s Preference would be if one was Walking down a Corridor, just like the one in the Picture that one is attempting to depict. Why? One surmises that one would just, at the Trumpet Call, at the Shout, with Loud Command, that one’s Next Step would then occur in the Air. The Light of the Sun coming through the Trees and the Giant Window, at the End of the Gym Corridor, would be as the Portal or Door promised to the Philadelphian Type of Disciples of Jesus.

And if one notices in the Picture, there is that ‘Exit Sign’ attached to the Roof. Such have been the many Signs Jesus has been given the Bride to alert her of the Coming Call and Command to Exit Earth. For about a good Decade, there have been Amazing Astronomical and Geo-Political Signs that the Convergence is intensifying. And with each passing High Watch Day that comes-and-goes, the Bride of Christ is seen the Exit Sign that is much clearer and nearer. 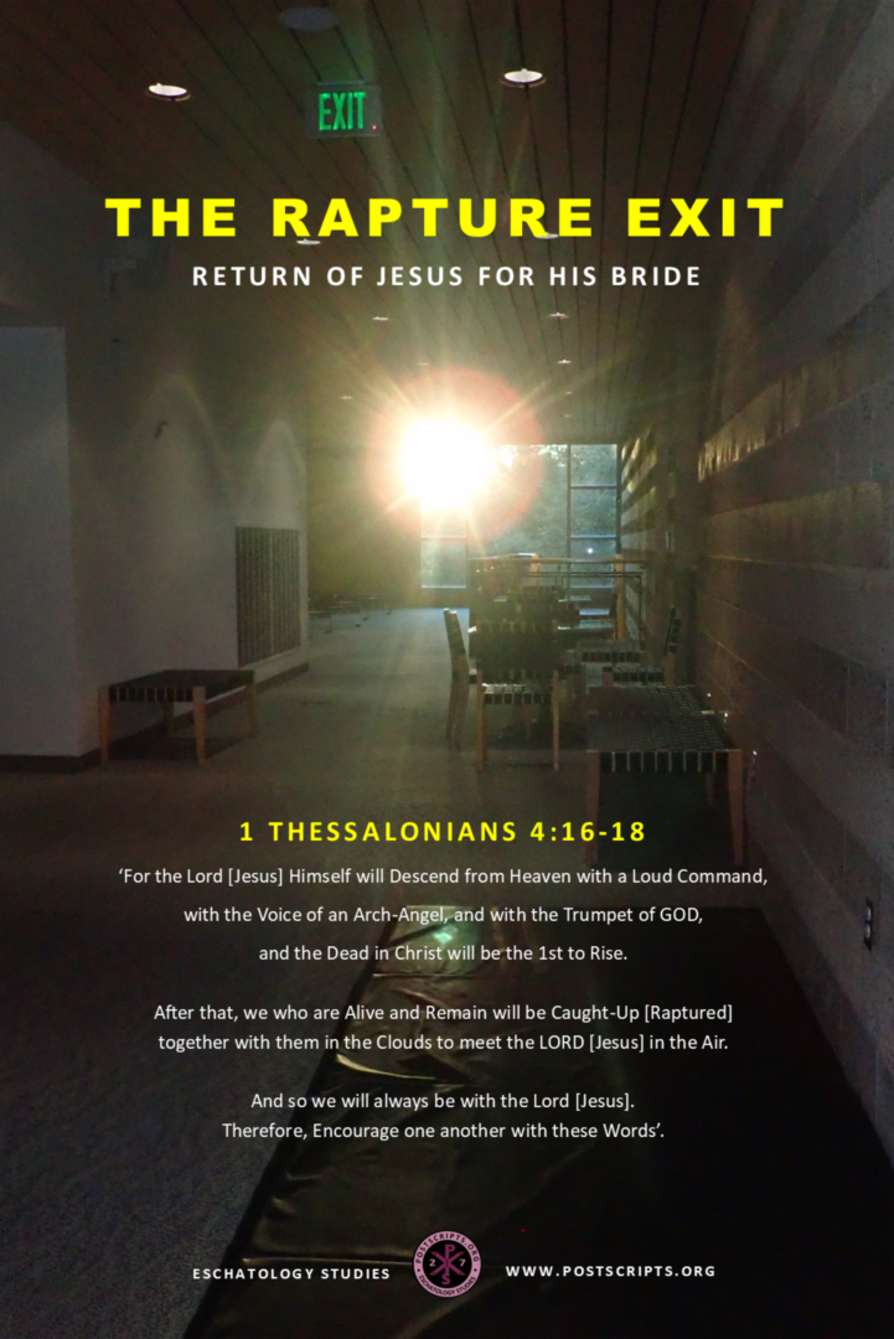