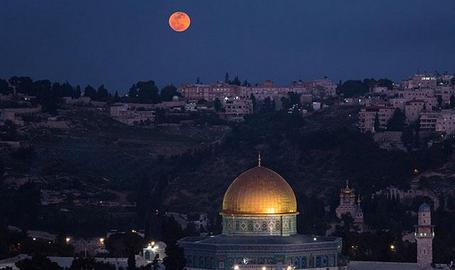 ‘70 Weeks have been decreed for Your People and your Holy City, to Finish the Transgression, to make an End of Sin, to make Atonement for Iniquity, to bring in Everlasting Righteousness, to Seal -Up Vision and Prophecy and to Anoint the Most Holy Place. So you are to know and discern that from the issuing of a Decree to Restore and Rebuild Jerusalem until Messiah the Prince there will be 7 weeks and 62 weeks; it will be built again, with Plaza and Moat, even in Times of Distress.’ –Daniel 9:24-25 with emphases

The purpose of this study is to show that the May 14, 1948 and the June 7, 1967 ‘restoration’ events where prophetic and part of a 3 component countdown that were accented by the Blood Moon Tetrads. It was before Israel’s independence in 1947 that the UN passed the resolution to partition the Promised Land and carved out a nation for the Jewish people. Many skeptics scoffed at the notion that ‘nothing’ seemed to ‘happen’ during the Blood Moon Tetrad of 2014-15. The point is that the last Tetrad of 2014-15 was part of a larger triad of Tetrads since 1949. The 3 Tetrads were in approximate phi ratio. This study suggests that the pattern of prophetic events pertinent to Israel were subject to that Tetrad in proximity of when it occurred. Why?

It is because according to the Bible, the Moon represents Israel cosmologically. The Sun represents the Nations. So, when Blood Moons which are Total Lunar Eclipse or Total Solar Eclipse occur, they speak to the prophetic associations between Israel and the Nations. The pattern is thus, Before-During-After the 4 Blood Moons. In addition, each Tetrad was subject to a restoration concerning the Covenant People of YHVH. As the case was that the Jews established a homeland just prior the Tetrad of 1949-50 they did liberate Jerusalem during the Tetrad of 1967-68. The question is that if the Tetrad Template Theory is prophetic, could the Tetrad of 2014-15 see the 3rd  Temple then be established within the last 7 year sabbatical Cycle or 25200 days after such Blood Moons? This 7-year window points to after 2021.

Consider that from the year of 1948, the Jewish People celebrated the 70th Anniversary of the 1948 Declaration of Independence, Israel saw its 70th year anniversary in 2018. If one incorporates a 1260-day or 3.5-year coefficient to it, the year would be 2021.5. Does this then signal perhaps the end of the Church Age? Consider also that regardless of when the 70th Year of Daniel’s Week of Years starts, the Rapture of the Bride of Christ has to occur prior. Perhaps this timeframe will start the completion of the 70th Week of Years concerning Daniel’s prophecy for ‘His People’. In 1948 the State of Israel was birthed, in a day. The 3rd Temple event could very well occur after Tetrad of 2014-15 within a 3.5-year span of time.

Restoration Sequences
The Nation was the last prophetic variable to be destroyed and the 1st to be restored given the sequence or ‘Keys’ as debriefed by Jesus to His Disciples in the Olivet Discourse. To reiterate, the subsequent Tetrad of 1967-68 occurred during the prophetic event of having not only the city of Jerusalem liberated from the Muslims but the Jews secured the Temple Mount. Thus, this study contends that the last and 3rd prophetic variable to be restored next is the Temple. Based on the Tetrad Pattern, the 3rd Temple would come after the 3rd Tetrad of 2014-15 within a 3.5-year window of time perhaps.

This puts the timeframe of the 3rd Temple being either restored or beginning to be restored from the timeframe of 2022 onward, it is that close. Thus, the years after 2022 could fit the pattern of the ‘after’ sequence concerning the Tetrad Template Theory of prophecy presented in this study. To be clear, the Tetrad Template Theory is that of the prophetic restorations are to occur, before, during and after the 4 Blood Moon Tetrads of 1949-50, 1967-68 and 2014-15. And that the Sabbath Cycle form 2015 t0 2021 is the 7th. This is then to suggest that the subsequent Sabbatical Cycle form 2022 to 2029 could very well be Daniel’s 70th Week of Years or the Tribulation Period, all inclusive.

To reiterate, this study suggests that since 1947, the pattern encompasses the 3 prophetic variables of the restoration sequence have to be in place before Jesus returns as they were destroyed. Other secondary but nonetheless just as important prophetic variables also have to be in place as it was in Jesus’ 1st visitation. These variables have to do with there being a Sanhedrin for example, a False Prophet, a ‘King of the Jews’ that will be the AntiChrist, the Roman Empire ruling a divided Israel, etc. The following is the Tetrad Template Theory of prophecy concerning the 3 variables of restoration pertaining to Daniel’s ‘People’.

As then, the 2-State Solution was to have the last vestiges of King David’s Tribe, that of Judah barely alive and co-existing next to the Samaritans that were hostile towards the Jews. This Tetrad Template Theory is based on the assertion that if it is the case that perhaps in the years following 2015, being the last of the 8 Tetrads since Jesus, the Temple is to be in place. Then this means that the Rapture of the Bride of Christ has to occur before and that much sooner. This is stipulated and based on the pre-Tribulation Rapture.

The 3rd Temple has to be addressed from now on until it is validated based on this suggested Tetrad Template Theory or pattern. As to Pentecost being prophetic and tied to the Rapture timing? Consider that, the June7, 1967 was Pentecost as was the Declaration of Independence by the Jewish Calendar in 1848 by some who calculate it alternatively. Thus, will a Pentecost to occur in the future also have to do with the 3rd Temple and or the Rapture of the Bride of Christ, all inclusive? Time will have to tell.
_______________________