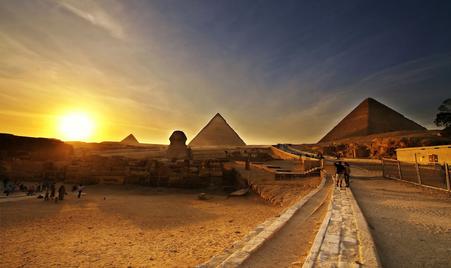 #50:
​THE GIZA PYRAMID CLOCK
MYSTERIES OF CELESTIAL TIME
The Transformation of Prophetic Ages

The purpose of this study is demonstrate how Earth ley-lines and Sacred Geometry of the Giza pyramids encompasses the patterns of the Stars to tell ‘time’, prophetic time. In some cases, there are some oversights as to what the pyramids were built for and what they could possibly mean as they are not made to be ‘tombs’ but ‘time-markers’. The prophetic supposition is based on the divine decree by YHVH, the Sun, Moon and the Stars were to be for ‘Signs and Seasons’. Such the case would be in keeping ‘time’. The builders of the pyramids at Giza were astute to this wisdom and revelation that they encoded the ‘calendar’ as it were in the literal dimensions and measurements of the pyramids. The theory of the Giza Pyramid Clock is one of the many mysteries of hidden knowledge that the Pyramids have. The Pyramid Clock theory and literary work was first published by a Dutch scientist named, Dr. Johan Oldenkamp.

Some mathematical crunching will also be presented to show just how precise and amazing the math is concerning the design of the 3 pyramids of Giza and the year that this ‘clock’ is pointing to 2022-23. It will be suggested, as other researching this phenomenon have stated, that the feet and/or inches of the pyramids perhaps do correlate to ‘years’ of time when pyramid angles and measurements are extrapolated as ‘time’ can be measured and it has an ‘end’ as a ‘beginning’. Given this possible number-to-year association of the 3 pyramid alignment, thus it could be deduced that certain dates or numbers do reoccur; primarily, 2012 and 2016 and then 2022 based on a recurring sequence of 7 years. Oldenkamp calculated that based on the positioning of the Sphinx-to-constellation association, the last time there was a synchronizing of the 2 was approximately 10,500 years ago. The question then needs to be asked, were the pyramid and Sphinx built then? This would mean that the 6000-year Biblical chronology of Genesis is either off or it involves an Age in which humans did not yet exist perhaps.

The Giza Pyramid Clock is thus theorized to be conveying that a ‘New Time’ or ‘Age’ to begin is due based on Olden Kamp’s calculations. According to his calculations, this transition started in 2012. Perhaps the designers of the Giza pyramids encoded these dates because they are or will be extremely significant. As to the significance of these numbers or years, some speculate that it is when the Age of Aquarius is to commence or to others, it will be the dawn of the Luciferian New World order. Yet to other, it is the return of Jesus Christ. The Bible does state that an ‘Age’ is coming called the Millennial Kingdom. This will be though when Jesus Christ physically is foretold to return as He promised to His Followers. Many are anticipating the New World or Age Leader will begin to take charge. Others speculate that the AntiChrist will come out of a financial collapse of the world economies, and political chaos, etc. It will remain to be seen.

The Pyramid Time Clock
These notable events would be tied to the astrological occurrence and what would be happening in relation to Israel and the coming New World Order. According to Oldenkamp, there is a sequential 7 year pattern that is tied to the procession of the ‘Clock’. This would corroborate how some would say that the Creation Calendar is based on a set sequence of the number 7. How this is tied to the pyramids of Giza and the Time Clock is based on the mathematics of the Great Pyramid in particular and the layout that is set to the Stars of Orion’s ‘Belt’, astronomically. In essence, the constellation of Orion takes on that of the ‘Chronicler’, of Kronos, the Time Keeper. The Giza Time Clock is thus set to the coefficient based on 7 days in a week of Creation and 7 years to a Sabbatical Cycle, etc. The following is a suggested countdown.

It has been well researched that the Giza Pyramid complex holds numerous and wonderful mysteries that have been solved and some yet to be solved. One particular phenomenon is the Giza Clock that is said to coincide with the day when the changes of ‘Ages’ occur. Some attribute such changes in the ‘Ages’ as pertaining to the ‘House’ or astrological Sign the Sun is at that given time. The Giza Clock is also based on certain Stars and the alignment of planets in certain cases. Given the planetary alignments, it would be Saturn, as ‘Kronos’ that would mark the end of the ‘old time’ to be replaced by commencing of a new one, and thus tracking the movement of Saturn in relation to the Great Pyramid could be the key in terming more precise year perhaps.

The Giza Clock basically stipulates that the within the framework of the design of the Giza Pyramid complex, a mathematical code was factored in the design that ‘clocks’ the Procession of the Equinoxes. Among other spectacular sacred knowledge, the Pyramids are aligned to the ancient 4 cardinal Stars. The Stars are Antares, Regulus, Aldebaran, and Fomalhault.  These correspond to the Zodiac of the Eagle, Lion, Bull, Man that are depicted in the Bible as the 4 Living Creatures and the symbols of the standards for Israel’s 12 ancient Tribes. The meaning can also be applied to the 4 Gospels found in the Bible that attribute the dispositions of Jesus’ ministry on Earth. They are the aspects of Jesus being a Servant, Prophet, Priest and God-King, etc.

Why the Giza Clock is considered is that many assert that it holds the key to when certain ‘prophetic’ dates occur and were pegged to the Sun, Moon and the Stars in direct relationship to the pyramids at Giza. Such events pertained in the past to the Flood of Noah, the birth of Christ, the Temples being constructed in Jerusalem and the return of Jesus Christ for example that this study suggests could also be the case. The Giza Clock in the illustration presented mirrors the coordinates from a cosmic perspective, not an Earth perspective, thus it will be reversed. As mentioned, the Sphinx’s position marks the delineation of the beginning and end of ‘time’ as with Virgo and Leo being the beginning and the end of the Signs in the Heavens, etc. The ability to know how to ‘read’ ‘pyramid time’ is a key in unlocking the ‘secrets’ of the Universe.

The Altars of YHVH
Here is another profound and amazing mathematical correlation as the pyramids of Giza have a direct relationship to the Temple Mount in Jerusalem. The Temple Mount is where the House of YHVH stood and will according to how some interpret End Times prophecy. The math is ‘scramming’, as it were the year 2016 or 5776. If one takes the same degree of angle that corresponds with the Giza Pyramids to the Orion Belt Stars and then one factors that angle to the edges of the Giza pyramid complex, one will come up with a very peculiar mathematical result that corroborate the 7-year cycles.

If this notion is projected onto the Temple Mount in Jerusalem as a focal point, then the feet and inches can possibly compute the following years. Thus, this study suggests that perhaps the mathematics conveyed by the Giza pyramid alignments have to do when the ‘Osiris’ is to ‘resurrect’ or come on the scene, as it were in one aspect or as mentioned, when a ‘resurrection’ is to occur as in the resurrection and rapture of the Followers of the true type of Orion and keeper of ‘time’, Jesus.

The Pyramid Clock suggests when the ‘New Astrologically Order’ begins; a new ‘time’ perhaps to begin that will be pegged to a certain ‘House’ or Sign of the Zodiac like Orion or Ophiuchus. These ‘Ages’ are also contingent on when, astronomically the Gates of Heaven are opened. It is understood that 1 is located in Orion called the Silver Gate. The Golden Gate is in Ophiuchus in the opposite side of the Universe on the Ecliptic. Of interest, the pyramids of Giza along with the Sphinx, produces a ‘cross’ alignment as a cosmic motif of a ‘key’ of sorts. The point is that with certain celestial alignment occur is when the ‘portals’ of Heaven are opened for such a resurrection and rapture to occur.

One thing is for sure, the time for the Church Age to end is fast coming to a close, perhaps based on this prophetic pattern of a prophetic 7-year countdown since 5776. Nonetheless, the mystery of the Great Pyramid in Egypt boggles the mind. It is full of countless mathematical precision calculations. Many over the centuries have studied the Giza Pyramid complex and do concur that certain dates and times are etched into the very granite blocks of the structure.

Mathematically what is recurring, according to many researchers is the concept that such structures were chambers of ‘resurrection’. In the same light of mythos according to the Ancients, it involves the return of Orion, of Osiris, the actual ‘time-keepers’ of the Universe. Or perhaps it is signaling when the resurrection and rapture of the Bride of Christ will occur? Although the pyramids at Giza were not tombs as no bodies were found, the question remains, what were and are their function? This study as others suggest, keeping time, ‘prophetic time’. Following is just an example of the complexity of the mathematics that was infused into the design of the Pyramids.

To reiterate, what is rather interesting with respect to the ‘Year of Light’ or that of Lucifer is that if one applies the 7-year time intervals, the next numerical sequence that would equal to a year would be 2022. The number is also further a factor of 2520, which is how long the Tribulation Period is to last –per some interpretations of Daniel’s last Week of Weeks. Is the Pyramid telling that perhaps 2022-23 will be the commencing of the Prophetic Week of a 2520 day count, according to the Prophet Daniel? It will remain to be seen.
______________________