#295:
666 DOW JONES
NUMBERS OF ENCRYPTED SIGNALS
Echoes of the Coming Mark of the Beast System

‘And the 2nd Beast required all people small and great, rich and poor, free and slave, to receive a Mark on their right hand or on their forehead, so that no one could buy or sell unless he had the Mark — the Name of the Beast or the Number of its Name. Here is a call for wisdom: Let the one who has insight calculate the Number of the Beast, for it is the Number of a man, and that Number is 666.’ Revelation 17:16-18

On February 2, 2018, the Dow Jones plummeted to a very unique number that in the Bible has end-times significance. The market plunge was set at -665.75 or basically 666 if one would round it off. Many have studied the Stock Market and believe that there are certain encrypted patterns of numbers that the Luciferians use at times to signal their ‘chest move’, metaphorically. Others would and do scoff at the notion that certain numbers have any relevance to particular meaning, much less prophetic ones.

However, there is a whole genre of thought and practice which does just that, ascribe values to numbers. In fact, the Bible does so very well. Each number has a value and a meaning associated to it and that lends to prophecy, no less. What this market ‘plunge’ will signify remains to be seen but it is very intriguing on what day it occurred. The day of February 2nd happened to be the 33rd day of the year and with 332 day remaining.

Those that study the occult will automatically recognize this as a sure encrypted ‘signature’ of the ‘Invisible Hand’, etc. The ‘signature’ is replete with the evil Masonic Order, among others of their similar kind. The Bible identifies that one day, such a numerical value of 666 will exist and be ascribed to the coming world ruler that will use such world markets to control and implement their Luciferian New World Order, etc.

Although, many would care to say that it sound as a ‘conspiracy theory’, it is in the Bible and this prophecy is coming from the testimony of Jesus giving the revelation to the Apostle John, etc. The Bible ascribes this particular number 666 with the world markets that will dictate who can buy and sell. It will basically be the economic-medical grid in which the world will be ‘plugged into’, a ‘Matrix’ if you will. As the days, weeks and years fast approach this coming prophetic period, it is just interesting to note how certain days and numerical factors such as a Dow Jones market plunge sets at such a 666 number.

Mind you, the activities of the Dow Jones trading in such related and intertwined global markets with massive trading and volume is done by computers with millions of transactions processed in seconds. The point is that this is no mere coincidence. It is a ‘signal’ and time marker of a milestone that has been reached for those building up the grid and foundation for such a coming world market that will be the foundation of the eventual last Luciferian World Order. It will be the days foretold that only those willing to take the ‘Mark’ will be able to live, work and eat. It basically will be a ‘death sentence’ to those that will refuse the ‘Mark of the Beast’. The gravity of such a ‘Mark’ is that the Bible warns emphatically that those who take the Mark of the Beast whose number is 666 will be dammed to Hell forever. This is serious. Why such a severe penalty?

There is much speculation but with the fast development of science, biology and artificial intelligence, AI, that are crossing boundaries, many believe that in some way, the taking of the ‘Mark’ will render a human, non-human. Such therefore will not be able to be redeemed by the blood of Jesus Christ, who specifically incarnated to become the Last Adam, a human to pay for sin to redeem the human race. The Bible teaches that Jesus came to die for humans, not Fallen Angels or other unknown beings, etc. If in some way, taking the Mark perhaps will change the genetic code at the DNA level of a human being. It might well be the case that the 666 Mark will surely make one then unable to be saved by Jesus’ blood and as a result be condemned to Hell, etc.

The next anomaly of this occurrence has to do with the fact that there is a double ‘666’ or 2nd ‘witness’ to this prophetic coefficient. According market analysts, this -666 market drop of the Dow Jones has been the worst since June 6, 2016. What is ‘prophetic’ or significant is the date. It is 6-6-16 or another encrypted 666, which happens to be 606 days apart. There is an alleged secret knowledge called the Market Crash Cycles that have been attributed to manipulation of the markets using a mathematical formula to predict such economic cycles as done by the Rothschild’s, for example. According to studies by Og Mandino, Steve Pitts, and Ralph N. Elliott, most New York money market investors use the understanding of numbers and timing to predict market repeating cycles that are based on solar and lunar eclipse calculations. Thus, this latest 666 plunge was expected right after the Super Blue Blood Moon, within a 2-day timeframe, which is another prophetic factor in play, etc.

What is also very amazing, if one does not read too much into this particular occurrence is that furthermore, the market volume reached 25,250 points (2520). This in itself is also echoing the factor of 2 divisions, that of 1260. These Biblical and prophetic number coefficients, by the way have to do with that actual time lapse of how many interpret how long the Tribulation Period will be and when the Mark of the Beast system and 666 number will be implemented. Many believe it is to be at the midpoint or the start of the 2nd half of 1260 days or a 42 month period, etc. Amazingly, this end time, according to the Bible will coincide with also the countdown to the literal return of Jesus Christ. 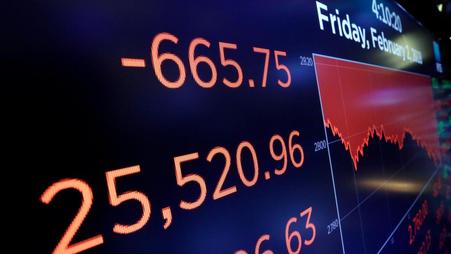