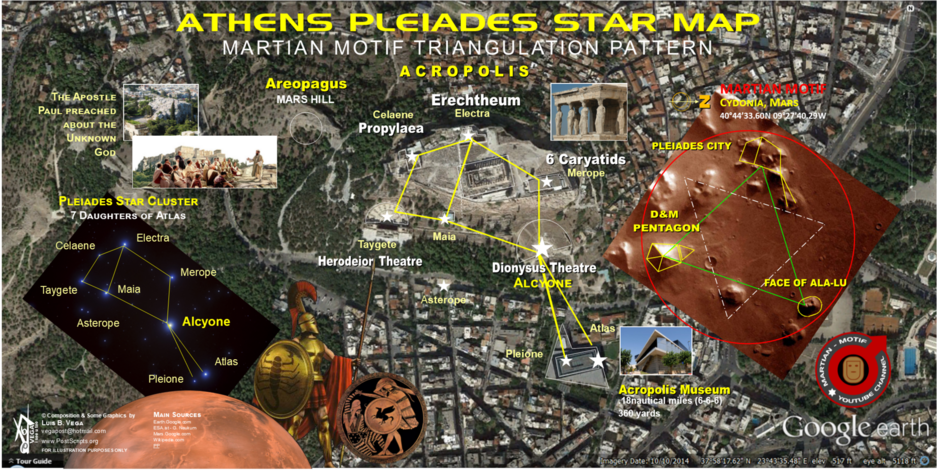 #180:
​PARTHENON PLEIADES
OLYMPIAN MARTIAN MOTIF
A Study of the Encrypted Layout of the Acropolis

The purpose of this study is to suggest that the core area of the Acropolis in Athens, Greek is construed to mirror the Cydonia, Mars Pleiades Pyramid motif from a top view. Both configurations are nearly a match when viewed facing north. The Athens version has a few minor adjustments due to the topography but the entire angle of the hexagram motif is only off by 3.33 degrees. This is the coefficient the heading is at on the Cydonia, Mars from the Pentagon Pyramid fortress. This Mars connotation even has a Biblical link with the Apostle Paul and a direct inference to Mars as he preached on Mars Hill. Evidently the ‘Builder’s and designers of the ancient city layout were in the know of the specific ley-lines, degrees and angels of the Cydonia, Mars motif.

The replication on the Acropolis core complex is amazing and details of such precise angles as with those structures on Mars can now be approximated based on modern satellite imagery. As noted in other studies pertaining to the world capitals that encrypt such a similar Martian motif, the Face of Mars or that of the demigod Ala-lu corresponds to the Panathinaikos Olympic Stadium. The Pentagon Pyramid corresponds to the area of Athens that has the street grid in an exact angle orientation. In fact, this same pentagon grid reaches its apex at the Temple of the Olympian God, Zeus. Amazingly the degree heading is at approximately 9.11 degrees north. The most amazing and striking aspect about this Martian motif in Athens has to do with the Acropolis. This is in essence a ‘pyramid’ complex dedicated to the pattern of the Pleaides. The only adjustment is that the pattern is rotated south by approximately 90 degrees.

When the Pleiades template is superimposed onto the Acropolis, the match is nearly perfect, down to the very angles of the structures as they are on Mars. Who transmitted this marvel and knowledge of how the structures on Mars were construed and how many there were? The overall arching questions that this and other studies on the same phenomena is why and what for? One possible explanation is that such places on Earth are chosen because they synchronize with energy points on Earth and are vortex grids; in essence such can perhaps function as portals or gates. The hexagram motif would make sense as in this case as with the occult, such are used as a geometric configuration that basically functions as a ‘key’ to unlock such ‘Stargates’. Perhaps those beings that constructed the Pleiades Pyramid City motif on Mars are such that travers such inter-dimensional portals to and from Earth, suggesting demonic and Fallen Angels of the sort.

Also as in most other major Cydonia, Mars depictions around in other world capitals, there is a ‘Serpent’ motif as well interwoven in the hexagram. The point being is that such an encrypted celestial motif idolizing and glorifying the ‘Serpent’, the old Dragon that the Bible calls Lucifer is not of YHVH. Perhaps it is from the Pleiades where such Fallen Angels from Genesis 6 came from and seek to have their ‘signature’ imprinted, literally in the world major capitals they control. As it is there demonic Fallen Angels assigned to nation and cities as seen in such books of the Bible as Daniel. The following are some approximate measurements taken from GoogleEarth coordinates.

From the Parthenon of the Acropolis to the center point of the Panathinaikos Stadium
= .72 nautical miles ( a factor of Precessional Time)

From the Pentagon Pyramid to the Panathinaikos Stadium
= .33 arcseconds

This study also suggests that the entire Acropolis of Athens in Greece is laid out in the Pleiades star cluster pattern. Specifically, the Pleiades motif when superimposed atop the Acropolis matches exactly as it is laid out in Cydonia, Mars. The Acropolis was the center of Ancient Greece that was one of the world empires that ruled the known world under Alexander the Great. He was depicted in the Bible as the He-Goat that over-powered the Persian Empire. Greece was the 3rd ‘Beast’ Empire of Nebuchadnezzar's dream that the prophet Daniel interpreted. The Acropolis served as the religious and judicial heart of Greece. Athena was the patroness goddess that the city is named after. What is amazing is that the structures on Mars, that can now only in modern times be made out in terms of size, degrees and angles matches the same degree, angles as laid-out on the Acropolis. The following are some estimated key measurements from GoogleEarth coordinates.

From Parthenon to entrance of Acropolis Museum
.33 km

Starting with the star Atlas of the Pleiades, the star corresponds to the Acropolis Museum. This modern museum fuses the ancient with the modern but the street angles match the triangular layout of the Martian fortress, as is the museum. The next correlation comes with the star Alcyone, the most prominent star in the cluster. This is reflected by the enormous Theatre named after Dionysus. This was said to be half human and Angel in terms of the Olympians that were said to exist. His alternative name is Bacchus, the god of ecstasy or perversion as in alternative sexual orientations. The lesser theatre correlates to the star Taygete and is called the Herodeion after Herodes who was a ruling magistrate of the city in the 1st century.

The Propylaea is corresponding to the star Celaena and the Erechtheum on the north side of the Acropolis is corresponding to the star Electra. The 6th star in the core of the Pleiades, excluding Atlas is that of Merope. This star corresponds amazingly to the 6 woman Caryatids statues that hold up the temple. This obviously has a direct connotation to the Maidens of the Pleiades. At the very center of the Acropolis is the world famous Parthenon. This is where the giant statue of Athena was situated. A replica of this temple of Artemis, Diana, Astarte, Semiramis, the Queen of Heaven can be found in Knoxville, Tennessee in the USA. This motif is a ‘signature’ of the occult and the Luciferians that they have successfully usurped the iconography of such splendid stars as are the Pleiades that even YHVH in the Bible mentions them on more than one occasion.

To the Luciferians, such a Martian motif represent the image and likeness of Lucifer. He is the ‘Serpent’ of old weaving through the hexagram, the Dragon that is a total counterfeit that has captured the ‘Pleiades’. This is in as much as the metaphor of the Pleiades played-out in the capture of Eve in the Garden of Eden by the beguiling ‘Serpent’, Lucifer. The Pleiadian motif of what YHVH originally created and seeks to reclaim and restore through the work of Jesus Christ. It was for this reason that GOD the Holy Spirit sent Paul to Athens, to this precise hill of the Martian ‘gods’ to preach to the people about the ‘Unknown God’. The Apostle Paul climbed Mars Hill at the west end of the Pleiadian Acropolis. Paul preached about a risen King, Jesus as the Groom that is preparing the Maidens as a Church, to extract and call a pure Bride from. With some license Paul is here in front of the Menorah lampstand in the imagery of Jesus in the book of Revelation.

And as with the preaching of the Gospel of Jesus Christ, as it was even at Calvary, there are those that will reject the message and those that will accept it. In part this message given to the very stronghold of the Martian ‘gods’ in Athens is that their Shining Serpent was defeated, is being defeated and will be. Even then with the Apostle Paul, there was severe opposition as the Philosophers and Stoics argued with him. According to the Bible, the Church is depicted as the Bride of Christ as a Menorah lampstand in front of the very Throne of YHVH. The crowd that head Paul preached and accepted his message are as if those that will comprise the 7 star Pleiades ’Bride’ someday.
______________________________