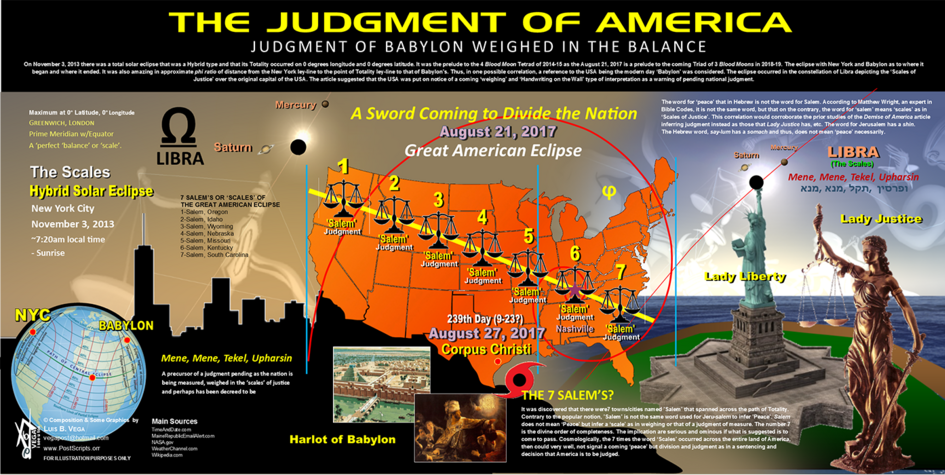 #121:
​7 SALEM'S  ACROSS AMERICA
A HOUSE DIVIDED WILL FALL
Judgment begins in the House of YHVH

by Luis B. Vega
for PostScripts News (PSN) | www.PostScripts.org
vegapost@hotmail.com

‘But if you suffer as a Christian, do not be ashamed, but glorify GOD that you bear this Name. For it is time for judgment to begin with the Family of GOD; and if it begins with us, what will the outcome be for those who disobey the Gospel of GOD? And, if it is hard for the Righteous to be saved, what will become of the Ungodly and the Sinner?’ -1 Peter 4:16-18

On November 3, 2013 there was a total solar eclipse that was a Hybrid type and that its Totality occurred on 0 degrees longitude and 0 degrees latitude. It was the prelude to the 4 Blood Moon Tetrad of 2014-15 as the August 21, 2017 is a prelude to the coming Triad of 3 Blood Moons in 2018-19. An article entitled The Demise of America was posted http://www.fivedoves.com/letters/nov2013/luisv114.htm that linked the occurrence of the eclipse with New York and Babylon as to where it began and where it ended. It was also amazing in approximate phi ratio of distance from the New York ley-line to the point of Totality ley-line to that of Babylon’s. Thus, in one possible correlation, a reference to the USA being the modern day ‘Babylon’ was considered.

The eclipse occurred in the constellation of Libra depicting the ‘Scales of Justice’ over the original capital of the USA. The article suggested that the USA was put on notice of a coming ‘weighing’ and ‘Handwriting on the Wall’ type of interpretation as a warning of pending national judgment. The eclipse occurred exactly one year before to the day when the 1776 feet tall Freedom Tower was officially finished on November 3, 2014. The Tower symbolized the resilience of the USA coming back from 9-11 but also of its pride and sins. The article went on to depict the eclipse against the horizon and how the Statue of Liberty at 9am with 11 minutes local time portrayed the outreached hand of the torch with the eclipse. In essence, it portrayed Lady Liberty holding the Scales of Justice as the eclipse reached Totality.

The Sun at that point appeared to literally ‘eclipse’ the Torch of Liberty for that of ‘Justice’ instead. Although the context was national judgment, the article focused on the spiritual condition of YHVH’s People, those that profess to be followers of Jesus Christ in these Last Days. The article suggested that the Creator was putting not only the USA on notice but in particular, that of the Body of Christ, ‘Corpus Christi’. In September of 2015, a subsequent article about the rise of Satanism across America was equated with the possible meaning of the anticipated ‘Great American Eclipse’ that was to occur in 2017. http://www.fivedoves.com/letters/sep2015/luisv96-1.htm The articles spelled-out the advent of the ‘Spirit of Egypt’ that swept the USA in particular as Baphomets, transgenderism, the alt-left, gay marriage proponents exerted their spirit and power over politics and the social consciousness of America.

The article focused on Nashville as that was the largest city by population on the path of Totality. Oddly, this city also housed the replica to the Temple of Artemis that was in Ephesus where the ‘Queen of Heaven’ was venerated; that is Isis, the ‘Spirit of Egypt’ which is of the AntiChrist. Fast-forward to the total solar eclipse of August 21, 2017. As it was acknowledged by many researchers, the anomalies of ‘coincidence’ regarding the Great American Eclipse were phenomenal. Interestingly, the day count from the November 3, 2013 eclipse to the August 21, 2017 eclipse was 1387 days or 3 years, 9 months and 18 days which is 3 and (3+3+3) and (6+6+6) days or approximately 33,000 hours. Also, many did also correlate the number 33 in many facets of the eclipse in particular. For example, from Nashville, the path of Totality took a slope of a 33 degree heading towards South Carolina.

As most have come to know, the point of the eclipse’s landfall occurred on the 33rd state of the Union, that of Oregon. The major center population was Salem and most attributed it to being a shorthand for ‘Jeru-salem’ meaning peace; it is not the case.
Furthermore, one particular person discovered that there were actually 7 Salem’s that were in the 70-mile path of Totality across the expanse through the ‘heart of the nation’. However upon further examination, although it would seem that the connotation was that of ‘peace’ and perhaps a coming peace over the land, this study suggests that it was and is the total opposite case. The word for ‘peace’ written in Hebrew is not the word for Salem. According to Matthew Wright, an expert in Bible Codes, it is not the same word, but that on the contrary, the word for ‘Salem’ means ‘scales’ as in ‘Scales of Justice’.

This correlation would corroborate the prior studies of the Demise of America article inferring judgment instead as those that Lady Justice has, etc. The word for Jerusalem has a shin. The Hebrew word, say-lum has a somach and thus, does not mean ‘peace’ necessarily. The implications are serious and ominous if what is suggested is to come to pass. Cosmologically, thus 7 times the word ‘Scales’ occurred across the entire land of America. It could very well not signal a coming peace but that of a sentencing and decision for America that it is to be judged, completely. America, it seems as a national people did not repent and perhaps, neither did the ‘Corpus Christi’ or Body of Christ in general. This study strongly suggested that America was being put on notice and on the ‘Scales’ back with the total solar eclipse of 2013 gave that much time for America to repent.

Sadly, if this divine delineation is valid, then perhaps the Creator has concluded the time of possible repentance to have been finished and has sentenced America. Perhaps now, America has become like Babylon with the ‘Handwriting on the Wall’ that it was found wanting and was to be divided amongst its enemies. That is what the eclipse did astronomically that day of the Great American Eclipse. The number 7 that were the times that the solar eclipse passed over a ‘Salem’ occurred across the land denoted a completeness. Perhaps this line of darkness denoted a total judgment on America that is coming and perhaps has begun. In the context of the several articles presented and referenced, the studies always attempt to ascertain the spiritual condition of YHVH’s People as already mentioned.

The Bible speaks that ‘judgment’ starts first in the ‘House of the LORD’, then the world. Was it any coincidence that exactly 6 days after the Great American Eclipse, on August 25, Hurricane Harvey made landfall? This day-count of time amounted to 144 hours. It occurred on the evening that Friday or the start of the Sabbath. Was it a coincidence that the point of entry that was hit by the hurricane was called Corpus Christi or the Body of Christ? According to reports, the largest metropolitan area, that of Houston, got 33% flooded. Furthermore the 27th was when the full fury of the aftermath occurred with the flooding. Although coastal Texas is no stranger to hurricanes and flooding, a record breaking rainfall of 50 inches occurred; the most in the continental USA to date. It so happened that the 27th of August was the 239th day of the year, 9-23 anyone?

In the political and social fallout, one scapegoat and object of angst and anger was centered on Joel Osteen and his ministry for apparently ‘not allowing people to use his mega-church for shelter’, etc. On one hand, the roads were inaccessible for people to get there even if they wanted to. Nonetheless, has the time begun that Jesus is drawing His attention to such ministries to either expose or deal with its issues to get the ‘Corpus Christi’ or Body of Christ ready before He unleashes His full fury on the nation for its sins as well? Is the LORD not only allowing the division of the nation to occur but that of the House of the LORD where judgment first starts? Is there a clear separation being made of what is holy and what is profane in the House of GOD? Yes. It appears that on a national level this is now occurring. Case in point is the Nashville Statement of how Evangelicals are standing on Biblical principles and against perversion, yet it seems half the supposed ‘Body of Christ’ that call themselves ‘Christians’ are opposed to it.

Is Nashville, thus a Last Day’s type of ‘Ephesus’, the Church of the LORD’s 1st love? Can the entire Body of Christ be likened thus, to that of Ephesus and be called this type of congregation? On a national level, perhaps it can be a prophetic typology in that Jesus is ‘judging’ and calling the Body of Christ in America to return to her 1st Love? The subsequent articles entitled, The Church of Christ’s 1st Love article #265 in Articles link, http://www.postscripts.org/articles-1.html is a study about the city of ancient Ephesus. It examines the ancient ley-lines and possible prophetic parallel significance that could be applicable even to today’s ‘Corpus Christi’ and Nashville connection. The study will also interject the astro-archeological layout of such a city. The city layout appears to have a template layout used by the Ancients that speaks of a hidden and sacred knowledge that the Fallen Angels had passed on to certain humans.

The study will touch upon the evangelistic impact of the Apostle Paul, the riot and the Temple of Artemis that was there as it is in Nashville in these Last Days and how it subsequently lost its ‘1st Love’ as Jesus evaluated it in the book of Revelation. It was the Gospel and men like Paul that stood for YHVH’s precepts in his day. Likewise, it did cause a division, a separation for opposing perversion as it is now occurring in America for Christianity, in Nashville where the replica of the Temple of Artemis stands. Now as then, it was the ‘Spirit of Jezebel’ that caused Jesus’ followers to engage and embrace such perversion that is so prevalent now. The question remains for the Body of Christ, whom does it love? What type of sex does it condone?

Those in the Church opposed to such stances as the Nashville Statement, for example propagate their argument under the false pretenses of being ‘politically correct’ and ‘progressive’. Perhaps the Body of Christ in America has reached a point that at a national level now, a separation is also being made and has to be made. This ‘separation’ is not being done by man but by Christ Jesus, the Head and authority of the Church of what is holy and what is profane.

As in the Days of Noah, the days of Paul in Ephesus and even now the Christians in Nashville, et al, the issue still remains the same. The question the Body of Christ has to answer is because Jesus is asking it, ‘who is holy and who is profane’? In one measure, this answer depends on what type of sex one has or desires and what type of love the Corpus Christi in the USA has for Jesus.
________________________