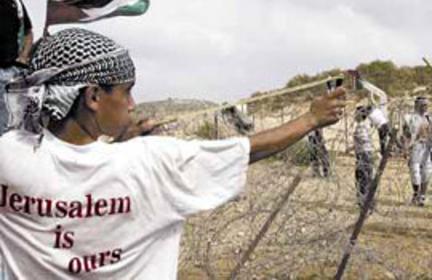 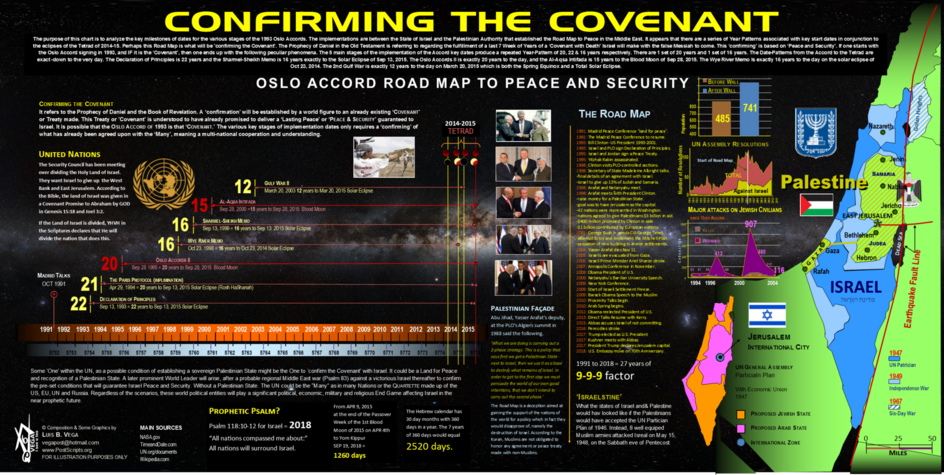 #6:
​CONFIRMING THE COVENANT
OSLO ACCORDS PATTERN OF YEARS
Dividing Israel to Accommate a State of Palestine

'And ‘he’ shall confirm the covenant with many for 1 week: and in the midst of the week he shall cause the sacrifice and the oblation to cease, and for the overspreading of abominations he shall make it desolate, even until the consummation, and that determined shall be poured upon the desolate.' -Daniel 9:27

The purpose of this study is to analyze the key milestones of dates for the various stages of the 1993 Oslo Accords implementations between the State of Israel and the Palestinian Authority that established Road Map to Peace in the Middle East. It appears that there are a series of year-patterns associated with key start-dates in conjunction to certain peculiar total Blood Moons and solar eclipses as in the make-up of the Tetrad of 2014-15 for example. This analysis is taken from a Judeo-Christian Biblical point of view in relation to the prophecy of Daniel in the Old Testament regarding the fulfillment of a last 7 Week of Years. It is a confirmation of a Covenant with Death that Israel will make with the New World Order leader and the ‘Many’. When will this ‘confirming’ of the Covenant happen? This study of the year-patterns might lend a possible clue.

Confirming the Covenant refers to the prophecy of Daniel and the book of Revelation alluding to the notion that a ‘confirmation’ will be established by a world figure to an already existing ‘Covenant’ or Treaty made. This Treaty or Covenant is understood to have already promised to deliver a ‘Lasting Peace’ or ‘Peace and Security’ to Israel. This long-sought Peace and Security will be somehow guaranteed to Israel. It is possible that the Oslo Accords of 1993 is that Covenant. The various key stages of implementation dates only require a ‘confirming’ of what has already been agreed upon. Other Biblical scholars point to the notion that perhaps the Covenant is referring to the Abrahamic Covenant or the Palestinian Land grant promised by YHVH to Abraham and his descendants in the line of Isaac and Jacob. Nonetheless, it is generally accepted that the following are the possible variables that will play out in the Last Days.

Some ‘one’ within the UN, as a possible condition of establishing a sovereign Palestinian State might be the one to ‘confirm’ the Covenant with Israel as its land might will be divided; this is 1 scenario. A prominent world leader will arise, after a probable regional Middle East war (Psalm 83) against a victorious Israel thereafter to confirm the pre-set conditions with no Palestinian State occurring; this is another scenario. The UN could be the ‘Many’ as in many nations or the Quartette made up of the US, EU, UN and Russia. The conditions after a possible World War 3 could be such that Israel will reconstruct its Temple of worship referred to as the 3rd Temple as the Daily Sacrifices are initiated. Regardless, these scenarios for Israel in the near future could be linked in some way to the timepiece of the total solar and lunar eclipses perhaps.

Tetrad Completion
The Tetrad of 2014-15, depending on one’s reference point was the 8th series of 4 consecutive total Blood Moons since Christ, As it pertains to its occurrences and frequency, its pattern in relation to the Oslo Accords key date-markers will be likened to an 8-string lyre/guitar with the various end-dates as musical notes that have been played. The Tetrad sequence occurred in-between 2 partial solar eclipses marked off exactly by a 3.5 years period. What is interesting is that the beginning of the Tetrad in 2014-15 was linked to the 2-year alignment of Mars, Earth and the Sun and was in retrograde motion in Virgo where the Tetrad started. With regards to the Covenant possibly being the Oslo Accord ‘Road Map’, there are some very interesting numerical associations derived from certain year counts that could led some validity to having it be also a ‘Prophetic Road Map’. If one starts with the Oslo Accords signing in 1993 and if it is the ‘Covenant’, then the following peculiar phenomenon occurs.

The 2nd Gulf War was exactly 12 years to the day of March 20, 2015 which was both the Spring Equinox and total solar eclipse. From April 9, 2015 which is at the end of the Passover Week of the 1st Blood Moon of 2015 on April 4th to Yom Kippur of September 19, 2018 will be exactly 1260 days or 42 months or 3.5 years. If a ‘Confirming’ happens as a result of a regional war such as the Psalm 83 scenario, then it could coincide after the end of the Blood Moons of the Tetrad in 2014-15. Depending on one’s interpretation of eschatology, such a prophetic time marker could initiate the start of the completion of Daniel’s 70th Week sometime thereafter. The following counts could be relevant then to the Covenant with Death perhaps. The Jewish year 5778 could initiate the 1st segment of the 3.5-year count for the start of the Tribulation Period. Then 42 months later from July 27, 2018 or soon thereafter the start of the Great Tribulation could occur.

This particular Blood Moon of 2018 is a Central Bull’s Eye lunar eclipse that will be seen over Jerusalem and is nearly 7 years to the Central Bull’s Eye lunar eclipse of June 2011. The Central Blood Moon of July 27, 2018 will be at the center of the Triad 3 Blood Moons that bookends the Tetrad. The Blood Moon occurs in the sign of Capricorn at the neck area. This could possibly connote the slaughter of the sacrifices that stops with the animals and starts with the Jews and all those Christians that come to the saving grace of Jesus Christ after the Rapture of the Bride of Christ. Perhaps this celestial association to the Oslo Accords is a very significant demarcation in the prophetic timetable that will lead the world to the Battle of Armageddon and the return of the King.
__________________________