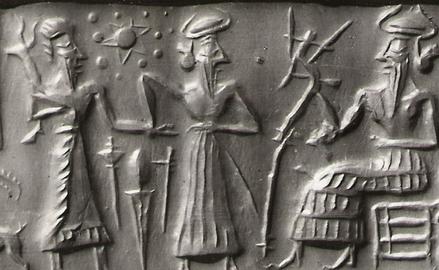 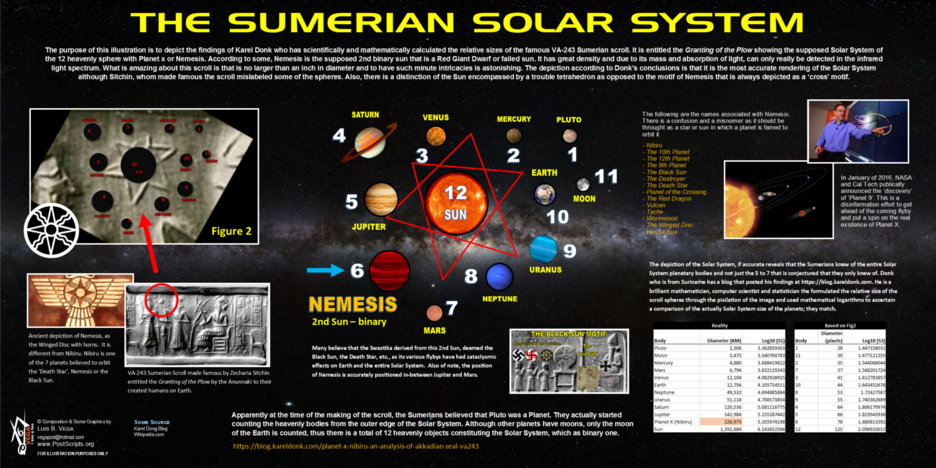 The purpose of this study is to depict the findings of Karel Donk who has scientifically and mathematically calculated the relative sizes of the famous VA-243 Sumerian scroll. It is entitled the Granting of the Plow showing the supposed Solar System composed of 12 heavenly bodied with Planet x or Nemesis. Nemesis is the supposed 2nd binary sun that is a Red Giant Dwarf or failed sun. It has great density and due to its mass and absorption of light, can only really be detected in the infrared light spectrum. What is amazing about this scroll is that is no larger than an inch in diameter and to have such minute intricacies is astonishing. The depiction according to Donk’s conclusions is that it is the most accurate rendering of the Solar System although Sitchin mislabeled some of the spheres. Also, there is a distinction of the Sun encompassed by a double tetrahedron as opposed to the motif of Nemesis that is always depicted as a ‘cross’ motif.

The cylinder seal that depicts the Granting of the Plow has been the subject of much consternation to the Darwinian Evolutionist. The seal depicts the Solar System with the planets in relative size around the Sun in which Enlil is giving a plow to humans to work the land. The seal is said to be at least 4500 years old and is housed in a Berlin museum. If accurate, no such knowledge should have been known by humans at that time. There have been many researchers and those just curious to know if such a relative size comparison does in fact represent the known planets of the Solar System. One such person is Karel Donk out of Suriname. He is a young and brilliant software engineer that has been well ahead of the current technologies in computation. Donk used mathematics to answer the questions if a comparison of the relative sizes depicted on the scroll would result in an exacting match of what the true size are of the planets.

Based on his mathematical findings, they do and thus the Sumerians had drawn them to scale. If this is the case then this is a plausible confirmation that Planet X does indeed exist as it is prominently positioned in-between Jupiter and Mars. This orbit, by the way corroborates with the many ancient accounts of such a trajectory. It is said that Nemesis or the 2nd sun is coming into the inner Solar System and according to those that study such a topic of Planet X is about to do so again in the next few years. Others attribute it to coincide with the Revelation chapter 12 Great Sign in Heaven regarding the Virgo alignments in September of 2017. The Solar System of the Sumerians had 12 heavenly bodies all together as the Sun and Moon are counted. Although the naked-eye observation of such a detail of the cylinder seal could be problematic, Donk incorporated circles to the best approximation of the edges based on photographs only.

Donk numbered them and calculated their relative size based on the pixels of each and itemized them on an Excel spreadsheet. He used 2 primary pictures and to obtain an average. He then changed the Excel order based on the size ranking of the diameters of each heavenly object. Donk then looked up the diameters of all the planets to include the Sun and the Moon and he matched the sequence by the size based on a Log10 (S1). Logarithms make it easy to scale large values into smaller values for comparison. When Donk used these coefficients of the pixilation, the planets matched the cylinder depiction of their relative sizes. With this comparison, the 2nd Sun or Nemesis as the Sumerians depicted it is projected to be about 4 times the size of Jupiter. Others contend it is not referring to the size but mass that is 4 times the mass of Earth. Based on Donks findings, he concluded that is not a mere artsy coincidence that the Sumerian Solar System had depicted in the AV-243 scroll made famous by Zecharia Sitchin.

Thus, according to Donk’s calculations, the relative sizes of the 12 heavenly bodies of the Solar System based on a logarithmic scale are equal. The depiction of the Solar System, if accurate reveals that the Sumerians knew of the entire Solar System planetary bodies and not just the 5 to 7 that is conjectured that they only knew of. Donk who is from Suriname has a blog where he posted these very intriguing findings. Donk however, based on his mathematical findings did have a correction to Sitchin’s work on this matter. Sitchin was wrong about which of the heavenly bodies corresponded to which planet. Donk believes that Nemesis or the 2nd sun is the heavenly body at the lower southwest position that is indeed between Mars and Jupiter. The ancient depiction of Nemesis has the Winged Disc with horns. It is different from Nibiru. Nibiru is one of the 7 planets believed to orbit the ‘Death Star’, Nemesis or the Black Sun. Many believe that the Swastika derived from this 2nd Sun motif, deemed the Black Sun, the Death Star, etc. Its various flybys have had cataclysmic effects on Earth and the entire Solar System.

Although other planets have moons, only the moon of the Earth is counted, thus there is a total of 12 heavenly objects constituting the Solar System, which is a binary one. The Sumerians also observed that Pluto was a planet or planetoid nonetheless to be counted as the member of the 12 total bodies that made up the Solar System.  Apparently at the time of the making of the scroll, the Sumerians believed that Pluto was a Planet. They actually started counting the heavenly bodies from the outer edge of the Solar System. It was only in the 1700s and 1900s did modern astronomers discover Neptune and Pluto for example. Donk argues that if Pluto was not the planet in mind, then at that time, there was another heavenly body of the same size in that case. What Donk also ascertains is that the Sumerians in this cylinder depiction of the Solar System did not use a linear scaling as the smaller planets would become invisible in comparison to the larger ones.

Donk argues that the Sumerians used a logarithmic scaling instead to be able to project the heavenly objects in relative sizes; a smaller factual representation of the whole. What this thesis could further touch upon is that in fact if this is the case, it also attests to the fact that the whole Universe is likewise a compositions of such fractals. Thus based on the observation of this VA 243 cylinder depiction of the known Solar System by researcher Donk, the question remains, where did this knowledge come from and who gave it to the Sumerians? Was this knowledge given to humanity before the Flood of Noah? Was this part of what Adam knew and given to him by YHVH before the Fall in the Garden of Eden? The detailed article by Karel Donk can be found in the link below.
______________________