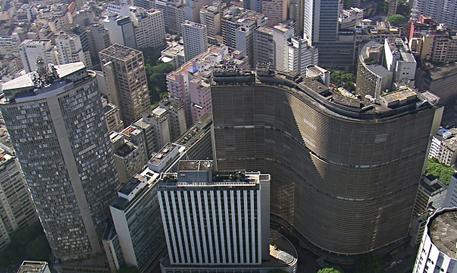 The purpose of this study is to suggest that the core layout of the city of São Paulo in Brazil is construed to the Cydonia, Mars template. There is even a New Testament connection regarding the very name of São Paulo. The official name was take from St. Paul of Corinthians. It was after all the Apostle Paul that preached in Athens on Mars Hill about the ’Unknown God’. This Mars template consists of the 7 Pyramid City, the Pentagon Pyramid and the Face of Mars that is alleged to be a mausoleum to a demigod, Ala-lu. This tri-structure motif is ingeniously encrypted in the most prominent capitals of the world. The ley-lines might vary as the orientation is either rotated, reversed or flipped. The signature marks are incorporated in either stadiums, race tracks or monuments. The 3 motifs usually will correspond to the financial center of the city which correlates to the 7 Pyramid City based on the Pleiades. There will be a combination of 7 major skyscrapers or buildings that match this Pleiades star pattern. In the case of São Paulo, this amazing and beautiful city in South America is the financial heart of the entire continent.

The Cydonia, Mars template approximates a ~90-degree rotation and is elongated. The Estadio do Palmeiras or soccer stadium has 5 prominent restrainers that hold up the entire structure. It is orientated at a 33.3-degree arc seconds that correlates to the 333-degree heading of Cydonia, Mars. The Hipodomo or horse racetrack appears to correspond to the Face of Mars mausoleum of Ala-lu. The orientation nearly is a match; the 3rd motif of the Martian template is probably that most fascinating and amazing. The 7 Pyramid Pleiadian City appears to match the orientation with the financial district in the heart of São Paulo. What is amazing is that this specific core area was constructed in the mid-1960s well before the actual dimensions, orientation and outline of the Pyramid city on Mars was ever discovered or mapped by the Mars Probe, Viking; in modern times that is. Astonishingly, the angles and proportion nearly match each other. The famous ‘S’ curved Edifiico Copan corresponds to the Pleiadian star Atlas.

The circular skyscraper next to it corresponds to Pleione. The Copan skyscraper is center of a triangle that corresponds to the same ‘Triangle Fortress’ that makes up the Pyramid City of Cydonia in Mars. As the Pleiades motif nearly stands as a ‘Menorah’ candlestick of lights, the ‘triangle’ depicts a 3-prong base. What is interesting is that this base appears to be supported or upheld by the ‘Serpent’. The ‘triangle’ base is circumvented by this ‘Serpent’ avenue’ that mirrors the ‘S’ Copan skyscraper. Incidentally or not, the ‘head’ of this ‘Serpent’ supporting the financial center Pleaides pattern corresponds to the Igreja Nossa Senhora da Consolação This is the ‘Queen of Heaven, Esther, Isis, etc., that by the way, the Esther building faces the Square of the Republic. The adjacent structure is the school of Caetano de Campos that corresponds to the Pleiadian star Alcyone. The Praça da República corresponds to the star Merope and so on. From a top view, this Pleiadian pattern matches perfectly the 7 main structures of the heart to São Paulo. It appears that those who designed such a layout are well aware of its ancient significance as ancient civilizations also incorporated this same motif in their pyramids and centers of religion, social and finance power. Obviously, it takes a lot of resources and money to ensure that this particular motif is replicated in the most powerful cities on Earth. Why?

This Cydonia, Mars template or layout must have been and perhaps is an extremely important and significant design to have the Fallen Angeles see to it that only on Mars, but on Earth the ancient and modern civilizations continue to incorporate it. Was this layout perhaps where the Fallen Angels came from in how the Bible discloses that Fallen Angels left their1st Estate and places of habitation? Did their habitation look like this motif in Cydonia, Mars? Was it in Heaven? Is Heaven itself designed in such a construct? The Cydonia, Mars and all the Earthly replications are subject to amazing symmetry, geometry, topography and mathematical relationships. In many of the ancient renditions, the layout was situated with waterways such as the capitals of Moscow, Rome, London, Paris, etc. One possible theory that links all these Cydonia, Mars Pleiades motifs is that they correspond to the Earth’s energy points and grid alignments. Thus, the reason why the motif is patterned after a hexagram is because it functions as a geometric ‘Stargate’ of sorts perhaps. The following are some the approximate measurements derived from GoogleEarth coordinates.

-From the Hipodomo racetrack to the Soccer Stadium= 18°heading (6-6-6)=3.22nautical miles.
-From Hipodomo to the Financial Center= 6.66km (Same distance in Buenos Aires with similar motifs)
-From Buenos Aires hexagram to Sao Paulo hexagram complex= 1,666km= at 45 degree angle

In many of the modern cities, such Builders use freeways or motorways to construe the ‘Serpent’ that sanctions such a template of power encrypted in the very topography and geometry of the city. The waterways contributed to the layout depicting a ’Serpent’ weaving through the hexagram that the motif construes. To the Ancients, this ‘Serpent’ was Ala-lu. He was the ’Wise Serpent’, the Nachash of the Bible, the form that Lucifer transmitted himself into to deceive the 1sthumans, Adam and Eve in Eden. This person was the personification of Prometheus that sought to ‘illuminate’ Humanity of the true light. This ‘Shining One’ thus was associated with a feathered serpent, a wise sage that was the ‘Teacher’ to mankind. He was supposedly banished and defrauded of hisso called ‘rightful thrown’. This very storyline of the Ancients is found in almost every civilization referencing the same personage. The Bible discloses this is none other than Lucifer, the Light Bearer.

3Perhaps before the Flood of Noah and the pre-Genesis re-Creation, there might have been other types of civilizations that were on the planet that essentially were habitations of Angels. As the Luciferian Angelic rebellion waged war on YHVH, the Universe, Mars and Earth can attest to the ravages of such a true ‘Star Wars’. This Cydonia pyramid complex perhaps is just one remnant of such an Angelic outpost or host planet. In the book of Enoch, it does state that Angels conspired to teach mankind forbidden knowledge and perhaps such humans were in league to carry out such a similar agenda on Earth and such a motif as the Cydonia, Mars is just their signature of blessing rom Lucifer. The Bible does declare that presently, Lucifer is the ‘god of this world.’

Thus, not only does he command the ranks of the 33% of the Fallen Angels in the Heavenly Realms above but minions of willful humans deceived in following him below. Although Lucifer has proved to be a liar, a murder, a rebel and conspirator from the start, people still believe his lie. He is not all-knowing and all-powerful. He currently, for the time being bestows power and authority to earthly people that work towards his ‘Great Work’ of usurping the earthly Zion Throne in Jerusalem. Through the 3 main facets that are replicated from the Cydonia, Mars complex Lucifer presently accomplishes this Great Work that his ‘Builder’s seek to establish his New World Order so as to usher in Lucifer’s lost Golden Age. It is through the finances, the government, the religion and the social orders that Lucifer’s agenda marches on to enslave Humanity. Instead of bestowing his promised ‘light and liberty’, knowledge and revelation, Lucifer seeks to totally destroy Humanity. Why?

Humanity is created in the very image and likeness of YHVH, the Creator. Moreover, YHVH chose to redeem and rescue Humanity, Adam's race and not Lucifer's race. YHVH chose to elevate moral man to the level of divinity. This was so much as being constituted as part of the Bride of Christ. Humanity will co-rule with Jesus Christ, GOD the Son who took on the form not of Fallen Angel as the book of Hebrews states but the decedents of Abraham, a human. Furthermore, the literal Hell, as the place of unquenchable fire has been prepared for the Devil and his Angels.

Sadly, all those humans that willfully side with the original Rebel will be sent there also; a place not intended for humans but Angelic beings only. Thus, since civilization has organized itself after the fall of Adam and Eve, those that have conglomerated the finances, religion and government in the world have been mainly the Oligarchy of each civilization and/or societies. This is not to implicate all those that work in finance, government, organized religion or social causes but at the very top, those that pull the strings, the ‘shadow governments’ and people are well aware and connected to such beings even now. Their world capitals, palaces, pyramids exclaim this, hidden in plain sight.
_____________________________