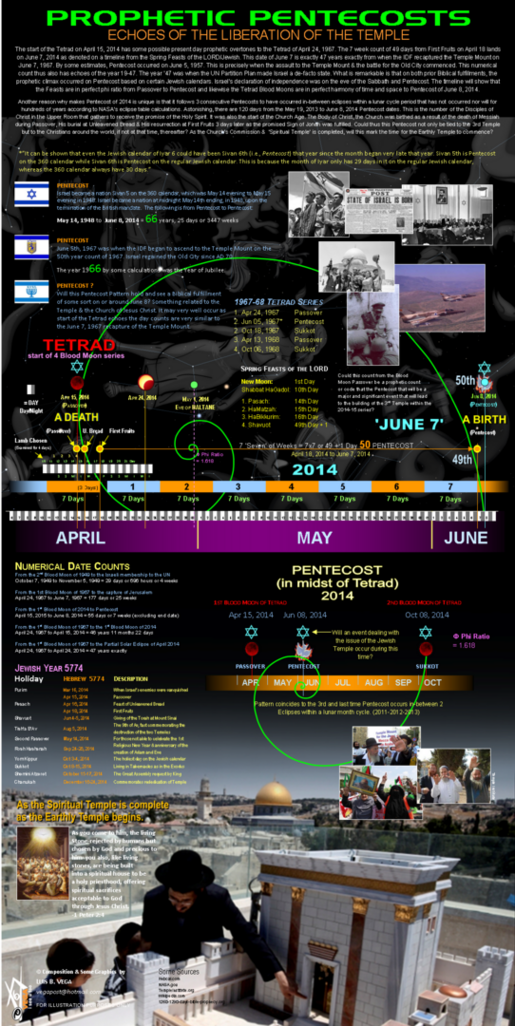 #72
PROPHETIC PENTECOSTS
ECHOES OF THE LIBERATION
The Temple Mount Flashpoint

‘As you come to him, the living Stone—rejected by humans but chosen by God and precious to him, you also, like living stones, are being built into a spiritual house to be a holy priesthood, offering spiritual sacrifices acceptable to God through Jesus Christ.’ -1 Peter 2:4-5

The purpose of this study is to compare the start of the Tetrad of April 15, 2014 to see if there have been some possible present-day prophetic overtones to the Tetrad of April 24, 1967. The 7-week count of 49 days from First Fruits on April 18, 2014 occurred on June 7, 2014 as illustrated on the timeline. It appears to parallel the liberation date of Jerusalem in 1967. This date of June 7 is exactly 47 years from when the IDF recaptured the Temple Mount on June 7, 1967. By some estimates, Pentecost occurred on June 5, 1957 by some alternative estimates. This is precisely when the assault to the Temple Mount and the battle for the Old City commenced.

This numerical count thus also has echoes of the year 1947. The year 1947 was when the UN Partition Plan made Israel a de-facto state. What is remarkable is that on both prior Biblical fulfillments of 1948 and 1967, the prophetic climax occurred on Pentecost based on certain Jewish calendars. Israel’s declaration of independence was on the eve of the Sabbath and Pentecost. The timeline will show that the Feasts approximated a phi ratio from Passover to Pentecost and likewise the Tetrad Blood Moons are in perfect harmony of time and space to Pentecost Feasts. Another reason what made Pentecost of 2014 unique was that it followed 3 consecutive Pentecosts having occurred in-between eclipses within a lunar cycle period that has not occurred nor will for hundreds of years according to NASA’s eclipse table calculations.

As it has already been noted, astonishing there was exactly 1 year and 20 days from the May 19, 2013 to June 8, 2014 Pentecost dates. This ‘120’ numerical code was the number of the Disciples of Christ in the Upper Room that gathered to receive the promise of the Holy Spirit. It was also the start of the Church Age. The Body of Christ, the Church was birthed as a result of the death of Messiah during Passover. His burial was at Unleavened Bread and His resurrection was at First Fruits. Jesus rose from the dead 3 days later from Passover as the promised and according to the given Sign of Jonah.

Thus could Pentecost not only be tied to the 3rd Temple but to the Rapture of the Bride of Christ, if not at that time, thereafter? As the Church’s Commission and ‘Spiritual Temple’ is completed, will this mark the time for the earthly Temple to commence? Perhaps the 3 sequential astronomical Pentecosts were a sort of countdown to coincide with the end of the Tetrad sequence.

PENTECOST: Jerusalem
June 5th, 1967 was when the IDF began to ascend the Temple Mount on the 50th year count of 1967. Israel regained the Old City as a nation for the first time since 70AD. The year 1966 by some calculations was the 49th year, making 1967 the Year of Jubilee.
The following is the time from when Israel recaptured the Temple Mount on Pentecost 1967 to the Pentecost of 2014.

PENTECOST: Temple?
Will this Pentecost Pattern hold and see a Biblical fulfillment of some sort that will lead to the 3rd Temple? Will the Rapture of the Bride of Christ occur also around such a Holy Feast of YHVH? As the Church was birthed on Pentecost, it was attributed to the Signs in the heavens as the Apostle Peter referenced Joel. It may very well occur as a similar pattern of how the Church Age could conclude with perhaps similar celestial attributes and related to a Pentecost season of harvest. For example, the Pentecost in-between the eclipses of 2013 to the Pentecost of 2014 had echoes of the 120 number in the Upper Room of the 1st Pentecost.

Could this count from the Blood Moon Passover to Passover, a 49 day count plus 1 day be a prophetic count or code that Pentecost will be a major and significant event that will lead to the rapture of the Bride of Christ and the subsequent building of the 3rd Temple thereafter? Will an event dealing with the issue of the Jewish Temple be trigger by the Rapture or another prophetic event?

Perhaps these prophetic times involving the astronomical Signs such as the Tetrads and the Temple are tied to the completion of the Church Age that has been characterized by Christ. Is the completion of His ‘Spiritual Temple’ then to allow the start of the building of the earthly Temple for the nation of Israel? Could this in turn start the final countdown to the Tribulation and subsequent Return of Messiah?
______________________ 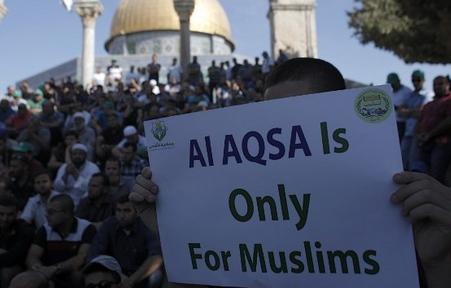