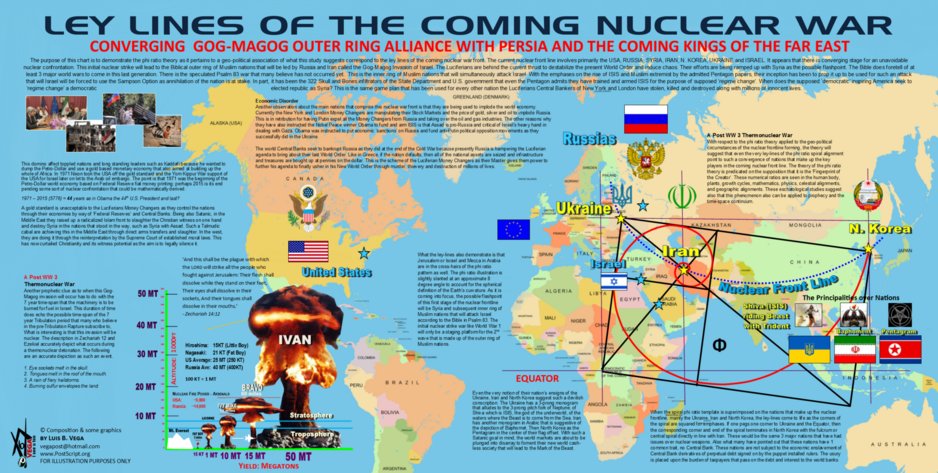 ‘This is what the Sovereign Lord says: You are the one I spoke of in former days by my Servants the Prophets of Israel. At that time they prophesied for years that I would bring you against them. This is what will happen in that day: When Gog attacks the land of Israel, my hot anger will be aroused, declares the Sovereign Lord.’ – Ezekiel 38:17-19

The purpose of this study along with chart is to demonstrate the phi ratio theory as it pertains to a geo-political association of what this study suggests corresponds to the ley lines of the coming nuclear war front. The current nuclear front line involves primarily the USA, RUSSIA, SYRIA, IRAN, N. KOREA-CHINA, UKRAINE and ISRAEL. It appears that there is converging stage for an unavoidable nuclear confrontation. This initial nuclear strike will lead to the Biblical outer ring of Muslim nations that will be led by Russia and Iran called the Gog-Magog Invasion of Israel at some point. The Luciferians are behind the current thrust to destabilize the present World Order and induce chaos. Their efforts are being ramped up with Syria as the possible flashpoint. The Bible does foretell of at least 3 major world wars to come in this last generation. There is the speculated Psalm 83 war that many believe has not occurred yet.

This is the inner ring of Muslim nations that will simultaneously attack Israel. With the emphases on the rise of ISIS and Muslim extremist by the admitted Pentagon papers, their inception has been to prop it up to be used for such an attack that will involve Israel. At some point Israel will be forced to use the Sampson Option as the annihilation of the nation is at stake. In part, it has been the 322 Skull and Bones infiltrators of the State Department and U.S. government that even the Pentagon admits they have trained and armed ISIS for the purpose of supposed ‘regime change’ through the Facebook initiated ‘Arab Springs’. This is the same game plan that has been used for every other nation the Luciferians Central Bankers of New York and London have stolen, killed and destroyed along with millions of innocent lives.

The CIA and MOSSAD like in the case of Iran in the 1950s forced ‘regime change’ by installing the Shah and a reign of terror through the Savak because they nationalized the oil fields. Iran is no better now with the Shi’a apocalyptic theocracy that seeks to usher in the 3rd World War to hasten the coming of their Messiah the Mahdi. Currently as part of this destabilization, Europe and America on the backside are allowed to accept the hordes of mostly Muslim migrants to collapse the order of their societies. Playing a key role in the possible scenario leading up to World War 3 is the Ukraine that has already been taken over by the Central Banks. Obama has consented to Iran’s demands on the nuclear deal while they still chant ‘Death to America’. All the while as Obama arms ISIS and Iran, it seeks to disarm its citizens and the 2nd Amendment.

A Post WW 3 Thermonuclear War
With respect to the phi ratio theory applied to the geo-political circumstances of the nuclear frontline forming, the theory will suggest that even the very ley-lines of the phi ratio spiral alignment point to such a convergence of nations that make up the key players in the coming nuclear front line. The theory of the phi ratio theory is predicated on the supposition that it is the ‘Fingerprint of the Creator’. These numerical ratios are seen in the human body, plants, growth cycles, mathematics, physics, celestial alignments, and geographic alignments, etc. These eschatological studies suggest also that this phenomenon also can be applied to prophecy and the time-space continuum.

When the spiral phi ratio template is superimposed on the nations that make up the nuclear frontline, mainly the Ukraine, Iran and North Korea, the ley-lines come to life as the corners of the spiral are squared for emphases. If one pegs one corner to Ukraine and the Equator, then the corresponding corner and end of the spiral terminates in North Korea with the fulcrum or central spiral directly in line with Iran. These would be the same 3 major nations that have had issues over nuclear weapons. Also, what many have pointed out that these nations have 1 common trait, no Central Bank. These nations are not subject to the economic enslavement of Central Bank derivatives of perpetual debt signed on by the puppet installed rulers. The usury is placed upon the burden of the taxpayers that pass on the debt and the interest to the world banks

What the ley-lines also demonstrate is that Jerusalem or Israel and Mecca in Arabia are in the crosshairs of the phi ratio pattern as well. The phi ratio illustration is slightly slanted at an approximate 8-degree angle to account for the spherical definition of the Earth’s curvature. As it is coming into focus, the possible flashpoint of this first stage of the nuclear frontline will be Syria and subsequent inner ring of Muslim nations that will attack Israel according to the Bible in Psalm 83. The initial nuclear strike war like World War 1 will only be a staging platform for the 2nd wave that is made up of the outer ring of Muslim nations. This is the Gog-Mag war that is spear-headed by Russia and Iran. The aim will be to take a spoil of Israel this time around.

Another prophetic clue as to when this Gog-Magog invasion will occur has to do with the 7-year time-span that the machinery is to be burned for fuel in Israel. This duration of time does echo the possible timespan of the 7 year Tribulation period that many who believe in the pre-Tribulation Rapture subscribe to. What is interesting is that this invasion will be nuclear as described in Zechariah 12 and Ezekiel. They accurately depict what occurs during a thermonuclear detonation. The following are an accurate depiction as such an event. In Zechariah 14:12 it describes what many believe to be the effects of a thermos-nuclear detonation. ‘And this shall be the plague with which the Lord will strike all the people who fought against Jerusalem: Their flesh shall dissolve while they stand on their feet, Their eyes shall dissolve in their sockets, And their tongues shall dissolve in their mouths.’

1. Eye sockets melt in the skull.
2. Tongues melt in the roof of the mouth.
3. A rain of fiery hailstorms.
4. Burning sulfur envelopes the land.

The following is a comparison to the destructive power of the initial first atomic bomb to what nations have now. Russian has the most powerful nuclear bomb called Ivan, as in Ivan the Terrible. The illustrated chart by the same title will show that when detonated at ground level, its mushroom cloud will reach approximately 10 times higher than Mt. Everest.

Economic Disorder
Another observation about the main nations that comprise this nuclear war front is that they are being used to implode the world economy. Currently the New York and London Money Changers are manipulating their Stock Markets and the price of gold, silver and oil to implode Russia. This is in retribution for having Putin expel all the Money Changers from Russia and taking over the oil and gas industries. The other reasons why they have also instructed the Nobel Peace winner Obama to fund and arm ISIS is that Assad is pro-Russia and critical of Israel’s heavy hand in dealing with Gaza. Obama was instructed to put economic ‘sanctions’ on Russia and fund anti-Putin political opposition movements as they successfully did in the Ukraine.

The world Central Banks seek to bankrupt Russia as they did at the end of the Cold War because presently Russia is hampering the Luciferian agenda to bring about their last World Order. Like in Greece, if the nation defaults, then all of the national assets are seized, and infrastructure and treasures are bought up at pennies on the dollar. This is the scheme of the Luciferian Money Changers as their Master gives them power to further his agenda to finally usher in his New World Order through murder, thievery, and destruction of millions of innocent lives. This was seen for example in the instructions to Obama to influence the start of the Arab Springs.

This domino-affect toppled nations and long standing leaders such as Kaddafi because he wanted to dump the Petro-Dollar and use a gold based monetary economy that also aimed at building up the whole of Africa. In 1971 Nixon took the USA off the gold standard and the Yom Kippur War support of the USA for Israel later on let to the Arab oil embargo. The point is that 1971 was the beginning of the Petro-Dollar world economy based on Federal Reserve fiat money printing; perhaps 2016 is its end pending some sort of nuclear confrontation that could be mathematically derived.

A gold standard is unacceptable to the Luciferians Money Changers as they control the nations through their economies by way of ‘Federal Reserves’ and Central Banks. Being also Satanic, in the Middle East they raised up a radicalized Islam front to slaughter the Christian spiritual witness on one hand and destroy Syria in the nations that stood in the way, such as Syria with Assad. Such a Talmudic cabal are achieving this in the Middle East through direct arms transfers and slaughter that implicates the Pentagon, the State Department, and the White House. In the west, particularly in the USA, they are doing it through the reinterpretation by the Supreme Court of established immoral laws. This has now curtailed Christianity and its witness potential as the aim is to legally silence it.

Assad compared to other Middle East rulers was and is by far the most benevolent. He is western educated, a medical doctor by training and knows the Hippocratic Oath. By far, his nation was elevated to one of the most prosperous of the non-oil producing nations. This could not be allowed by the MOSSAD and other Luciferian agents that seek to make it the spark that will initiate the Biblical ‘Confirming the Covenant’ with the Many and Israel. The U.S. Talmudic controlled media also are alarming the sheeple of the dangers of the current Russian and Iranian based build up in Syria. They fail to mention that the U.S. alone has over 100 military bases surrounding Iran and Russia. Even the very notion of their nation’s ensigns of the Ukraine, Iran and North Korea suggest such a devilish conscription.

In an esoterical inference, the Ukraine has a 3-prong monogram that alludes to the 3-prong pitch fork of Neptune, of Shiva which is ISIS, the god of the underworld, of the waters where the Beast is to come from the Sea. Iran has another monogram in Arabic that is suggestive of the depiction of Baphomet. Then North Korea as the Pentagram in the center of their flag offset. These are what the Bible calls the Fallen Angelic Principalities and Powers that hold sway over the nations. With such a Satanic goal in mind, the world markets are about to be plunged into disarray to foment their New World Order with a cashless society that will lead to the Mark of the Beast. The coming New World Order will be a function of what this study has suggested that the nuclear war front is even apparent in the makeup of the very ley-lines that involve the main players to the coming nuclear confrontation, the Ukraine, Syria, Israel, Iran and North Korea-China.
_____________________