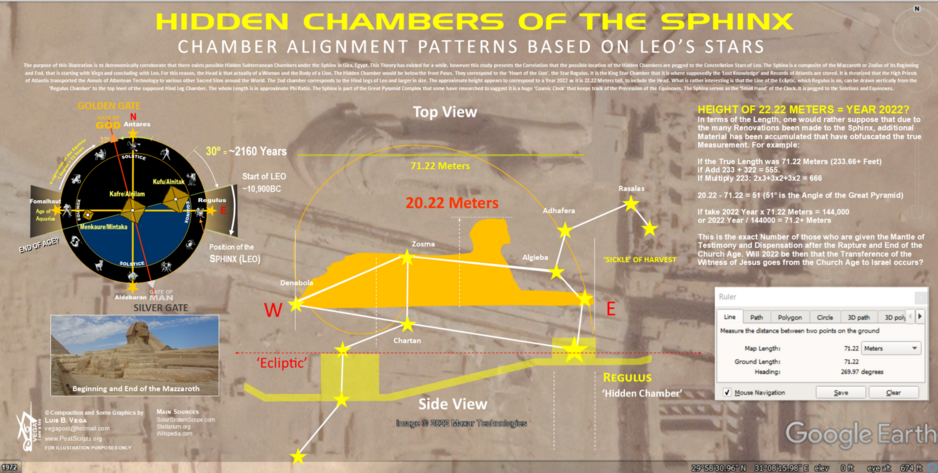 ‘The Heavens declare the Glory of YHVH; the skies proclaim the work of his hands. Day after Day they pour forth Speech; Night after Night they reveal Knowledge. They have no Speech, they use no Words; no Sound is heard from them. Yet their Voice goes out into all the Earth, their Words to the Ends of the World. In the Heavens YHVH has pitched a Tent for the Sun. It is like a Bride Groom coming out of his Chamber, like a Champion rejoicing to run his Course. It rises at one End of the Heavens and makes its Circuit to the other; nothing is deprived of its Warmth’. -Psalm 19:1-6

The purpose of this study is to Astronomically corroborate that there exists possible Hidden Subterranean Chambers under the Sphinx in Giza, Egypt. This Theory has existed for a while. In recent Times, this notion of Hidden Chambers beneath the Sphinx was sensationalized by the late ‘Sleeping Prophet’ in America, Edgar Casey of the USA. In the Mid-1800s, he had what are called ‘Readings’ that he claims were obtained from the supposed Cosmic Data Bank or ‘Library’ like one would go to check-out a Book.

It was not until the Mid-1970s that a Team of Scientists made some Sonar Type of Readings in Egypt, under the Right Paw of the Sphinx. They did find Evidence of Chambers but were stopped by the Egyptian Army. However, this study presents the Correlation that the possible location of the Hidden Chambers is pegged to the Constellation Stars of Leo. The Sphinx is a composite of the Mazzaroth or Zodiac of its Beginning and End, that is starting with Virgo and concluding with Leo. Why? It is the Celestial Storyline of the ‘Gospel in the Stars’.

They narrate the Birth, Crucifixion and Resurrection of Jesus Christ, the very Creator of all things. For this reason, the Head is actually that of a Woman and the Body of a Lion. The Hidden Chamber would be below the front Paws. They correspond to the ‘Heart of the Lion’, the Star Regulus. It is the King Star Chamber that is where supposedly the ‘Lost Knowledge’ and Records of Atlantis are stored. It is theorized that the High Priests of Atlantis transported the Annals of Atlantean Technology to various other Sacred Sites around the World.

The 2nd Chamber corresponds to the Hind Legs of Leo that are larger in size. The approximate Height appears to correspond to a Year 2022 as it is 22.22 Meters tall, to include the Head. What is rather interesting is that the Line of the Ecliptic, which Regulus is on, can be drawn vertically from the ‘Regulus Chamber’ to the top level of the supposed Hind Leg Chamber. The whole Length is in approximate Phi Ratio. The Sphinx is part of the Great Pyramid Complex that some have researched to suggest it is a huge ‘Cosmic Clock’ that keeps track of the Precession of the Equinoxes.

Celestial Clock
The Sphinx perhaps serves as the ‘Small Hand’ of the Clock. The Sphinx is pegged to the Yearly Markers for the Solstices and Equinoxes. The Great Sphinx of Giza was cut out of a single Limestone Bedrock to create the Statue of a reclining Sphinx. The Sphinx, along with the 3 Pyramids mirror the 3 Stars of Orion are believed by some to be a ‘Clock’. This Monument on earth is keeping track of Celestial Time of the Ages.

It is believed by some that prior Epochs existed before the Creation of Adam and Eve as recounted in the Book of Genesis. This is based on the Gap Theory where the Earth ‘Became Formless and Void’. This presumes a prior Existence of Time, Space and Matter that went from Order to Chaos, etc. Thus, the Sphinx serves as a sort of ‘2nd Hand of a Clock’ that welcomes every New Sunrise to the East. This Theory also puts the Sphinx much older than the Great Pyramids of Giza, but it is directly related.

This Sphinx is believed to have been constructed before the Flood of Noah and survived, with Evidence of the Water Erosion. It stands on the Giza Plateau on what was the former edge of the Nile River in Giza, Egypt. The face of the Sphinx appears to represent the Pharaoh Khafre. But any possible Appearance is only the Renovation Attempts of such Pharaohs that have stamped their Seal to attest that they only hand Renovated the Structure found there when the Egyptians come onsite.

The Sphinx is the oldest known monumental sculpture in Egypt and one of the most recognizable statues in the world. And many have taken Measurements over the Centuries. If one believes in the Distance-to-Year Theory, such as associated with the Longitude and Latitude of Earth, then the following Mathematical Correlations will not seem that far-fetched. After all, there is the Christ Angle that is measured from the Great Pyramid and many have correlated every Cubic Inch to mean a Year from the Ascending Passage Theory, etc.

What one proposes is that the Height and Width of the Sphinx, in some mysterious way has encoded the Time, the Church Age will conclude. And that Year is? 2022. This Notion is based on the Height of the Base to the top of the Head of the Sphinx, being 20.22 Meters. Most online Sources will round this Measurement off to 20 Meters High or 66 Feet high. This same Rounding-Off goes for the Length being stated as 73 Meters or 240 Feet, etc. The following Sources have the more Generic Measurements Round-Offs: History Channel, Wikipedia, Encyclopedia Britannica.

Only Interesting Engineering and Wonders-Of-The-World.net sources confirm the more Precise and/or Exact Measurement of the Sphinx actually being 220.22 Meters high.

‘It becomes apparent when you consider the size of the Sphinx. The Great Sphinx of Giza is the world’s largest monolith statue. It measures 20.22 meters in height, 19.3 meters in width and 73.5 meters in length’. But there are some sites online that give a more Precise Measurement which follows.

One would rather suppose that due to the many Renovations that have been made to the Sphinx over the Millenia, additional Material has been accumulated that have obfuscated the true Measurement. One surmises that the true Length was less by 2 Meters. For example:

Why the Discrepancy or issue? It is important because if the Sphinx and the 3 Pyramids pegged to Orion are a Celestial Clock of Time, then they have a Precise Time ‘exposure’ or Expiration Date. This is to say and suggest, that Prophetically Speaking, the Sphinx might have well Encoded the Year, 2022 that the Church Age ends and when the Dispensation of the Law commences, regarding the Last Sabbath Cycle of Daniel. And?

If the Resurrection-Rapture Event is to take place in 2022, then it will be like in the Typology of Elijah leaving the Mantle to Elisha to conclude the Restoration of Israel, now that the Gentile Bride has been Completed. And that Spiritual Endeavor that has been in the works, much like a Pyramid, constructed as a Spiritual House. Once completed, then it will make way for the 3rd Temple, the Physical Temple to be reconstructed on the Temple Mount in Jerusalem.

These Scenarios are based on what the Bible teaches, however the details are debatable. But if indeed, the Sphinx Encoded the 144,000 Numerical Coefficient to suggest that the literal 144,000 Jews will be Evangelizing the World after the Rapture will be like those who are given the Mantle of Testimony and Dispensation. Will 2022 be then when the Transference of the Witness of Jesus goes from the Church Age to Israel?

Update:
It is rather interesting that in 2022, it has come up, as many believe the 'Eyes’ of the Sphinx were captured on video being closed. It caused a sensation in Egypt. And? The Egyptians have a lore that when that last happened, the World ‘Order’ Collapses and a ‘Transition’ to the New One is to occur. Thus, one likes to liken this ‘Transference’ Type to what is happening with the USA as it did with Atlantis. How so? Atlantis, a mighty Technological advance Nation-Continent in the West became Haughty, Proud and Degenerate. The ‘Gods’ were displeased and condemned the Nation-Continent to sink below as Judgment befell its Civilization. According to Plato, the High Priests of Atlantis went to Egypt to give their Records for safekeeping. They placed all those Items under the Paws of the Sphinx.

As we are witnessing the Fall and Judgment of the USA, the Nation-Continent, it is being used to ‘birth’ the New World Order with the coming Reset. The USA is ‘Sinking’. But how is the Sphinx related to End Times and the Rapture or End of the Church Age? As mentioned in the post, the height of the Sphinx is 20.22 Meters, precisely. True. But my take on is, is that the Length, currently at 73.22 Meters is not the original Measurement. Why not?

To reiterate, the Renovations or the Millennia have added Material that has off-set the true Length by 2 Meters of added Masonry. The Height cannot be added as that was very difficult to do but not at Ground Level as it is even the case now of the Renovations that are being done at the Base. This to say that the actual Length was 71.22 Meters. Why is this important? One suggests that the very Dimensions of the Sphinx, Height and Length Encode the End of the Church Age. Year? 2022 as a Fractal of 20:22. And that factoring in the Multiple of 71.22 produces the Variable of 144,000.

One surmises that if, it be true that by September of 2022 is the actual End of the Church Age and the Rapture event would have taken place by then, it signals that the 144,000 Anointed Jewish Evangelists, as Witnesses of the Testimony of and to Jesus would be then Commissioned under the New Dispensation of returning to the Law of Moses. Israel will be under this as the Gentiles will be under the Noahide Laws during the 7 Year Tribulation or the Last Sabbath Cycle, i.e., Shemitah.

One would then consider this Theory as Evidence for why 2022, is the Last Year in the Gregorian Calendar to End the Church Age with. One will have to see. Like Elijah giving to Elisha the Mantle of Testimony and Dispensation, will 2022 be the Year then that the Transference of the Witness of Jesus goes from the Church Age to Israel occurs? Will it be the Year, that like a Sinking Nation-Continent like Atlantis was and the USA currently is, Metaphorically, will have its ‘Sacred Knowledge’ and Technology transferred be given over to the New World Order? This is what one is suggesting Biblically Speaking.
_____________________

Ancient Aliens: The Sphinx and the Secrets of Atlantis
https://www.youtube.com/watch?v=IoQ7qkm31Pw 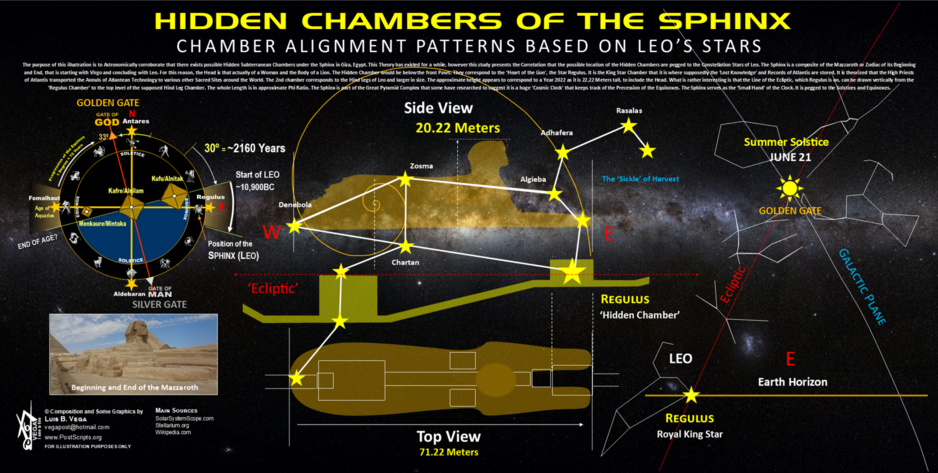