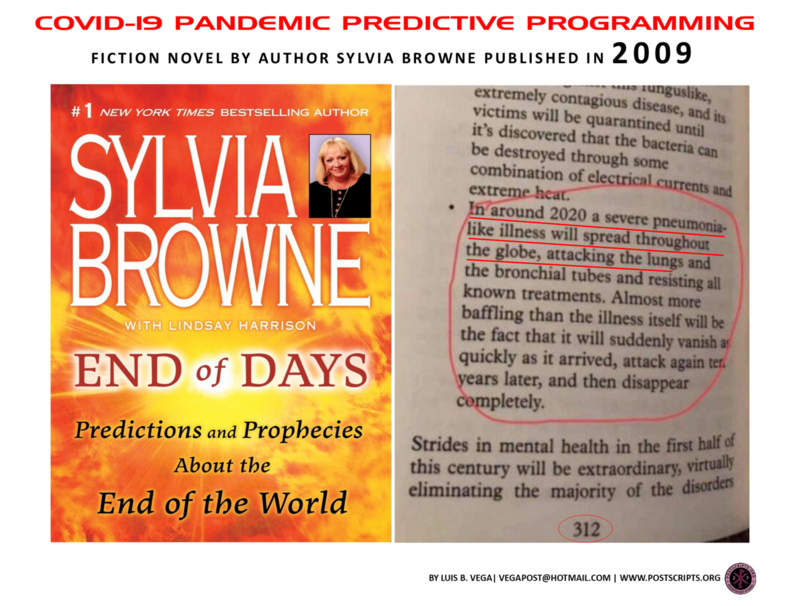 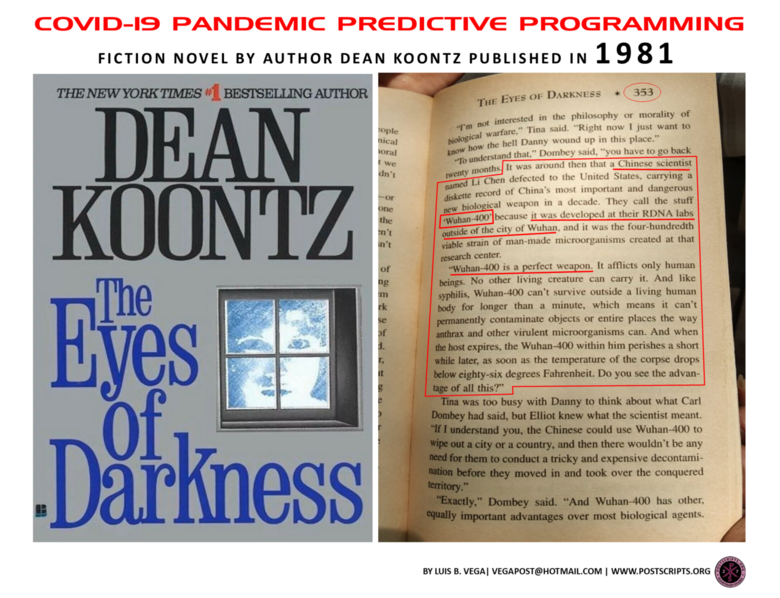 Samples of Books, Films and Reports

The purpose of this study is to present some particular Books, Reports and Movie List that appeared to Predictively Programmed the outbreak of COVID-19 Virus. Some details of such books in particular that were written in the 1980’s and later have amazing matching points. What further is alarming is that world renowned Foundations, such as the Bill and Malinda Gates partnering with Prestigious Universities have modeled such a COVID-19 Pandemic or has it really been a ‘Plandemic’ after all?

As more private and public Companies and Government Agencies are requiring the COVID-19 Injections, it is becoming too clear that the end goal isa New COVID World Order. Fiction Novel by Author Dean Koontz published in 1981 entitled, The Eyes of Darkness and other books like Sylvia Browne’s End of Days spoke of a ‘Wuhan Virus’ being released as a bioweapon. Author, Epperson’s, The New World Order highlight the progression of evidence that would lead to the eventual total authoritarian control of the World, and part of it would be through Medicine. Evidence?

On October 18, 2019, the CHS partnered with the World Economic Forum and the Bill and Melinda Gates Foundation to host the tabletop exercise Event 201 in New York City. The exercise illustrated areas where Public/Private Partnerships will be necessary during the response to a severe Pandemic in order to diminish large-scale economic and societal consequences. Event 201 simulated the effects of a fictional Corona Virus originating in bats but passing to humans via pigs. Many believe that Event 201 was a rehearsal for the world's response to COVID-19.

Below are samples of Books and Movie/Films and of presentations of how what the Rockefeller Lockstep Scenario was written about as ether fiction or a prognostication of what eventually come to be known as the Corona Virus Plandemic.

SCENARIOS FOR THE FUTURE
FUTURE OF TECHNOLOGY AND INTERNATIONAL DEVELOPMENT
A Rockefeller Foundation Report: 2010

Excerpt from Lockstep Report
‘China’s government was not the only one that took extreme measures to protect its citizens from risk and exposure. During the pandemic, national leaders around the world flexed their authority and imposed airtight rules and restrictions, from the mandatory wearing of face masks to body-temperature checks at the entries to communal spaces like train stations and supermarkets.

Even after the pandemic faded, this more authoritarian control and oversight of citizens and their activities stuck and even intensified. In order to protect themselves from the spread of increasingly global problems — from pandemics and transnational terrorism to environmental crises and rising poverty — leaders around the world took a firmer grip on power.

At first, the notion of a more controlled world gained wide acceptance and approval. Citizens willingly gave up some of their sovereignty — and their privacy — to more paternalistic states in exchange for greater safety and stability. Citizens were more tolerant, and even eager, for top-down direction and oversight, and national leaders had more latitude to impose order in the ways they saw fit. In developed countries, this heightened oversight took many forms: biometric IDs for all citizens, for example, and tighter regulation of key industries whose stability was deemed vital to national interests. In many developed countries, enforced cooperation with a suite of new regulations and agreements slowly but steadily restored both order and, importantly, economic growth. ’

1st Phase:
Common/cold/Flu. Mild symptoms at most. Media endorsement of mass paranoia and fear. Flawed testing system utilized, which picks up any genetic material in the body and triggers a positive result. Inflation of Covid case numbers, through changing of death certificates, double-counting, and classifying all deaths including other diseases and natural causes as Covid19. Lockdown will condition us to life under Draconian Laws, prevent protests and identify Public Resistance.

2nd Phase:
The 1st Phase will lead to compromised and frail immune system through lack of food, social distancing, wearing of masks, and lack of contact with sunlight and healthy bacteria. Exposure to 5G Radiation will further attack the immune system. Thus, when People re-emerge into society, more people will fall ill. This will be blamed on COVID-19. This will all occur before the vaccination is ready to justify it. A longer and more potent Lockdown will follow until everyone takes the vaccine.

3rd Phase:
If majority of People resist the vaccine, a weaponized SARS/HIV/MERS virus will be released. A lot of people will die from this. It will be survival of the fittest. It will also be the ultimate push for everyone to be vaccinated, in order to return to normality. Those who have taken the vaccine will be at war with those who have not. It will be Anarchy from all sides.

‘Returning from a Hong Kong business trip, Beth Emhoff meets with her former lover during a Chicago layover. Two days later, back home in suburban Minneapolis, Beth's husband, Mitch rushes her to the hospital when she suffers a seizure. She dies from a previously unknown virus. Returning home, Mitch finds that his stepson, Clark, has also died. Mitch is isolated but found to be naturally immune.

After being released, Mitch protectively keeps his teenage daughter, Jory, quarantined at home. In Atlanta, Department of Homeland Security representatives meet with Dr. Ellis Cheever of the Centers for Disease Control and Prevention (CDC) over concerns that the disease may be a bioweapon. Cheever dispatches Dr. Erin Mears, an Epidemic Intelligence Service officer, to Minneapolis where she traces everyone having had contact with Beth. As the novel virus spreads, several cities are placed under quarantine, causing panic buying, widespread looting, and violence.

At the CDC, Dr. Ally Hextall determines the virus is a combination of genetic material from pig and bat-borne viruses. Scientists are unable to discover a cell culture to grow the newly identified MEV-1. Cheever determines the virus too virulent to be researched at multiple labs and restricts all work to one government site. Hextall orders University of California researcher Dr. Ian Sussman to destroy his samples.

Believing he is close to finding a viable cell culture, Sussman violates the order and identifies a usable cell culture, from which Hextall develops a vaccine. Scientists determine the virus is spread by respiratory droplets and fomites, with an R0 of four when the virus mutates; they project that 1 in 12 of the world population will be infected, with a 25–30% mortality rate.

Conspiracy Theorist Alan Krumwiede blogs about the virus. He claims to have cured himself of the virus using a homeopathic cure derived from forsythia. People seeking forsythia violently overwhelm pharmacies. Krumwiede, having faked being infected to boost sales of forsythia, is arrested for conspiracy and securities fraud.’

Sound familiar? Here is a composite of what really conveys such Predictive Programing. As to novels predicting specifically the COVID, there is The Eyes of Darkness. It is a thriller novel by American writer Dean Koontz, released in 1981.

It amazingly talks about a Wuhan Virus being released as a bioweapon and how a Chinese Scientist defected to the USA warning of this. Well, if Reality is mimicking Art or Fictional Novels in this case, one might be aware that this actually happened.
__________________________