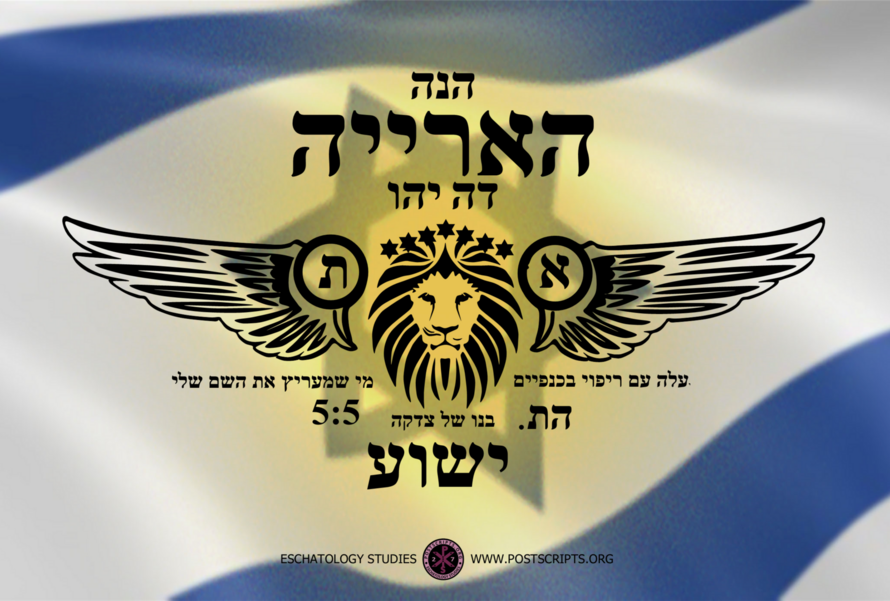 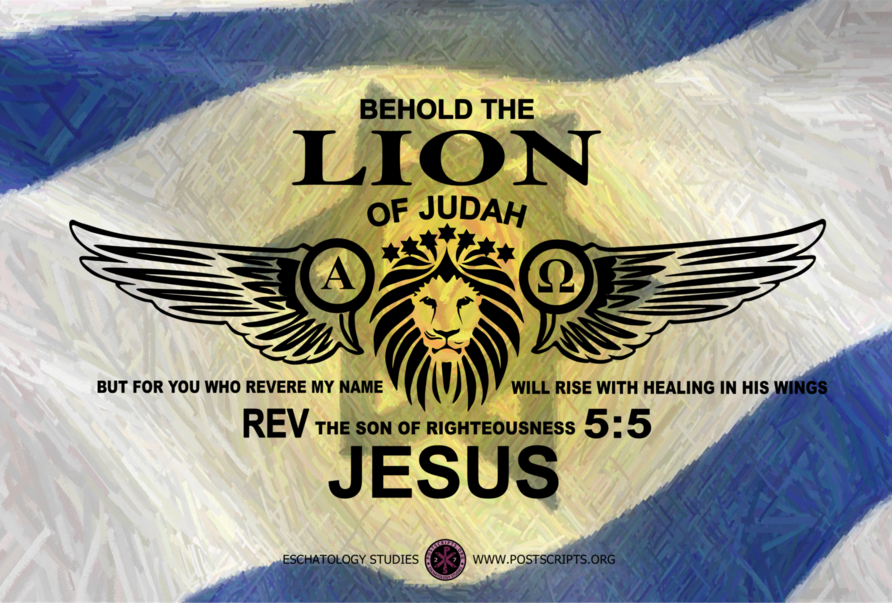 #495:
POSTER: LION OF JUDAH
ALPHA AND OMEGA
Jesus is the Worthy One to open the 7 Seals of Judgment

‘And one of the Elders said to me, “Do not weep; behold, The Lion from the Tribe of Judah, The Root of David, has prevailed to open the Scroll and its Seals.’ –Revelation 5:5

The following are 2 poster renditions of the Biblical theme of the Lion of Judah. The context is taken from the verse in Revelation 5:5 where the last remaining Apostle John, ‘The Beloved’ is transposed into Glory and is shown what follows thereafter in terms of the post-Rapture Last Days. He is shown that the Judgment of the World and of the coming AntiChrist will commence with the breaking of the 7 Seals by the Lamb ‘that was slain’ that is described also as the Lion of Judah. Apparently, what was required to open the Seals of Judgement was to have a perfect sinless human that could only qualify to set the sentencing into motion. Sentencing of whom? This setting is like a reading of a ‘Last Will and Testament’. The verdict is against Lucifer as he has been the Adversary or ‘Satan’ that ‘Accuses the Brethren’ before YHVH in the Judicial Court of Heaven. The Apostle John is a Prophetic Euphemism of the Rapture event and the Bride of Christ. The Bride of Christ needs to be there at the Court to appear before her ‘Accuser’ and face the Charges. However, it is the Lion of Judah, Jesus that vindicates her as the Last Adam.

This ‘Last Adam’ accomplished what Adam and Eve failed to do, that is to have been obedience, maintain Faith and Fellowship with the Creator, YHVH. It took GOD the Son to become a man, genetically from the blood of Adam to redeem the fallen Human Race. Now that Jesus triumphed over Sin, Satan and the World, He has the Legal Right and Authority now to pronounce Judgment against Sin, the World, Death and Lucifer and to expel him from the Realm of Heaven. Why? Lucifer has no more ground or excuse to ‘Accuse the Brethren’. All Sin and Disobedience has been paid for in full, in Jesus’ own Sinless Blood. Now this ‘Last Will and Testament’ is incorporated in the 7-fold Seal Scroll that contains the vindication of the Bride of Christ and the Judgment of the Lucifer, once and for all. If YHVH, had not had the Plan of Redemption devised in GOD the Son, all of Humanity would have perished in Hell. It was and is that dire straits of a condition as the Souls of every human is at stake. However, this vindication and payment of Sin made by Jesus has to be accredited to one’s own personal account.

Having Free Will, every human must willingly now request this transaction to be ‘credited’ to one’s Debt of Sin. Every human has the choice now to either have Jesus pay and cover the Debt of Sin and Rebellion or one will have to be evaluated to see if one can pay for oneself. How so? One will then be measure-up to what is required of YHVH’s Law, ‘Perfection’. But what one will now be measured against is Jesus. If one thinks that one’s own ‘Works’ or Character or Humanity will be enough on the Day of Judgment, when all of one’s Works will be put on the Divine Scale, then for such, that is a risk they are willing to take if they confide that they are just as ‘Perfect’ as Jesus was and is. However, no mere human has attained what Jesus obtained, a sinless life and a ‘Perfection’ that is only now being accepted by the Divine Council. This means that if one rejects Jesus’ ‘Perfection’, then one must stand and be as ‘Perfect’s as Jesus was/is. Only Jesus has obtained this, now all Authority over Sin, Satan, the World and Death is His.

Standard of Judgment
One sure proof that no mere human can obtain this same level of ‘Perfection’ as Jesus did is that no one apart from Jesus has had or will have Power and Authority over Sin, Satan, the World and ultimately Death. All of mankind will die physical unless one is appointed to the Rapture at which point one ‘is alive and remains’, etc. The Apostle John wept because as a Holy Man, even he realized that no human is sinless as all Humanity falls short of YHVH’s righteousness because of Adam’s disobedience that led to the Sinful Nature in Humanity. And worse, all Power and Authority over Earth and Government was taken from Adam and transferred to Lucifer. The Human Race was doomed due to the 1st Adam as his disobedience led to sin and Humanity’s fall condemned the entire Human Race to an eternal separation from the Creator. This condition would have existed, even so if not for GOD the Son who obeyed in love the Commission of GOD the Father to rescue Adam’s hopeless Human Race.

This recompense required an Eternal Death as the payment, a ‘Perfect Sinless Human’. Thus, it was necessary for GOD the Son to incarnate and become something He was not before, human. This is called the Hypostatic Union, that of being 100% GOD and 100% Man at the same time and in the same Person. Erroneously, ‘GOD’ did not die on the Cross of Calvary, but it was Jesus as the Last Adam, a perfect human, sinless that died there. He was sinless to the very Genetic Core of His flesh, uncontaminated with the Sin Nature that was passed down from Adam. This is why Jesus necessitated a Virgin Birth. Jesus’ physicality was that His Genetic Chromosomal make-up was different. What is spectacular to contemplate is that Jesus not only had to be confronted with the same temptations as the 1st Adam, but thereafter offer His life in exchange. Since He was willing, it was not a ‘Human Sacrifice’ as those are unwilling.

Before Jesus could be crowned the King from the Root of David as the Lion of Judah, He had to first come to deal with sin of mankind as a Lamb of YHVH. Jesus’ mission was precise and concise. He said of His Royal Commission that ‘He set His Face as Flint to go to Jerusalem’, i.e., the Cross of Calvary that awaited Him there. Flint is one of the hardest Elements on Earth, hard and sharp as was His mission and gaze. Why? It was because Jerusalem was the place and time where the exchange was designated to take place; Eternal Life for Eternal Death, Sin exchanged for Righteousness, etc. This ‘Historical Synthesis’ and point of Singularity changed the course of the Universe, human history and determined the outcome of the ‘War of the Seeds’ as foretold in Genesis 3:15. It was at this Nexus Point, at the Cross of Calvary where Jesus not only dealt with the Sin of Humanity but went further. Jesus bestows Co-Rulership and granted the qualification to be Co-Heirs of all that the Father has bestowed to the Son, which according to the Bible is everything.

It is all things and all Beings in Heaven, on Earth and beneath Earth that are now under Jesus’ Power, Control and Authority. The Lamb of YHVH is also identified by another Apostle, John the Baptist. John reiterated the Levitical requirements set forth by YHVH of what it required to ‘take away Sin’ as that is what John told the People, Jesus came to accomplish. Jesus was to be as ‘A Lamb led to the Slaughter’ as Isaiah foretold. And why did Jesus willingly endure the shame, the torture, and the nakedness on the Cross of Calvary? The Bible teaches that it was ‘for the joy set before Him’. The Cross of Calvary was to be the place of the Sinner. But Jesus saw the other side of the Cross of Calvary. Jesus knew that He was to have Consort, a Bride at His side on the other side. Jesus wants to share all that He is and has and will do with His Bride, the Bride of Christ. Amazingly, this ‘thing’, a Living Organism is collectively being constructed much like Eve was ‘constructed’ out of the same Genetic Material from Adam.

And that those individual People, humans as seen and spoken as ‘Living Stones’, a ‘Spiritual House’ is made-up of only those since the Cross of Calvary. The completion date will be the last day, when the appointed harvest time comes and the Church Age ends by the Resurrection-Rapture event. This is a special ‘Body’ as not even the Old Testament Saints will be part of this Bride of Christ. Amazing. Jesus knew of the victory and joy to come after the Cross of Calvary because it would bring ‘Many sons to Glory’. Thus, the Throne Scene is one in which Jesus is depicted in Revelation 5:5, 1st as a Lamb as it has been slaughtered, then as the overcoming Lion of the Tribe of Judah. Jesus then takes the Scroll from the Father and breaks open the 7 Seal Judgment.

An Elder around the Throne of YHVH tells John the Apostle to stop weeping because Jesus as the Last Adam, a human overcame Sin, the World, Lucifer and Death. This is why Jesus alone is the only one that is qualified, not Mohammed, not Buddha nor Krishna to pronounce the 7-fold Seal Judgment upon the Sin, the World, Lucifer and Death. As John the Revelator is the representative of the Bride of Christ, the Beloved, he witnessed in YHVH’s Judicial Court the ‘Adjudication’ of the Bride. It is now the Accuser of the Brethren that is to be accused and judged. The 7 Seals are the pronouncement of the Lamb’s Judgment that seals Lucifer’s doom and his destruction in the Lake of Fire for all Eternity.

The posters are in English and Hebrew that depict the euphemism of Jesus as the Lion of Judah, the Human Genetic Descendant of King David as the foretold Root of Jesse that grew up small and humble, poor but became the conquer on behalf of the Human Race, the ultimate Super Hero. In the poster rendition, Jesus as the Lion of Judah has the 7 Stars as a Crown on His head that symbolizes the 7 Seals of the Judgment and the 7 Spirits that burn as flames before the Throne of YHVH as a Menorah type even. The 7 Stars can also represent the 7 Churches of Asia as the book of Revelation does allude to them as being ‘Stars’ in the palm of Jesus’ hand.

Also in this graphic depiction, the Lion of Judah has wings that bridge the New Testament with the Old Testament. It bridges the notion that the victorious Messiah is one in the same that promises healing under the Sanctuary or covering of His Wings, from Malachi 4:2. This motif of the Messiah having ‘Wings’ is alluded to when Jesus come over the Mount of Olives. He saw Jerusalem at His Triumphal Entry through the Golden Gate and He stated out loud, weeping, ‘If only you, Jerusalem would have known this day of My Visitation’. And that how He, as the Messiah, ‘would have longed to gather you (Israel) as a Hen gathers her Chick under her Wings’, etc.

And that in 1 Person, there are 2 separate comings or Advents. Jesus is both Messiah ben Joseph and Messiah ben David. The Wings on the Lion incorporate another attribute of the King, the Messiah. Jesus is YHVH, the Creator. It is a Divine Mystery. GOD is the Beginning and the End, the Alpha and Omega, the Lamb and the Lion, etc. Jesus describes Himself in this same fashion, the Alef and the Tav, both in the book of Revelation and encrypted in Genesis 1:1, the Beginning and the End of the 2 Testaments.