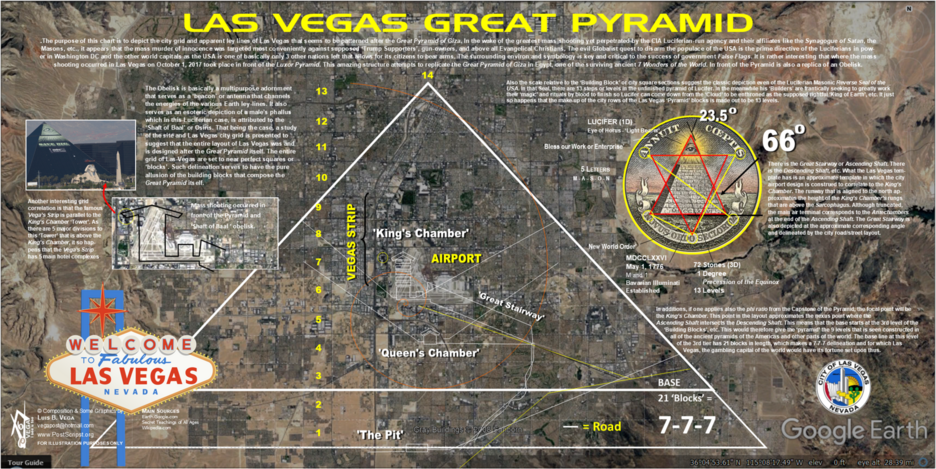 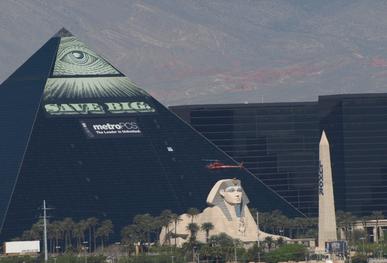 The purpose of this study is to depict the city grid and apparent ley lines of Las Vegas that seems to be patterned after the Great Pyramid of Giza. In the wake of the greatest mass shooting yet perpetrated by the CIA Luciferian-run agency and their affiliates like the Synagogue of Satan, the Masons, etc., it appears that the mass murder of innocence was targeted most conveniently against supposed ‘Trump Supporters’, gun-owners, and above all Evangelical Christians. The evil Globalist quest to disarm the populace of the USA is the prime directive of the Luciferians in power in Washington DC and the other world capitals as the USA is one of basically only 3 other nations left that allows for its citizens to bear arms.

As the efforts by the Luciferian Cabal had floundered under the former Illuminati appointment President, Obama, the quest has picked-up as Trump is systematically being slandered in the wave of the unpopularity of his Presidency. The pedophile Cabal of the owners who run the 6 major media conglomerates, the 6 major banks, and the 6 major governmental alphabet agencies are yet again pressing their False Flags by design to prepare the world for genocide that usually follows the confiscation of personal arms when a great point or nexus of societal transition is about to occur. These Darwinian Socialists abide, contrary to their mouthing-off, by the rule and protocol of the ‘Law of the Jungle’. In other words, it is a strife for the superior race to survive as the fittest. Such points in history attest to the mass murder and genocide of whole peoples when guns are confiscated.

This was the case against the Christian Armenians in Muslim Turkey. There is the genocide of Pol Pot, etc. It is well documented that the Khazarian Bolsheviks in Soviet Russia eventually had the populace relinquish their firearms by registration and then by compulsion. What happened next was the murder of over 40 million peasants mainly in the Ukraine and countryside as the refused to ‘collectivize’. Most were Christian and their food was commandeered to feed the Commissars in the urban areas as the farmers starved to death or were sent to the Gulags or are sent to such camps as in the case of North Korea. In Nazi Germany, another Socialist experiment saw Hitler outlaw personal firearms and the concentration campus ensued with systematic processes of genocide carried out scientifically based on Darwin’s theology.

In Maoist China, the worst mass murdered carried out in human history was the extermination of approximately 60-70 million people due to the ‘social justice’ quest to have the nation incur ’a Great Leap Forward’. As one can plainly study, the religion that has murdered more humans has been Communism for sure; in the quest to impose their ‘Pure Luciferian Doctrine’. In relation to the place and time of such a Luciferian killing, most False Flags are orchestrated to align the event at a particular place and time for maximum effect. The surrounding environ and symbology is key and critical to the success of government False Flags. It is rather interesting that where the mass shooting occurred in Las Vegas on October 1, 2017 took place in front of the Luxor Pyramid. This amazing structure attempts to replicate the Great Pyramid of Giza in Egypt, one of the surviving ancient 7 Wonders of the World. In front of the Pyramid is also a replica of an Obelisk.

The Obelisk is basically a multipurpose adornment that serves as a ‘beacon’ or antenna that channels the energies of the various Earth ley-lines. It also serves as an esoteric depiction of a male’s phallus which in this Luciferian case, is attributed to the ‘Shaft of Baal’ or Osiris. That being the case, a study of the site and Las Vegas city grid is presented to suggest that the entire layout of Las Vegas was and is designed after the Great Pyramid itself. When one puts the transparent template of the cross section of the Great Pyramid over the core of Las Vegas, some interesting alignments occur which are the following. The entire grid of Las Vegas are set to near perfect squares or ‘blocks’. Such delineation serves to have the allusion of the building blocks that compose the Great Pyramid itself. Also the triangle or pyramid outline encompasses the entire city from a north-south overlay from a top view perspective.

What is astonishing is that the various famous features of the core of the Great Pyramid also appear to approximate the various points and angle of how it is also mirrored in the ley-lines of Las Vegas. For example, the center piece of the Great Pyramid is the King’s Chamber. There is the Great Stairway or Ascending Shaft. There is the Descending Shaft, etc. What the Las Vegas template has is an approximate template in which the city airport design is construed to correlate to the King’s Chamber. The runway that is aligned to the north approximates the height of the King’s Chamber’s rungs that are above the Sarcophagus. Although truncated, the main air terminal corresponds to the Antechambers at the end of the Ascending Shaft. The Great Stairway is also depicted at the approximate corresponding angle and delineated by the city road/street layout.

Some additional clues to these pyramid angles that are mirrored in the city grid of Las Vegas from a top view are the roads that nearly parallel the angles of the Ascending Shaft, the entrance point to the Pyramid, the Descending Shaft and their connection to both as it is with the Great Pyramid even. Also the scale relative to the ‘Building Block’ or city square sections suggest the classic depiction even of the Luciferian Masonic Reverse Seal of the USA. In that Seal, there are 13 steps or levels in the unfinished pyramid of Lucifer. In the meanwhile his ‘Builders’ are frantically seeking to greatly work their ‘magic’ and rituals by blood to finish so Lucifer can come down from the ‘Cloud’ to be enthroned as the supposed rightful ‘King of Earth’, etc. It just so happens that the make-up of the city rows of the Las Vegas ‘Pyramid’ blocks is made out to be 13 levels.

In additions, if one applies also the phi ratio from the Capstone of the Pyramid, the focal point will be the King’s Chamber. This point in the layout approximates the nexus point where the Ascending Shaft intersects the Descending Shaft. This means that the base starts at the 3rd level of the ‘Building Blocks’, etc. This would therefore give the ‘pyramid’ the 9 levels that is seen constructed in all of the ancient pyramids of the Americas and other parts of the world. The base line at this level of the 3rd tier has 21 blocks in length, which makes a 7-7-7 delineation and for which Las Vegas, the gambling capital of the world would have its fortune set upon thus.

Another interesting grid correlation is that the famous Vega’s Strip is parallel to the King’s Chamber ‘Tower’ of stones that are immediately above the chamber. It is a mystery as to their function and purpose but some have postulated that it has to do with the resonance and frequencies of the energy ley-lines that converge at the King’s Chamber. As there are 5 major divisions to this ‘Tower’ that is above the King’s Chamber, it so happens that the Vega’s Strip has 5 main hotel complexes.

If one is familiar with the Luciferian initiations and protocols, the Las Vegas mass shooting was a classic text book operation and thus a mass ritualistic Satanic sacrifice to Lucifer at the base of ‘his temple’ by proxy. The area where the county music concert took place became the unexpected ‘altar’ as the required blood-letting serves to harness the energies of the souls lost to murder by the Luciferians and whom Jesus Himself attested to the fact that Lucifer is the original ‘Murderer from the Beginning’. It also serves as ‘ammunition’ for the Luciferian controlled celebrities to mouth-piece the efforts to emotionally call for all Americans to disarm, etc.

It is no secret that eye-witnesses heard explosions, others witnessed multiple shooters, others couth film of even a helicopter over the same area appearing to shoot down at the crowd as lights from fire discharged from the cabin, etc. Being that Las Vegas is a center of lights, sounds, allusions of magic and performances, it would not be that out of the ordinary in the confusion and comradery of events. As the airport is adjacent to the venue area, it was a perfect cover as aircraft are active all the time. One of the meanings of the name Vega is ‘bright light’. The fire power required for such a mass shooting that so far is the largest in USA’s history cannot be solely relegated to an individual that could barely walk, talk and think. Those in the Military will see, could see the signatures of ‘Special Operations’.

Even though the point at which the ‘shooter’ was located in the hotel is .33 nautical miles, it would have been impossible to be that accurate in the dark and at that distance to have such a kill rate. Those also keenly aware of and study False Flags see the same relentless predictable pattern by which the federal agencies set-up a Patsy to take the fall. Such ‘Assets’ are usually inept, on psychotropic drugs and under the control of a federal government ‘Handler’. In no way could such a man, have been alone or have all the intricacies to pull off such a heist. However, Biblical prophecy does speak of a time that will come when private guns will be outlawed in the entire world, among other things such as Christianity itself. It is a UN globalist agenda.

It will set the stage for the coming Luciferian AntiChrist that will have all legal power and precedence to mass murder in the name of ‘Social Darwinism’ or more appropriately, ‘Social Justice’. Those not adherent to the taking of the ‘Mark of the Beast’ in the coming Luciferian ‘Utopia’ will be deemed ‘Enemies of the State’ and exterminated. The quest of such Luciferians and their agenda is targeting the USA, as it stand in the way of total world dominance and their New World Order. It is no surprise that the concert venue was also next to the casino, called New York, New York.

The mass shooting was clearly a message to ‘Mr. New York’, himself, the President Trump. It was a clear message from the Freemasons, the Luciferians and their CIA Black Ops that if Trump does not come in line, his constitutes will be paying the price with their own blood. As it is, the continued spiritual war of the Luciferians against ‘Christmas’ continues. Until such a time comes, according to the Bible, it is Holy Spirit filled Christians that stand in the way as they are the spiritual force that restrains all-out evil and the plans of Lucifer and his Builders to flourish.
______________________