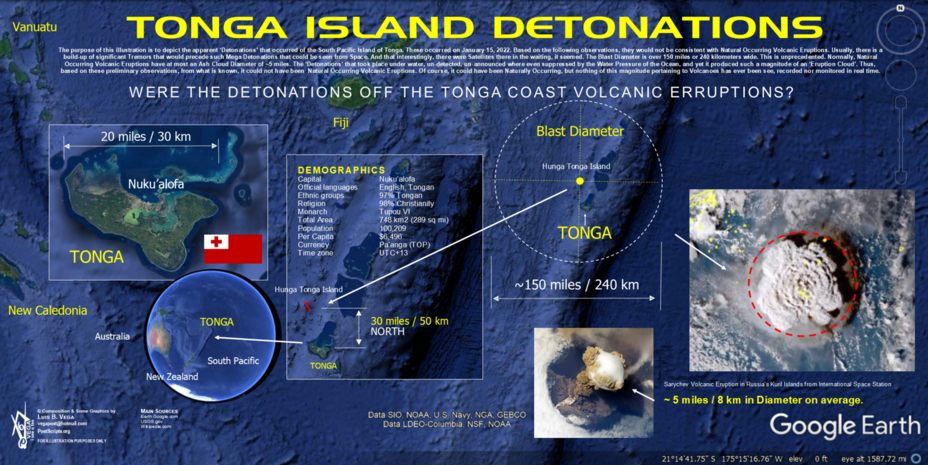 The purpose of this assessment is to depict the apparent ‘Detonations’ that occurred of the South Pacific Island of Tonga. These occurred on January 15, 2022. Based on the following observations, they would not be consistent with Natural Occurring Volcanic Eruptions, underground, by itself. Could, more-or-less the Underground Volcanic Eruptions have been as a result of a Detonation Device of some sort. Usually, there is a build-up of significant Tremors that would precede such Mega Detonations. This was not the case. The Volcanic Ash Cloud could be seen from Space. And that interestingly, there were Satellites there in the waiting, it seemed.

The Blast Diameter if the Volcanic Ash was over 150 miles or 240 kilometers wide. This is unprecedented. Normally, Natural Occurring Volcanic Eruptions have at most an Ash Cloud Diameter of ~5 miles. The ‘Detonations’ that took place under water, un-detected, un-announced where even suppressed by the Water Pressure of the Ocean, and yet it produced such a magnitude of an ‘Eruption Cloud’. Thus, solely based on these Preliminary Observations, from what is known, it could not have been Natural Occurring Volcanic Eruptions by itself.

Of course, it could have been Naturally Occurring, but nothing of this magnitude pertaining to Volcanoes has ever been see, recorded nor monitored in real time. Thus, based on a comparison of Natural Occurring Volcanic Blasts, these appear to not be ‘Normal’ nor Natural. One wonders if the Globalists are trying out their ‘Toys’ in preparation for what one knows is coming. The People of Tonga, and other Islands like Fiji have been the Victims of Nuclear Detonated Radiation Experiments. The People of the South Pacific have protested such Nuclear Detonations to this day against the French in Particular. One would ask, why this area?

From both a World Agenda point of view, one is of the believe that a Nefarious has been dual in application and outcomes. Since the Peoples of the Polynesian Nations are the tiniest and least protects and isolated, they stand no chance in averting such Nuclear Detonations. Tonga and other surrounding Islands have been heavily Evangelized by all those Missions Boards and Societies in the late 1800s and early 1900s. At one point, Tonga, albeit tiny had more Christians of any Country. So, not surprised they Detonated the ‘Devices’ there. To the Luciferians, wiping-out or sickening such concentrations of Christians on Earth is their desired outcome as well.

The resonating Shockwave has even disturbed all the Tsunami Buoys all across the Eastern Pacific Rim, from Japan to Alaska. But in terms of ‘Detonation’ of Test Weapons, the South Pacific has been the area most affected. Same thing happened with Hiroshima and Nagasaki. Of all places in Japan, these 2 areas had the most concentrations of Christians at the time. The Globalists chose these as they were at the 33rd Parallel and on August 6, then 3 days later on August 9. A 6-9, As Above, So Below construct.

In a Paper published by Okuyama Michiaki, as to the ‘Religious Response for the Atomic Bombing of Nagasaki’, he states, ‘Why did America finally drop the bomb on Nagasaki, the most Christian city in Japan? Nagasaki had no significant military Industrial Complex. That was the point. ‘They’ were not the ‘Americans’ but the former Nazi, Anti-Christian Scientists the CIA brought over to Los Alamos, New Mexico under the Operation ‘Paper Clip’. These were the Robert Oppenheimer’s of the World producing the ‘Toys’ for the Luciferian Globalist.

It is they that run the Nuclear Programs, own the Bombs, and make the Bombs as in General Electric in the USA. This corporation was started by Edison but was eventually bought-out by the New York Entities behind the Stock Market. Such Families of the World Oligarchy are still developing and detonating their ‘Toys’ for good measure. The following Reference will collaborate what one has just stated. And it has been the South Pacific that has been the area where they have traditionally detonated Nukes ever since.

As far-fetched as this assertion may seem, consider the following correlation in Timing. One knows, if a study into the Occult and Luciferian Playbook is understood, how they peg their Agenda and Play-Book moves based on Astronomical Occurrences like Alignments and Eclipses, but also in terms of Numbers. From the Spring Equinox of March 20, 2020 to the Tonga ‘Detonations’ is exactly 666 days. Mere coincidence? Perhaps, but one doubts it.

To reiterate, the Statements one has made is because one can say what one says with Confidence and backed by Research. One has mostly presented one’s own Opinions, but that is even substantiated by Evidence. At no point in time has one just opined without Knowledge. In this Tonga ‘Detonation’ write-up, one has made 3 Suppositions based on Historical Facts.

1st Supposition.
The Cities that were Atomically Bombed in Japan had the country’s highest concentration of Christians. Was that just coincidence? Given one’s Research, no. These 2 Cities were no significant Military Targets. In a Paper published by Okuyama Michiaki, as to the ‘Religious Response for the Atomic Bombing of Nagasaki’, he states, ‘Why did America finally drop the bomb on Nagasaki, the most Christian city in Japan? I asked the same and found out why and now know why.

2nd Supposition.
The Underground Volcanic Eruption in Tonga were and are unprecedented. And given the history of such Christian Populations being targeted, as even the Japanese have said, it is suspect that this has now also happened in Tonga. Well, it does not need to be ‘Atomic’. With modern Weaponry, the same outcome in terms of TNT Output can be achieved without any Radiation Fallout or Cloud. But since World War 2, such conventional Thermonuclear Tests have occurred in all of the South Pacific, by the USA and the French in particular. See the following quote about the Protocols. And this Policy is really on-going and is being protested to this Day.

‘In March 2021 a group of Researchers and Investigative Journalists from INTERPRT and Disclose released their findings on the health implications of the experiments. According to our calculations, based on a scientific reassessment of the doses received, approximately 110,000 people were infected, almost the entire Polynesian population at the time.’ - Tahiti protesters condemn French nuclear testing legacy

3rd Supposition
The 3rd Supposition is that given the Diameter of the Blast, for such a Volcano is unprecedented. If an average Blast Cloud diameter is 5-8 Miles wide, this one was 150 Miles wide, but you say to all this.

Most ‘average’ persons in hearing or reading about an ‘Underground Volcano Eruption would take as a non-event, especially if it is not affecting them directly. As they would say, ok, so what or ‘Oh Please’. Most are not grasping the scope if this Blast, which is all one has tried to do and illustrate it and speak to possible underlying, no pun intended Causality due to such a Grosse Outcome.

And is why one investigated and did a Blast Comparison. So, if People mean to say that such an Underground Volcano Blast, ‘Naturally Occurred’, that affected the entire Pacific Rim and did cause a Tsunami, although mild to even hit the coast of California, an ‘….oh please’ reaction? One would say back just the same, …’Oh Please.’ ​

For example, a claim was made by a website Global Research in early 2005, that the 2004 Indian Ocean Earthquake that produced the Killer Tsunami was a result of a Weapon’s Detonation. The Man who runs the Site is a Professor and stated that it was Israeli Frog-Men who implanted the ‘Bomb’ on the Earthquake Faultline. Those dismissing such a claim as nothing but the ‘Usual Conspiracy Theories’, said that it was or would be impossible for Men to dive that deep.

One is assuming they were in Free Fall ‘lines’ and not in some sort of Deep Dive Vehicles that can go down as much as 6 Miles deep. The point is that although the ‘Earthquake’ was recorded to have been triggered at a depth of 30 Kilometers, or 18 Miles, it is .33 the distance. And the Weapon had not needed to go that deep to trigger the Fault Line at just 12 Miles deeper.

But Global Research was not the only one or isolated Conspirators making this Extraordinary Claim. There were others that also came forward, independent of each other. There was Grid’s Digest, who on Sunday (21/3/2021), revisited the Nuke Detonation Theory. There was Jerry D Gray who wrote about this ‘Conspiracy Theory Paper, called Project Seal @knowledgethatyouneed on March 10, 2021.

In the Project Seal Article, it is stated that the Tsunami of 2004 was a result of a Superpower Engineering Thermonuclear Weapon for that specific purpose. To this claim, a Seismologist named Daryono revealed 7 Facts to refute this Extraordinary Claim. Daryono, served as the Head of the Earthquake and Tsunami Mitigation Division at BMKG.

He confirmed that there is some very strong Scientific Evidence that the 2001 Tsunami was triggered by a Tectonic Earthquake, but not triggered by a Nuclear Explosion as it has been asserted. But such Scientific Review is missing the Point. Once such a Weapon is Detonated, the Effects or Outcome will seem as a ‘Normal Underwater Seismic Event’. And that is the point of such Weapons.

According to Research, there are ‘Tsunami Bomb’. It is perceived that the Russians possess such Weapons. It has been around since World War 2. The Pentagon has looked into developing ‘Tectonic Weapons’. Why? When detonated, they could create destructive Tsunamis to cause severe damage to an Enemy. It is reported that the Project to develop such Weapons commenced after US Navy officer E.A. Gibson noticed Small Waves generated by Explosions used to clear Coral Reefs. The idea was developed by the United States and New Zealand Military. The Program Code named was called ‘Project Seal’. The Weapons Concept was deemed feasible, but then the Project went ‘Dark’. They made it appear that the Weapons themselves were never fully developed or used.
__________________________

Christians were Targeted with the World War 2 Atomic Bombs

Religious Responses to the Atomic Bombing in Nagasaki
https://nirc.nanzan-u.ac.jp/nfile/4258

Fiji has taken another Bold Step in the battle against Nuclear Weapons
https://www.theguardian.com/world/commentisfree/2020/jul/08/will-to-fight-together-fijis-latest-bold-step-in-battle-against-nuclear-weapons