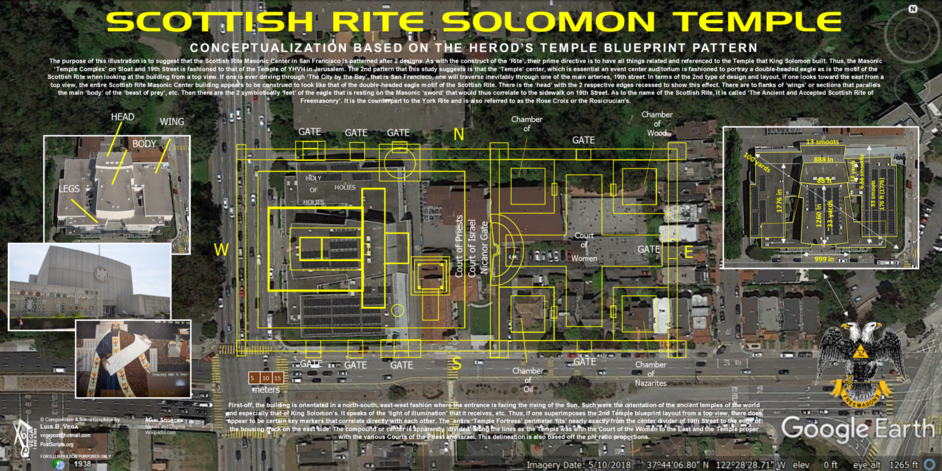 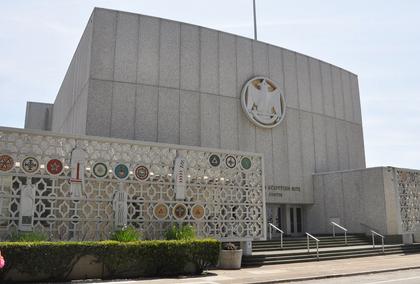 ‘The Masonic religion should be, by all of us initiates of the high degrees, maintained in the purity of the Luciferian doctrine. . . Yes, Lucifer is God, and unfortunately Adonay is also God. …The doctrine of Satanism is a heresy; and the true and pure philosophic religion is the belief in Lucifer, the equal of Adonay; but Lucifer, God of Light and God of Good, is struggling for humanity against Adonay, the God of darkness and evil.’  -A.C. De La Rive, La Femme et l'enfant dans la Franc-Maconnerie Universelle,

The purpose of this study is to suggest that the Scottish Rite Masonic Center in San Francisco is patterned after 2 designs. As with the construct of the ‘Rite’, their prime directive is to have all things related and referenced to the Temple that King Solomon built. Thus, the Masonic ‘Temple Complex’ on Sloat and 19th Street is fashioned to that of the Temple of YHVH in Jerusalem. The 2nd pattern that this study suggests is that the ‘Temple’ center, which is essential an event center auditorium is fashioned to portray a double-headed eagle as is the motif of the Scottish Rite when looking at the building from a top view. If one is ever driving through ‘The City by the Bay’, that is San Francisco, one will traverse inevitably through one of the main arteries, 19th street.

At the intersection of Sloat, there is a very prominent building on the 4-way intersection that looks very ominous with seemingly ‘Christian’ motifs that adorn the exterior façade on 19th Street. There are Maltese Crosses, Templar Crosses, Hexagrams with Hebrew lettering, etc. Then there is a double-headed eagle etched into the building. This study will consider the obvious and what is revealed and made to project outside in plain sight. Then the study will consider the esoteric nature of some of this possible meaning and significance of such a design and the origins of the Scottish Rite.

First-off, the building is orientated in a north-south, east-west fashion where the entrance is facing the rising of the Sun. Such were the orientation of the ancient temples of the world and especially that of King Solomon’s. It speaks of the ‘light of illumination’ that it receives, etc. Thus, if one superimposes the 2nd Temple blueprint layout from a top view, there does appear to be certain key markers that correlate directly with each other. The  entire ‘Temple Fortress’ perimeter ‘fits’ nearly exactly from the center divider of 19th Street to the edge of the housing track on the east side. The compound or center is apparently ‘divided’ along the lines as the Temple was with the Court of the Women to the East and the Temple proper with the various Courts of the Priest and Israel. This delineation is also based off the phi ratio proportions.

The Sacred Measurements
Interestingly, the Court of the Women corresponds to an open area of playing courts that the school compound there is associated with the Lutheran Church. At each corner, of this church compound section, there are certain builders that would then correlate to the 4 champers within the Court of the Women; that of the Lepers, the Wood, the Oil and the Nazarites. What is further interesting is that the delineation of the Scottish Masonic Center and the Lutheran Church would appear to line up with the main ‘Temple’ Lutheran Church building itself. The actual church building would be apparently the length of the Altar of Sacrifice ‘ramp’. The Altar of Sacrifice itself would be situated nearly on ‘top’ of where the Lutheran Church ‘Altar’ would be at the end, inside of the Nave. Then the ‘steps’ leading up to the Temple Porch is nearly the distance from the edge of the Masonic Center building entrance to the first delineation in the structure.

Then the Masonic Center ‘Temple body’ is nearly the same distance as would be the Temple in King Herod’s model inner chambers having each respective Temple’s ends terminate at the 19th street’s edge. The inner portions would constitute the Holies and Holy of Holies. Such ‘chambers’ would span the core of the Scottish Masonic Center building that is essential an auditorium for various types of meetings, gatherings and performances. Obviously, inside the Scottish Masonic Center ’Temple’, one will not find the exact dimensions of a 20x20x20 cubits of the perfect cube Holy of Holies or the 20x40 cubits Holies. One will find the tapestry and artwork on the various wall panels throughout the Masonic building. It is replete with the drawings of King Solomon, Temple blueprints and esoteric motifs of the Scottish Rite persuasion of Freemasonry. The following is the approximate measurements taken from Google Earth that characterizes the Scottish Rite Masonic Temple with their many encrypted numerology symbolism. This is from a top view and with an east-west orientation to the building.

In terms of the 2nd type of design and layout, if one looks toward the east from a top view, the entire Scottish Rite Masonic Center building appears to be construed to look like that of the double-headed eagle motif of the Scottish Rite. There is the ‘head’ with the 2 respective edges recessed to show this effect. There are to flanks of ‘wings’ or sections that parallels the main ‘body’ of the ‘beast of prey’, etc. Then there are the 2 symbiotically ‘feet’ of the eagle that is resting on the Masonic ‘sword’ that would thus correlate to the sidewalk on 19th Street. As to the name of the Scottish Rite, it is called ‘The Ancient and Accepted Scottish Rite of Freemasonry’. It is the counterpart to the York Rite and is also referred to as the Rose Croix or the Rosicrucian's.

A Luciferian Rite
Supposedly, the Rite, ‘builds upon the ethical teaching and philosophy’ of the Craft or that of the Blue Lodges of Freemasonry. Their symbol is the double-headed eagle motif that is perched on a Masonic sword and has the number 33 within a triangle on the breast of the eagle. The number stands for the 33 degrees that are known to exist, publicly. The other prominent motif is the Rose and Cross within the Compass of the Masons that also depicts a pelican with younglings. For example, such a ‘pelican’ motif is the symbol on the flag of the state of Louisiana in the USA. There is much debate as to the origins of the Rite that involve such personages as the ‘myth of Stuart Jacobite’, King Charles II of England, and German noblemen, etc. It is believed that the first inception of the order was brought-over by the French in what is now Haiti.

Although the order would be considered ‘Christian’ in its veneer, there have been Jews and Jesuits that have influenced and led the Rite at various times. Interestingly, the ‘Mother Lodge’ in the Western Hemisphere is situated in the Supreme Council at Charleston, South Carolina. And this Rite is heavily influenced by the Kabbalist Jews that have their ‘Craft’ going back all the way to Nimrod of the Tower or ‘Temple’ of Babel. What many may not suspect nor consider is that such motifs and leaders have not been ‘Christian’ nor have had anything to do with Jesus as the true Christ and His Gospel of Salvation. Albeit, the Freemasons believe in a ‘Christ’, a Deity and Creator, the ‘Grand Architect of the Universe’, it has not Jesus nor YHVH of the Bible.

This assertion is stated and established well within the Albert Pike writings of the Morals and Dogmas. Pike basically codified the ‘Rites’ and essentially defined that their ‘religion’ is that of Lucifer. To the Freemasons, Lucifer is the true ‘God’ and that YHVH is the evil imposter. It is Albert Pike and others like Manly P. Hall that later on confirmed that indeed this ‘religious order’ is Luciferian and Lucifer is the God whom they worship.  The Rite such as this one and any other affiliated Order might  have the vestiges of being ‘Christian’ but that would be a falsity. However, such Rites and Orders have infiltrated and coopted many of the mainline Christian churches, such as the one in which the compounds of the Scottish Rite Masonic Center are situated within. It is the Lutheran Church and school that are linked to this Rite.

Such Freemasonic association, by the way that is forbidden by the Apostles in the writings of the New Testament. Rather, that Christians are to expose ‘False Brethren’ and the false ‘Ministers of Righteousness’ that are masquerading as such. The Apostle Paul in 2 Corinthians 11 stated the following regarding such ‘Rites’. ‘For such are false apostles, deceitful workers, transforming themselves into the Apostles of Christ. And no marvel; for Satan himself is transformed into an Angel of Light. Therefore, it is no great thing if his ministers also be transformed as the Ministers of Righteousness; whose end shall be according to their works.’ One of the Rite’s main aim is to complete their ‘Great Work’. This ‘Great Work’ is to enthrone Lucifer one day in Solomon’s Temple in Jerusalem. Many believe this will concur with the rebuilding of the Jewish 3rd Temple that will be eventually coopeted by the Luciferians for the purposes of enthroning their false Messiah. It is to be the New World Oder Temple for the coming King Solomon type that will rule the world from Jerusalem.

It will be a time on Earth of Humanity’s last generation in which the ‘Pure Doctrine of Lucifer’ will be the New World Religion that will have coopted Judaism with as it has now with its Kabbalistic Wizards sand Warlocks. This ‘Supreme Council’ is none other than a rendition of the Sanhedrin that sough and still seeks to ‘kill’ Jesus, the  true Messiah of Israel and the King of this world. As the Rapture of the Bride of Christ occurs and leaves a spiritual vacuum, there will be a crisis within the apostate Christian churches left behind. And with the destruction of the 3rd World War as designed by Albert Pike, the ‘Political Zionist’ will prevail over Islam.

This in turn will lead to the present rendition of what Judaism has become, a coopeted Kabbalistic version of Lucifer’s ‘Rites’ and ‘Order's since Babylon with the Tower of Babel and the 1st Masonic King, Nimrod after the Flood of Noah, etc. This coming AntiChrist will be the ‘Last Nimrod’, Biblically speaking in that he will once again seek to unite the world against the one and only true GOD, YHVH and Jesus Christ. It will be through a ‘Temple’, that is the 3rd Temple in Jerusalem from where this New World Temple and religion will emanate from.
__________________________