#160:
​4-FOLD GOSPEL OF COSMOS
THE SHEPHERD OF THE SHEEP
Keeper of the Silver Gate of Man

Jesus used this figure of speech, but the Pharisees did not understand what he was telling them. Therefore Jesus said again, “Very truly I tell you, I am the gate for the sheep. All who have come before me are thieves and robbers, but the sheep have not listened to them. I am the gate; whoever enters through me will be saved. They will come in and go out, and find pasture. –John 10:7-9

The purpose of this study is to show that the cosmic storyline that is centered on the Silver Gate is an abbreviated synopsis mirroring the 4 Gospel of the Bible. This study suggests that the segment is a timeframe and dispensation of the redemptive plan of Jesus Christ worked out in space and time. The storyline of the Mazzaroth or Zodiac can be summed up in this quadrant centered on the Silver Gate or Gate of Man. Each constellation is attributed to one of the 4 main cosmic quadrants that reflect the 4 works of Jesus Christ. It was Jesus who came to execute the Plan of Redemption by being humbled to incarnate as a human, fully the Living GOD and man.  The inference to Christ depicted in the 4 constellations is taken from the Biblical interpretation of the research and work done by E.W. Bullinger.

The Bible states in the New Testament that Jesus was ‘slain since the foundations of the world’ in Eternity Past. Jesus stated that He is the Living GOD that is the Good Shepherd and that He is the Gate of the sheep. Jesus is the Gate Keeper and gave His life for the Sheep through His crucifixion. As the Son of the Creator He allowed Himself and willingly chose the will of the Father to be humbled to be born a human, as a Shepherd to die for the human race. This was part of the plan for Jesus to die for the sins of Humanity, was buried and resurrected, conquering sin, death, and Lucifer. His death would justify the sin of Adam’s fallen race. When Jesus walked on Earth, He truly was the Shepherd King as His earthly father King David was.

This characterizes the notion that Jesus had a similar heart in that it was given to the issues of the LORD or ‘after GOD’s own heart’. As noted, currently, the present dispensation of prophetic time deals. It is Jesus that is officiating as the Judge evaluating His Church, the 7 Maidens as in the Pleiades or the Menorah as Jesus is depicted in the book of Revelation. To reiterate, the Church Age has thus 7 segments of prophetic time before Jesus as the Orion, the Redeemer will come back to Earth. Perhaps Jesus will come through the very Silver Gate at the point of the Resurrection and Rapture of the Bride. Jesus is presently functioning in the office of Priest as He is mediating between the redeemed sinners and the Father. He is also the Advocate on behalf of the Bride that is being accused by Satan or Lucifer before the Judicial Court of Heaven. The name Satan means the accuser or adversary.

Lucifer is not in Hell currently but still has in a mysterious way legal access to this place of accusation. However, Jesus as the Judge is interceding as a lawyer on behalf of the Church and consequently not judging His Church but evaluating it. As noted, it is an evaluation unto approval through the refinement process that will involve suffering and persecution. Did not the Apostles warn that ‘all those that seek to live a godly life will be persecuted? The Church has been allowed to go through tribulation and suffering that most often also involves persecution but not the ‘indignation of the LORD’ as taught in the book of Revelation. Tribulation, persecution, and suffering have characterized the 7-fold Church Age since Pentecost. Students of the End of Days must understand however that the Bride was not promised an ‘escape door’ from tribulation, persecution and suffering but from the ‘indignation that is to come on the inhabitants of the world’.

In fact, the LORD has used suffering, tribulation, and persecution to refine the Bride with. This coming condition upon the world of the Lamb’s indignation has not occurred thus far. However, it will be at that point in time when it does happen that the Bride will be corporately removed through the ‘escape hatch’ out of this world; through the Gate of the Shepherd and Gate Keeper. Until that time, it is through this process of tribulation, suffering and persecution that Believers are being sanctified or set apart spiritually. The agent is the Holy Spirit ministering through the renewing of the Word of YHVH, the Bible. Jesus keeps with the typology of the Bull in that He came to serve.

He became as a servant as Jesus even washed the feet of His Disciples. As Jesus stated to the Apostle Peter and of the rest of the Apostles, minus Judas, ‘you are all clean’. It was only the parts of the body that get ‘dirtied’ that need to be constantly cleansed. This takes volition on the part of a Disciple of Jesus to come to the Intermediary, the ‘Advocate with the Father’ for this continual cleansing because one is still in the mortal and corruptible body of flesh. The physical body of the Followers of Jesus will one day be rejuvenated and transformed. This is what will be the next prophetic event to happen as promised. This event is referred to by many as being the point of the resurrection and Rapture of the Bride at the end of the Church Age. The next dispensation of prophetic time will commence with the last week of Daniel’s prophetic week of years.

This time will be needed to also complete the redemption of national Israel from the Levin of the Synagogue of Satan and the rejection of Jesus as the true Messiah. It will metaphorically be a time as it was with the wrestling of Jacob who had to be humbled and totally surrendered to the LORD, devoid of any more rebellion.  The subsequent time will encompass the 1000-year Millennial Kingdom on Earth from the Earthly Zion, in Jerusalem. As noted, the redemption of the bodies of the Believers in Jesus will come at the point and time of the Rapture event. It is the process that is next in the prophetic timeline to consummate the Plan of Redemption, which is the glorification of the body. This will be essential as flesh and blood cannot habit Eternity. The new bodies will be united with the already redeemed spirit and soul of a Disciple of Jesus. The glorification will also allow the Bride of Christ to co-rule and reign with Christ on Earth for the millennial period of 1000 years. This is before Jesus makes all things new. This scenario will start to occur as some interpret the Bible after the Battle of Armageddon.

The Bride will be those that the kingdoms of this world and of the Principalities of the Powers in the Air are given over to the Saints in Glory. According to the Bible, it will be at the end of the Millennial Reign of Christ that Lucifer will be let loose one last time to gather those opposed to Christ. Lucifer will finally be cast into the Lake of Fire but only as he attempts one last rebellion and assault against Jesus Christ and the earthly Zion in Jerusalem. Subsequently, the Great White Throne Judgement ensues and after all ore cast likewise to the Lake of Fire following the ways of Lucifer, Jesus will make the New Heavens and New Earth. This will be accompanied by the superimposed New Jerusalem prepared as a Bride. It will be after the Millennial Reign of Christ on Earth that the new state of Eternity Future will be created and entered into.

The Universe and all that is seen and not seen will be under the complete authority of Jesus. This time there will be at least 2 factors that are different since the creation of the prior universe as one understands it. In one sense, there will be no rebellion, no Lucifer to tempt and introduction any more conspiracies of deception and lies to derail Humanity and the Creation with. Also, there will be a co-heir to the Throne of the Son of GOD in that a ‘wife’ as in a companion to Christ Jesus in some mysterious way will share all that Jesus is and has. This is seen in the typology of Gemini in that the original was a couple, a man and a woman holding hand as lovers do. The following are the 4-fold Gospels of Christ’s redemptive work as depicted in the 4 constellations centered on the Shepherd’s Gate, the Silver Gate of the known Cosmos.

To reiterate, the typology of the prophetic significance of the 4 constellations are at the core of the cosmic celestial Gate of Man or the Silver Gate. They are echoing the creation in the Garden of Eden and ending with the new Garden of Eden to come in which Jesus and His collective Bride of Believers will be as Adam and Eve for all that is to come. It will be a state of exaltation however not much is written about this time only some hints as the Apostle Paul stated that ‘no eye has seen or thought entered the mind of what YHVH has in store for those that love the LORD and are called according to purpose for which he purposed in Christ Jesus.’
________________________ 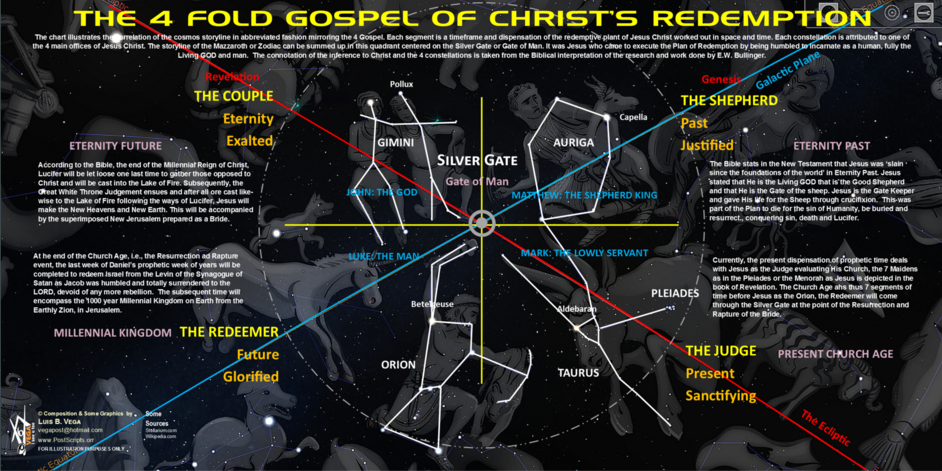