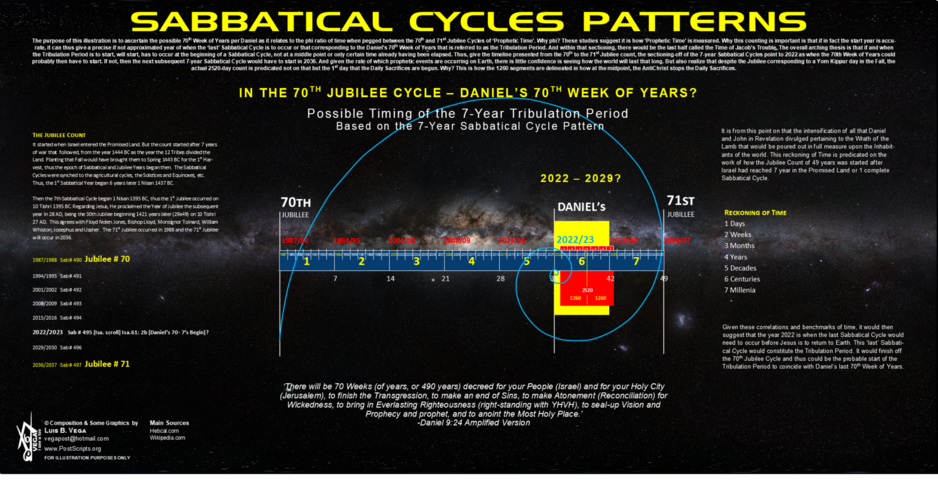 ‘There will be 70 Weeks (of years, or 490 years) decreed for your People (Israel) and for your Holy City (Jerusalem), to finish the Transgression, to make an end of Sins, to make Atonement (Reconciliation) for Wickedness, to bring in Everlasting Righteousness (right-standing with YHVH), to seal-up Vision and Prophecy and Prophet, and to anoint the Most Holy Place.’ -Daniel 9:24 Amplified Version

The purpose of this study is to ascertain the possible 70th Week of Years per Daniel as it relates to the phi ratio of time when pegged between the 70th and 71st Jubilee Cycles of ‘Prophetic Time’. Why phi? These studies suggest it is how ‘Prophetic Time’ is measured. Why this counting is important is that, if in fact the start year is accurate, it can thus give a precise, if not approximated year of when the ‘last’ Sabbatical Cycle is to occur or that corresponding to the Daniel’s 70th Week of Years that is referred to as the Tribulation Period. And within that sectioning, there would be the last half called the Time of Jacob’s Trouble, etc. The overall arching thesis is that if and when the Tribulation Period is to start, it will start, has to start at the beginning of a Sabbatical Cycle, not at a middle point or after a certain time has already elapsed.

Thus, give the timeline presented from the 70th to the 71st Jubilee count, the sectioning-off of the 7-year Sabbatical Cycles point to 2022 as when the 70th Week of Years could probably then have to start. If not, then the next subsequent 7-year Sabbatical Cycle would have to start in 2036. Of course, the theory could be wrong. But given the rate of which prophetic events are occurring on Earth, there is little confidence is seeing how the world will last any longer. But also realize that despite the Jubilee corresponding to a Yom Kippur day in the Fall, the actual 2520-day count is predicated not on that but the 1st day that the Daily Sacrifices are begun. Why? This is how the 1260 segments are delineated in how at the midpoint, the AntiChrist stops the Daily Sacrifices.

This is the key to the Tribulation Period in one’s opinion. It is from this point forward that the intensification of all that Daniel and John in Revelation divulged pertaining to the Wrath of the Lamb that would be poured-out in full measure upon the Inhabitants of the world. This reckoning of Time is predicated on the work of how the Jubilee Count of 49 years was started after Israel had reached 7-year in the Promised Land or 1 complete Sabbatical Cycle. To reiterate, this Jubilee benchmark of time, it would then suggest that the year 2022 is when the last Sabbatical Cycle would need to occur before Jesus is to return to Earth. This ‘last’ Sabbatical Cycle would constitute the Tribulation Period. It would finish off the 70th Jubilee Cycle and thus could be the probable start of the Tribulation Period to coincide with Daniel’s last 70th Week of Years.

Within the 70th Jubilee Cycle
This supposition is based on how the Tribes of Israel divided the Promised Land in 1444 BC. But they first had 7 years of war with its Pagan Tenants that YHVH instructed them to evict.  Leviticus 25:3 states, ‘6 years thou shalt … gather in the fruit thereof’.  Only then could Israel have planted crops in relative peace and security. Thus, the Jubilee and Sabbatical count would have begun in Fall Season of -1437/-1436 being Sabbatical Cycle # 1 and by subtracting 7 years from -1444. One is taking on a best education and/or Biblical guess as to when the Jubilee Count starts. This will either determine the trajectory as being accurate or not and off-base. For example, according to the Essene Calendar, the last Jubilee before the Messiah is to appear around 2025.

This would put the timeframe just before ‘the midst’ of the proposed 7-year Tribulation Period, estimated to be from the Fall of 2022 to the Fall of 2029. It would though appear to coincide with the ‘midst’ wherein the AntiChrist would debut and reveal his true nature, that being Lucifer in the flesh, mimicking Jesus’ incarnation. Jubilees are proclaimed on the 10th day of the Jewish 7th Month (Leviticus 25:8-12), better known as Yom Kippur. For the timeline illustrated, the 70th Jubilee would correspond then to the 7-year Sabbatical Cycle of 1987/88. The 1st year would be the 49th year count and the subsequent year would be the actual Jubilee Year count. Then 49 years later from 1987 would be the 71st Jubilee starting in 2036/37 and son on. This is of course using the Western or Gregorian Calendar reckoning of Time. The Jewish years overlap.

One has to realize that the Sabbatical Cycles are based on a 12 months count of 30 days each, which would equal 360 days. This Prophetic Count gives then the span of a Sabbatical Cycle as being a constant 2520 days long with halves of 1260 days, respectively. This interpretation is confirmed on 2 occasions in the book of Daniel and Revelation. What is rather significant, mathematically is that when the timeline is measured out from the 70th Jubilee to the 71st Jubilee, the Center Year is 2011. This would constitute the 7 cycles or 7-year Sabbaths for a total of 49 years.

However, if one applies the phi ratio spiral for effect, from end to end, the corresponding nexus point would be 2022. Is this significant? Well, only that it perhaps confirms that the year 2022 is when the next Sabbatical Cycle of 7-years is to begin. And that knowing this correlation, perhaps the 70th Cycle of Jubilees corresponds with the 7-years of the 70th Week of Years per Daniel that appear to synchronize then. But one is using the Western Gregorian Calendar delineation of time counting. The actual 7-year Tribulation Period is based on a 2520-day count as mentioned before and the beginning of the Daily Sacrifices may very well start on a Jewish Feast in the Fall.

From the Daily Sacrifices
This would usually then correlate to the traditional Feast of Yom Teruah or of ‘Trumpets’ as the beginning of the Civil Year, not the Religious Year that occurs in Nissan. Furthermore, the Daily Sacrifice could start perhaps at the very end of the Fall Feasts of YHVH, that to correlate with the Feast of Shemini Atzerets for example. It is the 8th Day of Assembly and the ‘last’ day memorializing the reading of the Law by the King to all the assembled Congregation of Israel. Will this occur when the coming False AntiChrist Messiah that will allow the Jews to build their 3rd Temple? Will he then take this place and dedicate the start of the Daily Sacrifices in the presence of a gathered multitudes, especially the reconstituted Sanhedrin or Council of the 70 Elders of Zion?

Mind you, this is the same Supreme Religious Council of men that rejected Jesus as the true Messiah and of whom Jesus exposed and warned that they would accept one who would come in “His own Name’, etc. In one prior Study/Article, it has been shown that if in fact one uses this last day of the Shemini Atzerets Assembly and counts the 2520-days from that point forward, the midpoint of the Tribulation or the 1260th day would fall on April 1, 2026, which would be Passover.

And what better Feast of YHVH than to stop the Daily Sacrifices of the Lambs and then to have the AntiChrist then defile the 3rd Temple by entering in and sitting on the Ark of the Covenant. It will be brought out for the Temple as the center piece of which the AntiChrist will rally the world as the symbol of the new Luciferian Law and Order that will guarantee that supposed 7-year Confirmation of the Covenant. But only to tb broken at the midpoint when Lucifer, indwelling the AntiChrist will from that point forward demand absolute worship. This is the time when the Mark of the Beast will be required.

Economic Resets
Given the pattern, it should be noted that an underlying theme and context of these 7-year Sabbatical Cycles is based on economics. It is a system of Financial Resets. Is there some evidence in recent times that can lend some credence to this supposition? Well, Biblically, the Sabbatical Cycles were based on the Agricultural Cycles and of the Jubilees when debts were cancelled and there was a ‘Biblical Reset’. It also involved the items of land, property and assets, etc. What has happened in modern times is that dealing with various monetary systems, it is about a systematic dismantling of the worldwide currencies to make way for the eventual Mark of the Beast one. The aim is to make a One World currency eventually and how a Global Governance will be contingent upon having a 1 worldwide Digital Wallet Currency. Now if that currency will be Digital or Crypto or within a Block Chain, it will most likely be. As to the 7-year ‘Economic Resets’? For example, in 1997, there was a U.S. Stock Market Crash.

Why start with the U.S. Stock Market? It is because up to now it is a prominent Market that is ruling and regulates all others in the world of the Nations. But this will be for the time beings as many suggest the coming Economic Reset will see the USA implode to make way for the AntiChrist’s System. Is there evidence of this plan occurring? If one counts-off 7 years from 1997 as mention, the Sabbatical Cycles emerge and are very revealing and confirming. This has been the historical ‘Economic Reset’ cycles thus far that coincide with the Biblical timeline. Is it mere coincidence? Not likely: 1997-2001-2008-2015-2022, etc.

Thus, this is why, as noted that if and when the coming and anticipated 7-year Tribulation Period is to begin, it has to begin at the beginning of one of these Sabbatical Cycles that are really Economic Resets. Thus, based on the Jubilee count since Israel entered the Promised Land, this is why the year 2022 is calculated to be the beginning of the next Sabbatical Cycle Pattern. Of course, if the count has been correct since -1437. It is the year that is supposed to have started the ‘clock’ of the subsequent 7-year Sabbatical Cycles from that point. Again, of course, one could be wrong and the year could be off, in which, then there is yet a year for the Tribulation Period to be determined through further study and interpretation.

Now, could there also be a subsequent 7-year Sabbath Cycle after Jesus comes back to complete the 49th one and fulfill the ‘Last Jubilee’ before the Millennial Kingdom starts? This could be a possibility as one does not know nor does the Bible teach how much of a time gap there will be from Jesus’ return to when the Millennial Kingdom is to start. This would make sense if for example, one considers that during the Tribulation Period, it states that when the Ezekiel War finishes, the burning of the weapons of the invading armies will take 7 years to dispose of. In fact, Israel will use the weapons to harness its energy. Could it be that before the Millennial Kingdom is established, 1 cycle of a Sabbath Cycle could elapse that would mirror the Creation Week and be that literal Sabbath Rest as it would correspond to the 7th Day and thus the 7th Cycle to complete the 71st Jubilee then? Prophetic Time will tell.
_____________________ 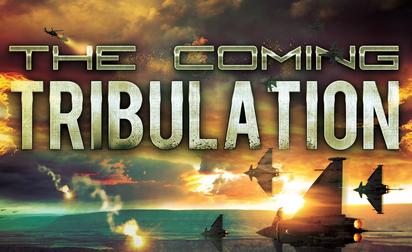