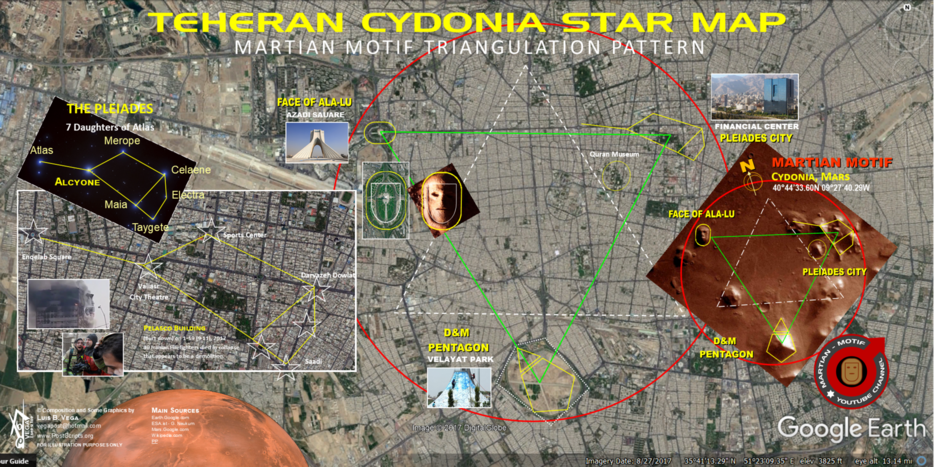 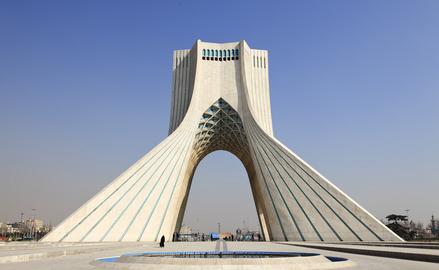 ‘But the Prince of Persia was withstanding me for 21 days; then behold, Michael, one of the Chief Princes, came to help me, for I had been left there with the Kings of Persia. Now I have come to give you an understanding of what will happen to your People in the Latter Days, for the vision pertains to the days yet future.’ – Daniel 10:13-14

The purpose of this study is to present the evidence that the city layout of Teheran, Iran is set to the Cydonia, Mars ley-lines. The mysterious pyramid complexes of Cydonia, Mars have perplexed researchers, scientists and ley-people alike. Many believe that Mars at one time had a thriving advanced civilization with an atmosphere that sustained life. Now what that ‘life’ looked like or was or is still is up for debate. With the advancement of technology and the sending of Mars Probes and Rovers, there has come to surface many unexplained anomalies that do suggest a residual destruction of that civilization and atmosphere. In particular, the site named Cydonia, Mars has an array of amazing precise mathematical alignments and ley-lines that cannot be explained nor coincidence.

Furthermore, the remnants of certain geometric structures strongly suggests that this complex had pyramids based on the Pleiades pattern and enveloped in a hexagram layout. Pertaining to the Cydonia, Mars anomalies, there are 3 main pyramid structures that comprise the Martian Motif. There is the famous Face of Mars, the giant Pentagon Fortress and the Pleiadian Pyramid City. These 3 structures triangulate each other and would make up the core of a large metropolitan city on Earth. What is astonishing is that such a Martian Motif is seen implemented in the architecture of almost all the ancient civilizations on Earth. This started, at least based on the archeological record after the Flood of Noah with Babylon and Sumer.

It was the Sumerians that wrote about this connection and astonishingly knew about such a ‘Face’ structure or Temple that was a mausoleum to the fallen King of Nibiru. The Sumerians attributed the creation of humans to the ‘Gods that came from the Stars’. Such recorded the accounts that were sensationalized by Zecheria Sitchin in his Earth Chronicles books. The theory states that the ‘winged god’ from a planet called Nibiru was losing its atmosphere due to the effects of the Giant Dwarf that it was/is revolving around. Only gold particulates sprayed in the atmosphere could shield them and protect their atmosphere. In a political plot due to arguments or the succession of the Throne, Ala-lu fled with a celestial starship. This starship had nuclear weapons of mass destruction, unawares to Ala-lu and he navigated through the Asteroid Belt and located Earth that a comparable atmosphere.

He discovered mass gold deposits and relayed the message back to Nibiru. Long story short, he was granted clemency and rulership over Earth, the King. A weigh station was set up on Mars and other points along the Solar System as the gold was transported back to Nibiru. Later one the Anunnaki, as they were called rebelled as workers due to hard working conditions and the ‘gods’ decided to create humans for the purpose of servitude. Consider that the Sumerian knew before telescopes where invented the number of planets in the Solar System and apparently, such is the alternate ‘Genesis’ account of Creation that parallels the Bible. It is astonishing that for example, there is evidence that a huge mining operation existed in North America. There have been found numerous artifacts such as coins, writings from ancient paleo-Hebrew and Egyptian type of hieroglyphs. Apparently the world was more connected then.

However, at some point in time the destruction of not only Mars but the Earth occurred. Some speculate that it was the flyby of the 2nd Sun system, Nemesis that destroyed Atlantis, etc. How the Martian Motif is tied to the ley-lines of ancient cities, temples and structures is that perhaps the lost knowledge and connection of the Martian civilization was conveyed to the few and selected ‘priestly’ class on Earth that constitutes the Secret Societies, etc. This special class of humans are perhaps tasked at keeping the legacy and lifeline operational as even now in the modern era, the same Cydonia, Mars motif is incorporated into the major capitals of the world of which Teheran, Iran is another one of them. The Martian Motif that is basically encrypted and hidden in plain sight speak to the powers behind the curtain of those that really are the masters of the world.

Biblically speaking, such are the instruments and pons of the ‘Fallen Ones’ or the Fallen Angels that are masquerading as the ‘Creator God’s or ‘Ancient Alien’ Gods that seeded Humanity and are about to come back as they promised to save Humanity from itself. It is rather interesting that these 3 aspects of the Martian Motif incorporated the necessary institutions of power that will and do control the masses. There is the Military, the Financial and the Social-Political aspects of how the ley-lines triangulate each other. The Pleiadian Pyramid City is usually associated with the financial centers of modern cities that astonishingly will have 7 major towers or skyscrapers. Each of the 7 towers or structures corresponding to the 7 Stars of the Pleiades. Usually the core stock exchanges are there. In the ancient world, such a pattern usually corresponded to a royal palace that ruled monetary and social-political affairs.

In the medieval period, such a pattern corresponded to churches or temples of worship. In the case of Teheran, the Pleaides Pattern corresponds to the old Financial Center. The various points of the Star correlations correspond to traffic circles for the most part. It is rather interesting that this sector of the city is where the embassies of the major Superpowers are situated, Russia, England, Germany, etc. Out of all the circular round-abouts, there was one 1 building that corresponded to the Maia Star of the Pleiades. This was the famous Palasco Building. It was built in the 1960 and was the tallest building at that time. On January 19, 2017 it burnt down to the ground. What is rather peculiar about the unfortunate incident is that as the building collapsed, 30 Iranian Firefighters perished.

If one views the event which was videoed from different angles, it appears that the building was demolished much like the World Trade Center Towers. Some have pointed out that it is odd that January 19 or 1-19 is a 9-11 backwards and see the same ‘blueprint’ of taking a building down. Now for what purpose or date or ritual, that remains a mystery and to some, a conspiracy still.  The Giant Pentagon Fortress of the Martian Motif corresponds to the Velayat Park in the southern section of Teheran. From a top view, the ‘pentagon’ geometric shape might not seem that precise but if one is keen to pick on the ley-lines, there are 5 sides. There is also amazingly an ‘X’ that is designed in the open air area that astonishingly approximates the angles of the pentagon geometry. In most other cases, this area in ancient times did correspond to a military fortress of some time.

In the modern era, this Martian Motif has been replaced by hippodromes, especially in South American or other geometric structures or configuration in the street ley-lines. The center points is toward the north as the triangulated Cydonia, Mars pattern is approximately rotated horizontally 180 degrees. Amazingly, this is the same depiction as that of Santiago, Chile that faces north, just as it is on Mars. The 3rd component of the Cydonia Martian Motif is that of the famous Face of Mars or that of Ala-lu. In reference to the Sumerian account of Creation. Due to continued strife among the ‘Gods’, the Son of Anu back in Nibiru was sent to Earth to be co-ruler. This was Enlil. The political situation got to the point that Enki, as some would call him Ala-lu was banished to Mars where he was said to have died and a mausoleum was erected in his hour to look like his face.

Many have come to correlate this ‘God’ of Mars to All-ah or the Moon God of the Muslims. In modern times, this Martian Motif has usually been encrypted by giant sports stadiums. The overwhelming evidence of such a Martian Motif that is found in nearly every modern capital of the world begs an explanation. This study strongly suggests that the continued ‘Priestly’ class within the world’s various Secret Societies for example will never divulge their true identity and purpose because it is nefarious and Luciferian. The Bible clearly teaches that in fact, Fallen Angels did once inhabit the Earth and Lucifer was King over them. In Genesis 6, the account of a subsequent time arouse where some of the Watchers or Fallen Angels fell and took human women.

The result was the race of evil giants that were of the ‘Mighty Men of Old’ and mythology. The Bible teaches, as well as the book of Enoch that such entities will cross over and re-introduce themselves as the long awaited ‘savior’ Aliens from other planets or Stars. In fact they are not inter-planetary but inter-dimensional being, Fallen Angles in league with the Rebel King, Lucifer that is currently the ‘God of this World’. He is set to use Humanity against itself by way of a false promise of immortality and becoming ‘gods’ to thwart the coming of the true King, Jesus Christ.  The Luciferian ley-lines of Teheran, Iran are just another signature of the Fallen Ones that have marked their territory in honor of Ala-lu or Allah. What more appropriate place than to have such a spiritual stronghold as it is the seat of the very Prince of Persia, the Fallen Angel that is over this capital city, nation and empire.

It was this Persian Prince that battled against the Arch Angel Gabriel when attempted to deliver a reply to the Prophet Daniel’s prayer in Susa, Iran, etc. The Bible teaches that one day, the King of the Titans, Apollyon will be let loose on Earth from the opening of the Bottomless Pit and no doubt the Prince of Persia will be there ready to battle the Arch Angel Michael and his Holy Angles.
____________________________