#248:
JUPITER’S RETROGRADES
AN ENCRYPTION OF THE CHRIST
A Prophetic Pattern Comparative Study

‘I Jesus, have sent My Angel to give you this Testimony for the [7] Churches. I Am the Root and the Offspring of David, the bright Morning Star [Venus].’ -Revelation 22:16

The purpose of this study is to ascertain the number of time cycles the ‘King Planet’ or Planet of the Messiah, of the Christ -Jupiter has had its retrograde in the ‘womb’ of Virgo since the start of the Church Age. The total count would be approximately 24 times since Jesus’ crucifixion. This coefficient suggests a factor of 24 as in the number of hours in a day that correlates to a completion of a time segment. Interestingly, Jupiter has 12 retrogrades, approximately 1 in each of the Signs of the Zodiac or Mazzaroth. Moreover, if one factors-out 24, it is 8 x 3 or an encoded 8-8-8. It so happens that in Gematria, which is the study of numbers, it is the value of the name for Jesus. The number 888 represents Jesus, or more specifically ‘Christ the Redeemer’.

This 8-8-8 representation is construed by counting the letter values of the Greek transliteration of Jesus' name. For example, it would be in opposition to the value of the number 6-6-6, which is ascribed to the coming AntiChrist. For astronomical context, Jupiter takes nearly 12 years to orbit the Sun, so this is the period with which Jupiter moves through the 12 Zodiacal constellations. If one has taken basic Astronomy 101, one will learn that the Sun is in each of the ‘Houses’ for approximately 1 month, thus the 12 Signs of the Zodiac or Mazzaroth in Hebrew. Therefore it takes 12 month or how long the Sun and Jupiter takes to traverse the whole sky from Earth’s perspective. As noted, Jupiter has 12 retrogrades in about 1 year throughout the Sign constellations.

However, once every 83 years, Jupiter goes into retrograde, precisely in the ‘womb’ of Virgo. In 2017 the retrograde of Jupiter appears to be synchronized with the rendition of the Revelation 12 Virgo Sign ‘rehearsal’. What is unique in 2017, unlike the other 23 retrogrades in the ‘womb’ before concerning this time cycle is that the retrograde of Jupiter in the ‘womb’ of Virgo is in conjunction with the Moon and the Sun, a comet and an alignment of 3 planets. To reiterate, if one factors how many times Jupiter has had its retrograde in the ‘womb’ of Virgo since Jesus’ crucifixion to 2017, the total count would be approximately 24 times or (8 x 3). Thus could the planet Jupiter with 24 occurrences hint at another facet of its prophetic correlations to the coming of the Christ, the Messiah that the planet is attributed with? In Greek, the name of Jesus is spelled IHSOUS (iota, eta, sigma, omicron, upsilon, and sigma). In the Greek numeral system there is an equivalent numerical values to each letter.

888 is the smallest cube in which each digit occurs exactly three times, and the only cube in which 3 distinct digits each occur 3 times.
888 the smallest multiple of 24 whose digit sum is 24, and as well as being divisible by its digit sum it is divisible by all of its digits.
888 is a practical number, meaning that every positive integer up to 888 itself may be represented as a sum of distinct divisors of 888.

The following is the frequency of Jupiter Retrogrades precisely in womb of Virgo, which are approximately 24 times since crucifixion of Jesus Christ. (24 = 8 x3) or 8-8-8.

Daniel’s Royal Academy of Astrologers
What is also astronomically amazing to consider is that the retrogrades of Jupiter, 12 in all per year, produce a ‘flower’ pattern. This is seen when one has the perspective of looking down from a top view of the Solar System. Together with other planets with their various speeds also have retrogrades that produce a different ‘flower’ pattern based on its ‘frequency’ and as it were, construes the ‘Flower of Life’ motif. As noted, there have been 24 times, precisely when Jupiter has had its retrograde in the ‘womb’ of Virgo since the crucifixion of Jesus. However, none have had the accompanying variables of the other ‘Signs’ as does the last one or the 24th that culminates in the approximation of the Revelation 12 Virgo Sign in 2017.

This was the case in 2005 where there was a retrograde of Jupiter but it occurred in the early part of the year and not clearly and distantly within the ‘womb’ of Virgo. Also such a retrograde did not coincide with the Fall Feast of Trumpets on October 3rd as the rendition in 2017 immediately dovetails the Feast at the end of the Sabbath. In the 1993 occurrence, Jupiter did not even have a retrograde in Virgo and there were no planetary alignments nor any apparent association with the Feast of Trumpets that year on September 15. Even in the case that some have presented that a ‘similar’ depiction of the Revelation 12 Virgo Sign occurred in -3419 BC is not entirely correct. It does appear to be the ‘same’ but 3 major elements are not present. The 3 planets are not the same, Saturn is replaced and there is no comet in the ‘Sign’ as to accent the event. Lastly, Jupiter does not have a retrograde within the ‘womb’ of Virgo at that time.

It could be the case that this could be the corresponding time of the account of the Garden of Eden as alluded to and the pronouncement of the curse and ‘enmity’ between the 2 Seeds down through history of Humanity but the Revelation 12 depiction is only like it, not the same. Perhaps such a reason for the Sign in Virgo is that it is alerting not only the Church but Israel that a transition is coming of Jesus’ Testimony going ‘back to Israel’. It will be after the Rapture of the Bride of Christ, whenever that occurs, that the Gospel Witness and Testimony of Jesus will be transferred once again to the Jews who will be the agents to disseminate the Witness of and for Jesus. What the Bible teaches is that during the 70th Week of Years, as presented to the prophet Daniel, such a time will also be accompanied by amazing ‘Signs and Wonders’.

This time will see the completion of Israel’s commission that has not been fulfilled, as some interpret the prophecy of Daniel. The point is that Israel was complacent in terms of reading the ‘Signs’ and lost its privilege to be given such ‘revelation’ as Jesus has given to the Church, presently. It was rather ironic in that Israel, specifically demanded and demands ‘Signs and Wonder’ to include those in the Heavenlies that deal with the Sun, Moon and the Stars. However, as they neglected such ‘Signs’, the LORD Jesus rebuked the religious leaders of Israel whom He held accountable in that very generation. That ‘Last Generation’ at Jesus’ 1st coming was held accountable for not knowing how to read the prophetic ‘Signs’ of the Heavens pertaining to His visitation. For example, the ‘Sign of Bethlehem’ where the Messiah was to be birthed was known among the Priests, but was not taught to YHVH’s People. Will it be the case with similar ‘Signs’ in the Heavens just before His 2nd coming?
_________________________ 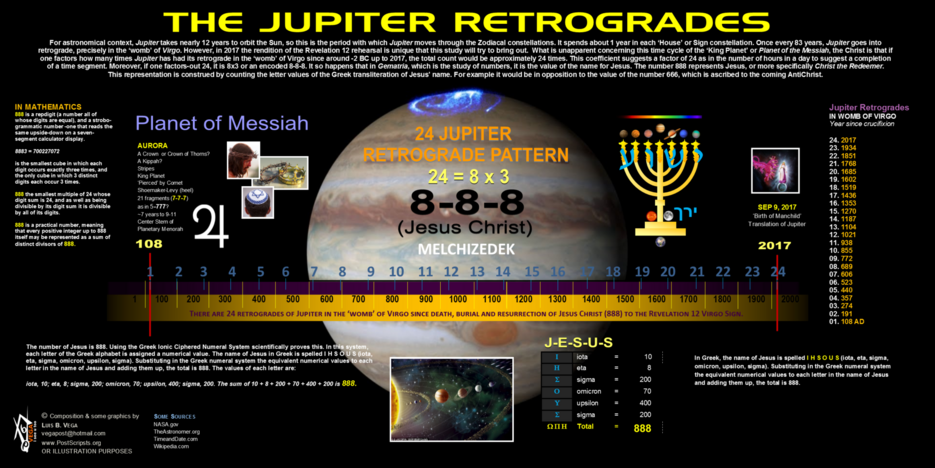