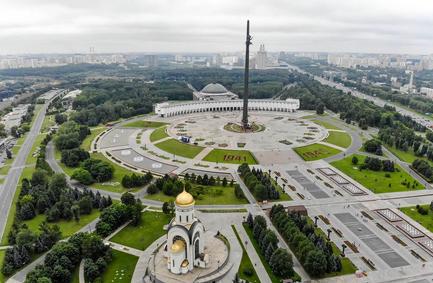 ‘You do not know Him, but I know Him. If I said I did not know Him, I would be a liar like you. But I do know Him, and I keep His Word. Your father Abraham was overjoyed to see My day. He saw it and was glad. Then the Jews said to Him, You are not yet 50 years old, and You have seen Abraham?' -John 8:55-57

The purpose of this study is to consider the Sacred Geometric layout of the Poklonnaya Hill War Memorial in Moscow, Russia. Why? In light of the quest for the Abraham Family House to be built by the joint partnership between the Vatican the United Arab Emirates, there has already been a place that symbolizes and embodies this concept that memorializes the ‘Abrahamic Houses of Faiths’. It is found in the war museum campus complex that is dedicated to the Allied victory over Nazism after World War 2. The Abraham Family House, planned to be construction in the Arabian peninsula seeks to be an ecumenical bridge of ‘Peace and Security’ that links the common core values of the 3 Monotheistic Faiths that are said, stem from the ‘Father of Faith’, Abraham.

What is of both political and perhaps prophetic significance is that many that study the Last Days are taking note of the latest peace accord that took on the name of Abraham. Such are possibly asserting that this Abraham Accord is just one further steppingstone to the eventual ‘Covenant’ that will be ‘confirmed’ with the ‘Many’ for a 7-year period which the Bible calls the Tribulation Period. These 3 ‘Faiths’ of Abraham are Judaism, Christianity, and Islam. Although many would argue that Islam is a plagiarism of the first 2. The core connection might be the personage of Abraham, but beyond that, it becomes extremely problematic in trying to synchronize the 3 Faiths. Case in point is the argument over who has the ‘Birthright’ to the Holy Land.

Both the Jews and Christians believe YHVH promised the Holy Land to Abraham through the blood lineage that followed from Isaac and then to Jacob. Jacob then went through a radical transformation to become Israel with its 12 tribes. And that it was Isaac that was the son whom YHVH tested Abraham with, not Ishmael. To the Muslims, it is not Isaac that was to be sacrificed to test Abraham’s faith but Ishmael, the son through the slave girl Hagar from Egypt. Then there is the Islamic teaching that Jesus did not physically die on the Cross of Calvary but was bodily substituted and/or that the whole event was that of a spiritual one not to be taken literally. Thus, to the Muslims, there is no blood atonement to speak of and it is to be rejected although they do pay lip-services to Jesus being the Messiah. The Abraham Family House will be a quest to try and bridge the core connection that stems from the Father of Faith, Abraham, but as a humanistic ecumenical quest, it will only last so long.

The Common Core
Such a blended religious construct will be used by the governing power that presently rules the world, that of Lucifer. He will be using it to legitimize his new hybrid religion during the coming ‘confirming of the Covenant’ that many are saying this Abraham Accord could set the stage. It will be a hybrid religion of ‘tolerance and acceptance’ by avoiding the essential distinction that actually differentiate and determines the eternal destiny of one’s soul. In what way? Both the Old and New Testaments teach of a suffering and conquering Messiah that is depicted as a ‘Lamb’ and then as a ‘Lion’. The Christians believe that Jesus of Nazareth was the fulfillment of the promised precisely given to Abraham that a final blood atonement would be given to pay for sin.

Upon the questioning of Jesus by the Jewish Ruling Council on what authority Jesus performed such miracles as giving sight to the blind and raising the dead, Jesus referred to the account of how Abraham saw the day Jesus would come to fulfill the Blood Covenant. Jesus also stated that ‘before Abraham was, I AM.’ This of course infuriated the Jewish Ruling Council as they sought to kill Jesus because in reality, such had made a compact with their King, Caesar. To them, that is where their allegiance, power and authority came from and feared losing it and the control over the People of YHVH. It is believed by many that what will unify the 3 major religious ‘Faiths’ that comprise together the majority of Humanity on Earth is the Rapture event. How so? Consider that a spiritual vacuum will arise as millions of people, most notably those Believers and Followers of Jesus disappear without a trace.

The panic and horror of the ensuing New World Order will galvanize the time as being one of an evolutionary transformation that has brought Humanity to the next level. Out of fear to a large degree, the world will seek comfort in a unifying religion that promises them ‘Peace and Security’. This is exactly as it will occur as the Man of the New World Order will arise as all 3 Faiths eschatologically claim also. The center piece however will not be the ‘House’ of the Ka’ba of Mecca nor the ‘House’ of the Vatican but the 3rd ‘House’ in Jerusalem. It will be on the Temple Mount that this Abraham House will be replicated and serve as the New World Order ‘House of Prayer’ for all Nations, the 3rd Temple. How so? Consider that the Temple Mount has 3 major domes. Each represents in essence the 3 Faiths or ‘Houses of Abraham’. There is the Dome of the Tablets on the north side that will be the actual spot on which the 3rd Temple will be built.

Then there is the Golden Dome of the Noble Sanctuary, an octogen shaped Muslim shrine that will be for ‘House’ for the Muslims. Then there is the ancient Crusader Church on the south side that is presently known as the al-Aqsa mosque. This will be the ‘House’ for the Christian, etc. So, during the Tribulation Period, the Temple Mount itself will be parceled-out and given to the Gentiles as it states the book of Revelation that the Outer Court, of which the Muslims and the Christians will possess their ‘House’ or Dome, will reside at. And by the way, the 3 Domes represent a multilayered cryptic connection to the Sun, Moon, and the Stars on 1 level. How so? The largest structure, is the former Crusader Church whose dome color is gray, representing the Moon. The 2nd largest Dome, is the golden one that represents the Sun. The 3rd dome is that of an off-white color that is the smallest and therefore represents that Stars.

Celestial Patterns
Consider also that this pattern also appears to correspond to the 3 Belt Stars of Orion. And that in turn, each represent the size corresponding to the 3 structures that are and/or will be constructed on the Temple Mount. The 3rd level of application is that the 3 structures also appear to correspond to the 3 pyramids of Giza. One can see the size difference also as there is the primary pyramid, called the Great Pyramid, then the 2nd pyramid that is slightly smaller. But then the 3rd pyramid is significantly smaller. This not only mirrors the Pyramids of Giza, the Belt Stars of Orion but the size of the structure that will constitute the ‘Abraham House’ of Faiths, both on the Temple Mount to come but currently planned to be constructed in Abu Dhabi. And true to pattern, the Abraham Family House will have the 3 ‘Houses’ also correlated to the respective sizes.

The House of Christianity will be the largest, then the House of Islam followed by the smallest one, the House of Judaism. As to its connection with the Poklonnaya Hill War Memorial in Moscow? One is only drawing attention that this concept of having the 3 Abrahamic ‘Houses’ of Faiths together interlinked does already exist. These Houses of Abrahamic are situated just south of Moscow on the Poklonnaya Hill that commemorates the Great Patriotic War. What is rather interesting is at this complex, the size proportions are also kept in that the House of Christianity is the most prominent and largest ‘House’. It is situated to the north. The other 2 Houses of Judaism which is the smallest and then with the House of Islam which is the middle-sized structure compose the base to the apparent ‘Masonic’ pyramid complex.

What one then likes to further draw one’s attention to is that from an aerial view of the entire complex looking north, the configuration is situated like a Masonic truncated pyramid. The core museum building, having an oval dome corresponds to the ‘All Seeing Eye’ of Lucifer that the Luciferian Masons espouse to be that of their ‘God’ whom they seek to enthrone and rule the world. The apex of this ‘pyramid’ that constitutes the 3 Faiths of Abraham has at its pyramidion a massive circular depiction. At its center is an obelisk with a flaming Angel that protrudes out of it. It has been well researched that to the occultic Luciferian mystery religions, this ‘Angel’ of Victory is none other than the fallen Anointed Cherub that is to rise during their New World Oder and unite the entire world to his hybrid religion. It is no different that the 3 books placed atop the alter of the Masonic Lodges and its Initiates chose 1 to be part of the whole.

In tandem with the rise of the New World Order will be the ‘man of the hour’, or what the Christians call the AntiChrist. He will be the Mashiach to the Jews and the Mahdi to the Muslims. And not surprisingly, at the center of the dome of the main museum is the statue of a Prometheus type of ‘Soviet Man’ that has the fire in his hand and proclaiming  victory. What is rather interesting is that if one notes the sacred Geometry of the complex, the apex or pinnacle, pyramidion of this memorial dedicated cryptically to the Faiths of Abraham should have had the Christian House at the apex; it does not. Why not? As the Soviet communist ideology refutes the spiritual and/or divine, it negates the preeminence of Christianity and has essentially displaced it to the side by replacing it instead with of Lucifer’s pseudo-religions. This is what will happen exactly during the coming 7-year Tribulation Period that will coincide with the rise of the New World Order.
____________________________