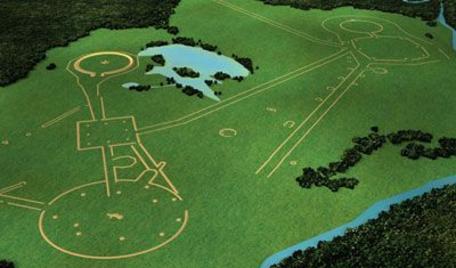 The purpose of this study is to present the evidence that the geometric ley-lines of the following Newark, Ohio Earthwork layout is set to the Cydonia, Mars ley-lines. Pertaining to the Cydonia, Mars anomalies, there are 3 main pyramid structures that comprise the Martian Motif. There is the famous Face of Mars, the giant Pentagon Fortress and the Pleiadian Pyramid City perhaps made by the pre-Adamic being. These 3 structures triangulate each other and make up the core of a large metropolitan cities on Earth as they did in ancient times and perhaps even before the Flood of Noah. What is astonishing is that such a Martian Motif is seen implemented in the architecture of almost all the ancient civilizations on Earth. This motif started, at least based on the archeological record after the Flood of Noah with Babylon and Sumer.

How the Martian Motif is tied to the ley-lines of ancient cities, temples and structures is that perhaps the lost knowledge and connection of the Martian civilization was conveyed to the few and selected ‘priestly’ class on Earth that constitutes the Secret Societies, etc. This special class of humans are perhaps tasked at keeping the legacy, lifeline and bloodline operational. Even now in the modern era, the same Cydonia, Mars Motif is incorporated into the major worship centers of the world. The Martian Motif that is basically encrypted and hidden in plain sight speaks to the powers ‘behind the curtain’ of those that really are the masters of the world, for the time being. The Newark Mounds of Ohio or Earthworks appear to portray the Cydonia, Mars motif of the 3 main pyramid structures. Such centers incorporated sacred geometry to funnel energies that assisted in opening portals and/or Stargates whereby entities such as Fallen Angels could traverse between spiritual dimensions.

The Native Americans knew of this configuration that was used to build there centers of worship and magic. According to research, the Newark Earthworks in Newark and Heath, Ohio, consist of 3 sections of preserved Earthworks: the Great Circle Earthworks, the Octagon Earthworks, and the Wright Earthworks. Such complexes are thought to have been built by the Hopewell Culture between 100 AD and 500 AD. Pertaining to the Newark Earthworks, they are the largest earthen enclosures in the world, being about 3,000 acres in extent. It is believed that the Octagon Earthworks was a cosmological observatory to the Stars, mainly the Pleiades. Coincidentally, such Earthworks have also been linked to paranormal and UFO activity. These type of mound Earthworks are in the ley-lines that crisscross the state and beyond where concentrated apparitions, abductions and sighting abound more than normal. It is as if it is a ‘freeway’ of intersecting points or ‘nexus’. Is it any wonder why Wright Patterson Air Force Base in is such an alignment?

It is also believed that for such reasons, the military base is thought to be a major hub for Extra-Terrestrial activity, research, and interaction with Aliens, etc. What is different about the Newark, Ohio Martian Motif is that the corresponding Diamond Pyramid is missing or at least not yet designated. It could be the case that this site only concentrated on the 2 other Martian pyramid complexes, that of the 7 Pyramid City patterned after the Pleiades and the Face of Mars. The corresponding area of the Face of Mars is square in configuration and the angles match that of how they are in Mars, no less. Such areas were the site of the major temples of worship that deified being that ‘came down from the Stars’, etc. True to the Martian template, the area of the ‘Observatory’ does have 7 circle mounds that correspond to the 7 Stars of the Pleiades. The Newark layout angle is triangulated to the north-south vector of Cydonia, Mars. The very unique Octagon symmetry does have 12 pegs that represents the 12 constellations and is relative to time and space as in a ‘clock’. Such Gematria is also utilized very cryptically among the Luciferians and the Occult.

An Octagon is construed by placing 2 equally sized perfect squares atop each other but with one offset. Such imagery is also utilized by the Freemasons to denote being ‘Square’ or ‘honest’ in their dealings. According to the teaching of the Masons, one example where this can be seen is with the Chevron Gas logo that is used to ‘tag’ most of their corporations, etc. It is actually the ‘Double Ashlar’. The symbol depicts 2 squares that construes an edge of 3-dimensional boxes, one on top of the other. According to 1 interpretation, the higher Square represents the Secret Societies literally being ‘on top’ regulating the affairs of the masses of the lower beings and casts of the masses that need to be dominated and controlled like cattle. This same concept of the Octagon was incorporated in the 1776 foot Freedom Tower of New York at the halfway marker of the building. Nonetheless, these are just some of the esoteric nuances of such Earthworks that the Native Americans used throughout the continent to interface between time and space according to the patterns seen in Cydonia, Mars a world away.
_______________________ 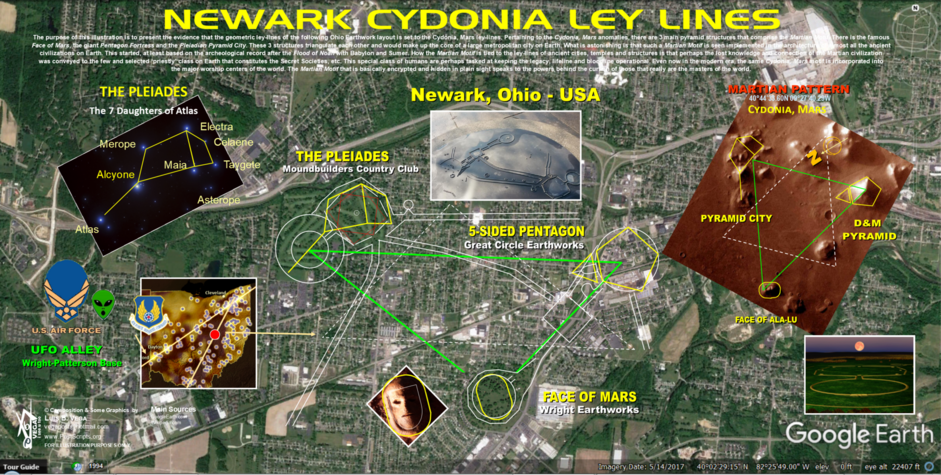