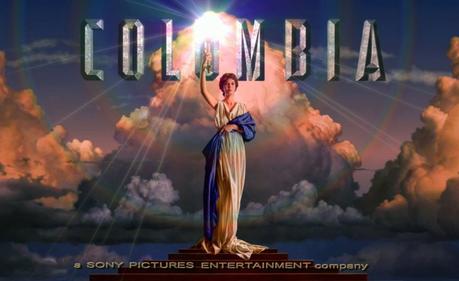 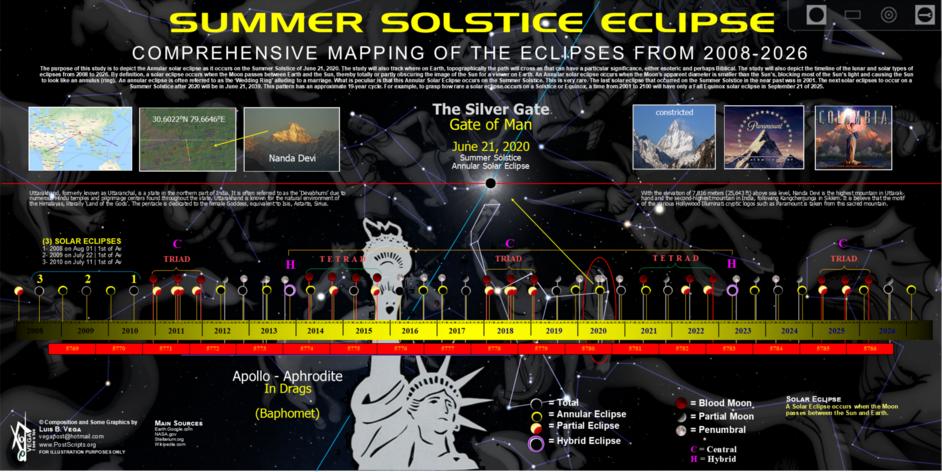 #390:
​SUMMER SOLSTICE ECLIPSE
SIGNALING OF THE CHRISTS
Midsummer Activation of the Silver Gate

‘The Sun shall be turned into darkness, and the Moon into blood, before the great and terrible Day of the YHVH come.’ -Joel 2:31

The purpose of this study is to depict the Annular solar eclipse as it occurs on the Summer Solstice of June 21, 2020. The study will also track where on Earth, topographically the path will cross as that can have a particular significance, either esoteric and perhaps Biblical. The study will also depict the timeline of the lunar and solar types of eclipses from 2008 to 2026. By definition, a solar eclipse occurs when the Moon passes between Earth and the Sun, thereby totally or partly obscuring the image of the Sun for a viewer on Earth. An Annular solar eclipse occurs when the Moon's apparent diameter is smaller than the Sun's, blocking most of the Sun's light and causing the Sun to look like an annulus (ring).

Path of Totality
Since prehistory, the Summer Solstice has been seen as a significant time of year in many cultures, and has been marked by festivals and rituals. Traditionally, in many temperate regions, especially Europe, the Summer Solstice is seen as the middle of Summer and referred to as ‘Midsummer’, as noted. Today, however, in some countries and calendars it is seen as the beginning of Summer. Esoterically, the meaning of a Summer Solstice is a time of transition and a bad omen for the Nations. It is a time of the highest occult and Satanic ritual observances that demand human blood sacrifices. It has been observed that many kings, queens, royals are born on such a date.

The path of the Annular solar eclipse on June 21, 2020 will reach its Maximum in the region of Uttarakhand, India. Uttarakhand, formerly known as Uttaranchal, is a state in the northern part of India. It is often referred to as the ‘Devabhumi’ due to numerous Hindu temples and pilgrimage centers found throughout the state. Uttarakhand is known for the natural environment of the Himalayas, literally ‘Land of the Gods’. The pentacle is dedicated to the female Goddess, equivalent to Isis, Astarte, Sirius.

What is important or of interest is that the path traverses a most unique sacred mountain, Nanda Devi. This sacred mountain has an elevation of 7,816 meters or 25,643 feet above sea level. Nanda Devi is the highest mountain in Uttarakhand and the second-highest mountain in India, following Kangchenjunga in Sikkim. It is believed that the motif of the various Hollywood Illuminati cryptic logos such as Paramount is taken from this sacred mountain. And that the 22 stars represent Fallen Angels. What is so also unique about this Annual Solar eclipse is that it comes in a Triad of eclipses. It occurs in-between 2 lunar eclipses. The 3rd lunar eclipse occurs over Washington D.C., precisely on the day of its Independence Day, July 4th. Will this eclipse signal something ominous to occur dealing with the USA? It will remain to be seen.

Eclipse Patterns
This Triad of eclipses, that of the lunar-solar-lunar occurs in a long series of eclipses that specifically occurred since 2008. Since that year, there occurred 3 total solar eclipses, each in successive years, 2008-2009-2010. What was odd was that all 3 occurred on the 1st of Av of the Jewish Calendar. Av is the month usually associated with destruction and judgment for ancient Israel. Many had seen this as a precursor of a sort of countdown as to a music score to be played, that is, ‘3, 2, 1’. These 3 consecutive total solar eclipses have not occurred since Christ Jesus. The pattern thereafter started with the first set of Triad of total lunar eclipses or Blood Moons for 2010 and 2011. They were accompanied by 4 partial solar eclipses, all within 2011. This Triad of Blood Moons has it ending counterpart to occur on 2025-26, 14 years later.

Then the Tetrad series of Blood Moons occurred on 2014-15. This was the 7th series since Jesus Christ and many saw them as a significant Sign in the Heavens for the closing of the Church Age fast approaching. In this set, 1 of the 4 solar eclipses occurred in the ‘midst’ of the Tetrad on a Spring Equinox, March 21, 2015. This was on the Jewish Religious New Year. This would be 63 months exactly to the June 21, 2020 solar eclipse. This 2014-15 Tetrad of 4 Blood Moons was the ‘center’ series in-between the Blood Moon Triad of 2011 and its ending corresponding one of 2018-19. This last Triad of Blood Moons occurred precisely on the New Years of Trees on the Jewish Calendar. What was also very unique about the Triad of Blood Moons of 2011 and 2018 is that the center Blood Moon occurred over Jerusalem but were called the ‘Bull’s Eye’ Blood Moon because the path was nearly dead on of the path of totality.

The next peculiar pattern of this 2008-2016 eclipse depicted on the timeline has to do with how the Tetrad Blood Moons of 2014-15 will have its counterpart in 2021-2022. Although this Tetrad will not totally be complete as the 2nd Blood Moon of the 4 will be a Partial lunar eclipse type. Nonetheless, what is also rather amazing and perhaps significant, is that the from these 2 Tetrad of Blood Moons, it begins by a very rare type of solar eclipse, a Hybrid one. In 2003, just before the Tetrad of 2014-15 occurred, this type of Hybrid solar eclipse took place, as its counterpart will also occur at the end of the Tetrad of Blood Moons in 2022. In 2023, the bookend Hybrid solar eclipse will seem to highlight this specific time-frame in history, perhaps even prophetic history at that. In all the types of eclipses and pairing, what is strange and unique is that the Triad of the lunar-solar-lunar in 2020 is that this combination of a Triad of eclipses had not occurred in the past nor to occur in the foreseeable future. What does it mean?

That remains to be seen but if any indication of where it crosses path on Earth and where is reaches it Maximum, then it can be very telling. So much so that as it occurs at the sacred mounting of the Hindus commemorating the mountain range of the Gods and pinnacle dedicated to the Goddess, equivalent to Isis and Sirius, it would not be beyond the esoteric rationale that such motifs are rendering the ascent of the coming AntiChrist figure. As noted, this motif is copied in the major motion picture movie studio logos. It has been well established and researched that such motifs are related to the corrupted interpretation and antithesis of what the true significance and meaning have been ascribed to such motifs of the celestial order, i.e., the Mazzaroth or Zodiac.

The Illumination of the Gate
As the solar eclipse occurs at the Summer Solstice, it takes place astronomically at the exact point where the Silver Gate is situated in the sky. It is Orion that is the Sentinel or Guardian of the Gate that is there stationed to protect it. It believed that such a Gate or Portal, Door is that it is the Gate of Man, whereby mortal traverse to Heaven from. Which a solar eclipse, it appears as Orion lighting up the Gate to be opened perhaps alluding to a ‘wedding’ that is pending. This is at the opposite end of the Universe from the Golden Gate, whose Sentinel is Ophiuchus and it is where GOD, or the Gods descend to Earth from, etc. This Orion motif in the original meaning and still is, is that of Jesus, the true ‘Light Bearer’ as Jesus said of Himself, ‘I AM the Light of the World’, etc. Orion is seen with extended arm upward, in some renditions it is a club, in others, it is a torch-light.

In other renditions, Orion is the ‘Hunter’ with a bow and arrow confronting the Bull of fury and judgment that has captured the 7 Maidens, or the Pleiades. Orion has a fleece of a lion that he has overcome. However, in the Luciferian and Kabalistic initiations and interpretations, such invert the meaning and ascribe all aspects of the majesty to Lucifer instead. For example, as mentioned, the Luciferian motifs are seen in the iconic motif of various Movie Studio logos. Many mimic celestial motifs as the Columbia logo of the woman with the torchlight at the pinnacle of the ‘pyramid of clouds it alludes to cryptically. It is also a striking mirror of the iconography of the Statue of Liberty monument as found New York and in antiquity. It is well researched that it was the Freemasons that designed and dedicated the motif to the ‘New Atlantis’, the USA.

Others have uncovered that the motif is in actuality a fusion of a transgender Apollo in drags that fuses the male and female gods of Libertas and Sirius-Isis-Astarte. Such is the rendition, cryptically of the Baphomet that has both sexes merged and who has the torch of illumination that signifies the Great Work of Prometheus given to Humanity. One arm is stretch upwards as the other arm is positioned downwards carrying a book in the case of the Statue of Liberty. One thing is for sure, such a time-span of the lunar-solar-lunar eclipses in 2020 will be a high occult/witchcraft time of activity. The purpose will be to translate such celestial alignments and its energy to Earth to accomplish their evil purpose and agenda, ‘As Above, So Below’.

If any indication of what the iconography of the Summer Solstice solar eclipse is suggesting, it is that the ‘Illuminated One’, the coming Christs are being signaled at the Gate and ready to be activated and debuted. It is the ‘Capstone’ being illuminated, that is the All-Seeing Eye of Lucifer and then of Jesus. For the Luciferians, this is what is depicted in the U.S. Federal Reserve Note’s reverse side with the unfinished truncated pyramid. This represents the Tower of Babel that was interrupted but will soon be finished and the Great Work concluded that is fast ushering-in their Luciferian New World Order. However, there is the duality and dichotomy of the original and godly motif to consider also. That the true ‘illuminated’ One, Jesus Christ will be signaled, and revealed soon to come through the Silver Gate of Heaven at the time of the Rapture from where He will summon His Bride in the promise of the Wedding Ring Sign as the ‘Great Work’ or commission of the Church Age comes to a close.
__________________