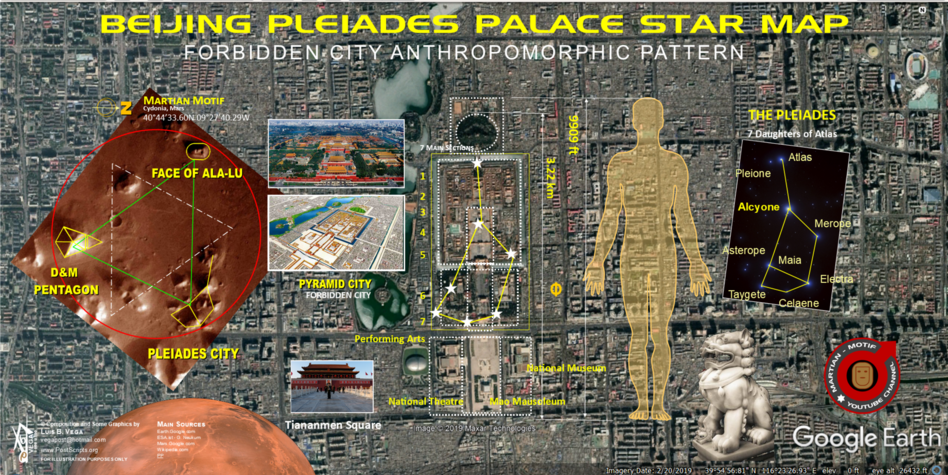 The purpose of this illustration is to suggest that the ancient city core of Beijing incorporates the Cydonia, Mars pyramid layout. This configuration includes the Pyramid City, the Face of Ala-lu or Face of Mars, and the Pentagram pyramid. From an aerial view their does appear to be 3 main centers in Beijing that fit this template design. The Cydonia, Mars complex is inverted and rotated about 90 digress. These 3 localities are the Forbidden City, the Olympic Stadium, and the area of the National Library. The Beijing National Stadium is known as the Bird's Nest because of its appearance. From the Stadium, the heading is 33.3 degrees which correlates to the 333-degree heading on Mars. The National Library area corresponds to the Pentagon pyramid and has a number 5 association to this are. This area is actually a conglomerate of 5 main structures as follows.

It is very interesting that in such a place, the Buddhist monastery would have the 5 Pagoda structure, evidently the Buddhist are in the ‘know’. The orientation of this Pentagon does appear to also follow the ley-lines of the Beijing avenues and even has a triangular apex that incorporates to the said mentioned structures. The most intriguing aspect of the Cydonia, Mars motif has to do with the Forbidden City. This is essentially an encrypted pyramid complex of temples. It incorporates the 7 main stars of the Pleiades and the entire scope of the layout is construed to that of an anthropomorphic proportion of the human form. As the Pleiades Pyramid City on Cydonia, Mars also incorporates a star or pentagram, this is befitting of the human form.

The National Center for the Performing Arts corresponds to Taygete. The manmade lake adjacent to the Forbidden City to the west also has 2 locals that correspond to Asterope and Pleione. The perimeter of the entire border is 17.76 miles. This numerical coefficient echoes the 1776 Luciferian unfinished pyramid that memorializes the interruption of Nimrod’s Tower of Babel. It was from this point in time after the Flood of Noah that YHVH confused the single known language of mankind. At this juncture in time, the 70 nations arose and dispersed to the 4 corners of the globe. Such civilization thus had a common core knowledge and reference point. Evidently this Cydonia, Mars motif is universal and extra-terrestrial in origin. They were 1 generation removed from the Flood event and the technologies and knowledge of the Atlantean Golden Age. The following are some observed approximate measurements from GoogleEarth coordinates.

From tope edge of ‘head’ of anthropomorphic form to base, the span of the Forbidden City = 9909 ft
From base of mount within the ‘head’ of the form, spanning the complex = 3.22 km

Thus, they were more in sync it the direct contacts of the Fallen Angles that transmitted this Cydonia, Mars motif to those in power or would be given the power to rule the masses through finances, government, and society on Earth. This is the real conspiracy as the lineage of those at the top continue in the agenda of the Watchers. The Luciferian signature of this bestowed power was the Cydonia, Mars pyramid motif that is basically encrypted in almost every world capital of prominent power, either religious, political, etc. The ancient Chinese recognized that such ley-lines were corresponding to the ‘gates of Haven’ and temple or ‘pyramids’ were built at such Earth energy grids. The hexagram geometric configuration of such a motif perhaps facilitates the transmittance of such beings, to and from the Earth at these sacred points.
_______________________