#497:
WHEN WAS JESUS CRUCIFIED?
PONTIUS PILATE LETTER TO CAESAR
Evidence for the True Dates that Changed the World

‘After Jesus was born in Bethlehem in Judea, during the time of King Herod, Magi from the East arrived in Jerusalem, asking, Where is the One who has been born King of the Jews? We saw His Star in the East and have come to worship Him. When King Herod heard this, he was disturbed, and all Jerusalem with him.’ -Matthew 2:1-3

The purpose of this study is to consider the correct date of Jesus’ crucifixion. There is much debate, confusion and speculation on what was the date, correctly of Jesus’ birth and crucifixion. Since the death of Jesus, many have asked that question also and have arrived at different dates. Based on an online Blog chat about historical events pertaining to Jesus, a book was mentioned, The Genesis Factory by Yacov Rambsel. In the book, it quotes another book written, in 1887 by a Reverend W. D. Mahan, called The Archko Volume. In it, it purports that Mahan found 1st Century documentation concerning the details that confirm the Biblical account of what happened to Jesus at His crucifixion. Mahan researched the Libraries in the Vatican and Constantinople.

He chronicles that he found a Papyrus Scroll of a letter written by Pontius Pilate to Caesar. The date? It was purported to have been dated to 31 A.D. In the scroll, Pilate expounds on what was going on with Jesus; meeting Him, what the Mob was like at the crucifixion, the great noise and the 3 hours of darkness at Golgotha. It also had the quote from a Roman Centurion at the tomb, etc. And the concluding remark of Pilate was that ‘I am almost ready to say, as did Manlius at the cross, Truly this was the Son of God.’ If the letter is authentic, it would be amazing but one wonders why such a piece of Biblical evidence that would essentially collaborate the Gospels would not be more exposed or scrutinized. And did the Romans have a custom of writing on Papyrus Scrolls? It is true though that the Vatican Library does kept such Letters and relics. And such types of documents are kept under lock-and-key.

So, as to the question, was Jesus then crucified in 31 AD? Not likely. Why? Consider that the world then was based on a time that used the Julian Calendar. However, it was in sync with the Jewish Calendar, to say that before the change to the Gregorian Calendar, the reference points in time and days were the same. The discrepancies come later when Pope Gregory then changed the Julian Calendar. When this occurred, there is at least a year’s difference to account for. This to say that the Letter of Pilate to Caesar should have then been dated to 32 AD. Why? The dating system of BC/AD did not come until 525 AD. See note below from Wikipedia. This to say that when Pilate wrote that letter, he was not assuming it was year 31 AD but had the Julian Calendar to go by. And having a 1-year discrepancy, it would actually have been in the 32 AD.

Historical Contexts
‘The terms anno Domini (AD) and before Christ (BC) are used to label or number years in the Julian and Gregorian calendars. The term anno Domini is Medieval Latin and taken from the full original phrase Anno Domini Nostri Jesu Christi, which translates to ‘In the year of our Lord Jesus Christ’. This Calendar Era is based on the traditionally reckoned year of the conception or birth of Jesus, with AD counting years from the start of this epoch and BC denoting years before the start of the era. There is no Year Zero in this scheme, so the year AD 1 immediately follows the year 1 BC. This dating system was devised in 525 by Dionysius Exiguus of Scythia Minor, but was not widely used until the 9th century.’

Then consider that this BC/AD is problematic in that if it is true, Jesus would have been then 32 years old using 1 AD as His birth-date. Consider the ancient Jewish protocols that no Rabbi could take-on Disciples until a man was 30 years of age. If Jesus had a 3.5-year ministry or 1260-day count, it would mean that Jesus was 28.5 years old when He started His Ministry, and that would have been too early. There are those that do argue that Jesus was born in -4 BC due to some calculations based on Herod’s death. But realize that there were 4 Herod’s and the Patriarch had sons who took on that Family name as a Title too. It was like the Romans did with the name Caesar, etc.

Based on research one has done on determining the correct date of Jesus’ crucifixion, it has been based both on Astronomical Evidence and then the collaboration with the Essenes Calendar done by the work of Ken Johnson. One strongly suggests that Jesus was indeed born on September 11, -3 BC. Here are some conjectures based on some key Astronomical pieces of evidence. Consider that the various planetary conjunctions in Leo with Venus and Jupiter were key to the Magi in the East` in determining when the King was born. The Bible states that they ‘Saw His Star rising’. It then gave the Magi about a 1 year for their journey to travel from Babylon to Jerusalem to meet with Herod.

They then went on to Bethlehem to meet the King, who at that time was then a baby who was about 1.3 years old. One can use Stellarium to see the various conjunctions of Venus with Leo, twice and a triple conjunction of Jupiter the King Planet, with Regulus the King Star, in the King Sign of Leo. Then Jupiter started its Retrograde that appeared to ‘stop’ over Bethlehem in December of -2 BC when the Magi finally arrived there. This is why then Herod had all the Babies 2 years and younger murdered in Bethlehem and the surrounding area for good measure.

There are those that believe this date of 9-11 is thus used of the Enemies of Christ Jesus to mock and provide an antithesis because with His birth, all of Humanity’s history and destiny that was headed for Hell, changed. One did also do a specific calendar study that shows how the year 32 AD appears to be in sync with Jesus’ birth in -3 BC, then His proclamation of the Jubilee Year in 28 AD and then His Triumphal Entry, to the day in April 10, 32 AD. This would lead to April 14, 32 AD as the Crucifixion Date, as the Passover Lamb had to be ‘inspected’ for 4 days. See several charts below to study. A link to Ken Johnson’s interview is given where he states that according to the Essenes’ Calendar, 32 AD was indeed the year the Messiah was to have died. Excerpt follows.

‘The Essene Calendar System all mapped-out the concept of 7000 years with a Millennium at the end. There is 6000 thousand years of human history. The 6000 thousand years are broken up into 3 Ages of 2000 years. Each 2000 years is broken up into 4 ‘Unas’. Each Una is a 10 Jubilee Cycles or a total of 500 years. In the prophecy in the Melchizedek Document, it says the end of the Age (Just prior to the beginning of the Age of Grace or Church Age) was to be the 10th Jubilee of the cycle.

The Essenes said that the Messiah would come and be crucified or would die for sin that would make that event to reconcile Sinners back to GOD. And that it would be 1 Shemitah or a 7-year Sabbatical Cycle after the end of the 9th Jubilee at the end of the Una of their Age. So, if one calculates that back, the End of the Age was 75 AD, minus 1 Jubilee (50 years), which equals 25 AD. Then if one adds the 1 Shemitah of a 7-year period, that is 25 AD plus 7 years is 32 AD.‘

The Essenes also taught that the Church Age was associated with a Summer Wheat Festival and Harvest…and purposely hidden and confused by the Pharisees of when the Church Age was to start and end. One has also compiled a book of the compelling evidence that suggests a September 11, -3 BC birth and April 14, 32 death that is based on more Astronomical Signs. The book is titled, ‘The Cosmology of Christ’. Is this issue of when Jesus was crucified or was born important? Well, yes only that the birth and death of the Savior of the World are the most important events to intersect human history.

And it is why there is a deliberate attempt to confuse the date so as to cast doubt on the credibility of Scripture and Jesus' purpose. In other words, if Bible Believers cannot get this simple date right, what is to say all that is yet to occur will be correct either? The subject of Jesus’ birth and death is for sure a fascinating aspect to consider. For example, one thinks that one has never come across the actual name of that Roman Soldier, Manlius that was the one that the Gospel accounts note. The dates of these events in history, the birth, death, burial and resurrection of Jesus was something someone like Pilate was sure to write home about and to study even now.
__________________________

Divine Patterns of the Messiah
This book seeks to unlock the secrets of the celestial blueprint of the Last Days based on the ‘image and likeness’ of Jesus Christ; that is His pattern of the Body Form and its dimensions that occur on a prophetic scale. Such patterns are seen in the literal lifespan of Jesus’ life timeline, the Ark of the Covenant, the Solar System and the Human Form to name of few that this book will examine and present. These alignments and eclipse patterns could lend a visual clue as to the timing of Christ’s actual birth and return.
----------> ORDER ON AMAZON BOOKS <---------- 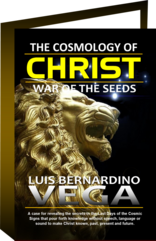