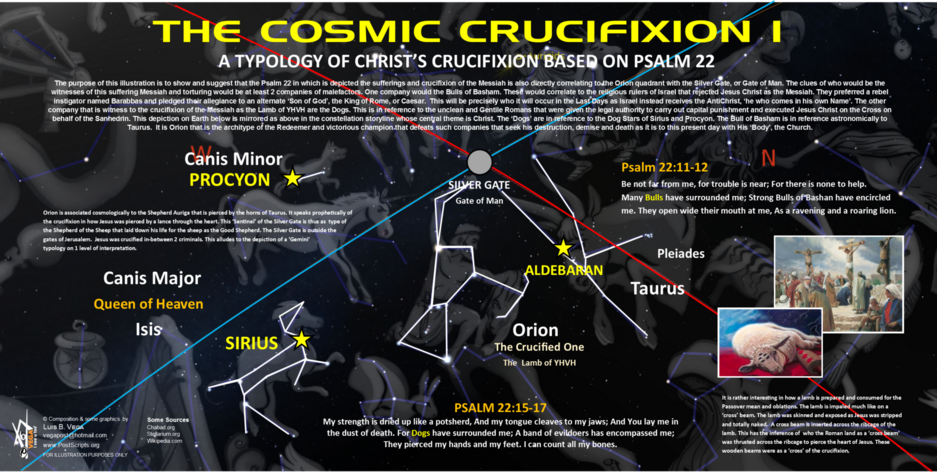 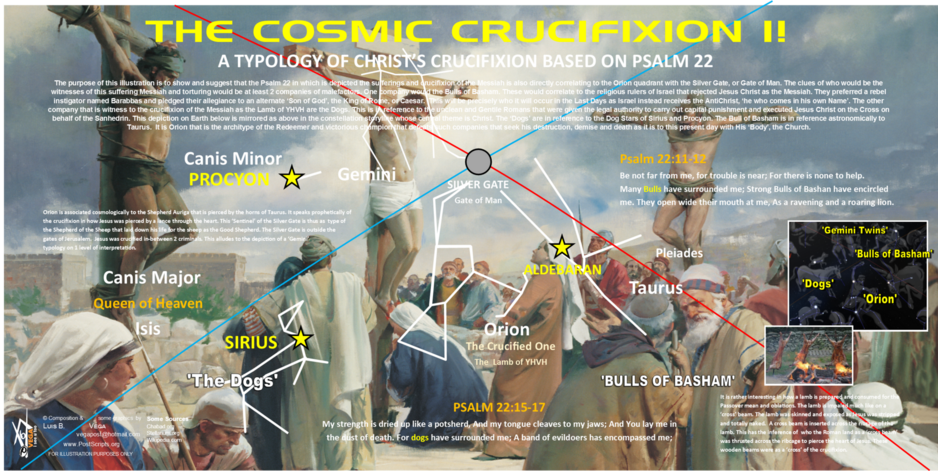 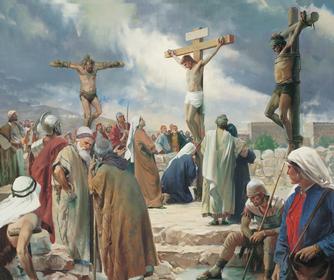 COSMIC CRUCIFIXION
AS ABOVE, SO BELOW
Typology of Christ’s Death Based on Psalm 22

‘Be not far from me, for trouble is near; For there is none to help. Many Bulls have surrounded me; Strong Bulls of Bashan have encircled me. They open wide their mouth at me, As a ravening and a roaring lion. My strength is dried up like a potsherd, And my tongue cleaves to my jaws; And You lay me in the dust of death. For Dogs have surrounded me; A band of evildoers has encompassed me; They pierced my hands and my feet. I can count all my bone.’
- Psalm 22:11-17

The purpose of this study is to show and suggest that the Psalm 22 in which is depicted the sufferings and crucifixion of the Messiah is also directly correlating to the Orion quadrant with the Silver Gate, or Gate of Man. The clues of who would be the witnesses of this suffering Messiah and torturing would be at least 2 companies of malefactors. One company would the Bulls of Basham. These would correlate to the religious rulers of Israel that rejected Jesus Christ as the Messiah. They preferred a rebel instigator named Barabbas and pledged their allegiance to an alternate ‘Son of God’, the King of Rome, or Caesar. This will be precisely how it will occur in the Last Days as Israel instead receives the AntiChrist, ‘he who comes in his own Name’.

The other company are the ‘Dogs’ that witnessed the crucifixion of the Messiah, as the Lamb of YHVH. This is in reference to the unclean and Gentile Romans that were given the legal authority to carry out capital punishment and executed Jesus Christ on a cross, on behalf of the Sanhedrin. This depiction of the crucifixion on Earth below is mirrored as above in the constellation or Mazzaroth storyline whose central theme is Christ. The ‘Dogs’ are in reference to the Dog Stars of Sirius and Procyon. The Bull of Basham is in reference astronomically to Taurus. It is Orion that is the architype of the Redeemer and victorious champion at Calvary that defeats such companies that seek His destruction, demise and death. Currently, this same evil force of the Spirit of AntiChrist is aimed against the Church Age in this present time.

Orion is associated cosmologically with the Shepherd Auriga that is pierced by the horns of Taurus. Orion speaks prophetically of the crucifixion in how Jesus was pierced by a lance through the heart. As a type of Orion, this ‘Sentinel’ of the Silver Gate is thus as type of the Shepherd of the Sheep. Jesus gave His Blood life for the sheep as the Good Shepherd. The Silver Gate is outside the gates of Jerusalem. It is on the top of the Mt. of Olives where the Dome of the Ascension is presently, opposite side of Mt. Calvary. It is rather interesting in how Jesus was crucified in-between 2 malefactors. These 2 entities could also be represented by the ‘Twins’ of Gemini as this constellation is configure with Orion suggesting to be in the ‘midst’ of them.

This event of the crucifixion of Christ is believed to be prophetically referenced in Psalm 22. There are at least 2 companies that are noted as ‘Beasts’ that sought and seek to devour the Manchild, Jesus Christ. These are the ‘Dogs’ and the ‘Bulls of Basham’. Such was the case at Jesus’ crucifixion in that the supposed ‘Learned Elders of Zion’ were there to mock Jesus and demanded He perform more signs and ‘come down from the cross’ if He was the true Son of GOD, the Prince, the Messiah. The other company were the Romans whom the Jews consider Gentiles and thus ‘unclean’ no better than a ‘Dog’. These ‘Dogs’ correlated cosmologically to the Canis Major and Canis Minor having their prominent stars of Sirius and Procyon as the ‘Dog Stars’.

The so called ‘Learned Elders of Zion’ would have recognized these convergences of prophetic factors even depicted and occurring at this crucifixion. It was not unlike any other mundane one the Romans carried out. Such a prophetic and astronomical parallel on Earth as they were in the Heavens of the crucifixion of Christ Jesus was not missed by them. Why? Such supposed Rulers of Israel were in actuality ‘wizards’ and ‘warlocks’ of a different Father and King. These are of the type who studied the forbidden Babylonian Zohar's and such other books that contained the so-called deep secrets and dark magic of Lucifer.

The Sanhedrin and the ‘Teachers’ of Israel did recognize this setting as being prophetic. For example they demanded Pilot revise the public notice of Jesus’ supposed offence. Such notices of the infraction or crime of those being crucified were nailed also to the cross of the offender. In this case it has been suggested that the acronym of the phrase that Pilot inscribed nearly spelled-out the unspoken Name of the GOD of Israel, YHVH. This is the Tetragrammaton or Greek for ‘The 4 Letters’. The ‘office’ was written as follows. Of note, there is no ‘W’ letter in Hebrew and a U or V is instead used.

‘And Pilate wrote a title, and put it on the cross. And the writing was JESUS OF NAZARETH THE KING OF THE JEWS. This title then read many of the Jews: for the place where Jesus was crucified was nigh to the city: and it was written in Hebrew, and Greek, and Latin.’ -John 1:19

To reiterate, this study suggests that the physical crucifixion of Jesus Christ on Mt. Calvary just outside the present day Damascus Gate mirrored the cosmological depiction surrounding Orion in the Silver Gate quadrant of the Mazzaroth or Zodiac. Both the earthly and heavenly occurrences refer prophetically to this key time in the redemptive work of the Son of God to save Adam’s race from Eternal Death as the substitutionary Passover Lamb of YHVH.
___________________________