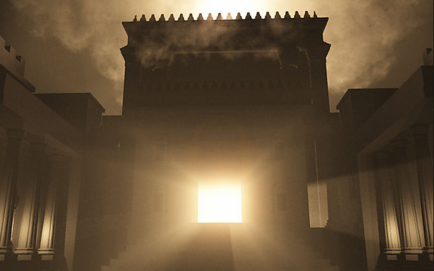 ‘But you have this to your credit: You hate the works of the Nicolaitans, which I also hate. He who has an ear, let him hear what the Spirit says to the Churches. To the one who is victorious, I will grant the right to eat of the Tree of Life in the Paradise of GOD.’ –Revelation 2:6-7

The purpose of this study is to suggest that the Temple Mount is configured to the Orion Belt Star alignment and that of the Great Pyramids of not only Egypt and Mexico but of Persepolis in particular. With emphases of the Persepolis pattern, this constellation of Taurus depiction stresses the template that was used to construct the Royal Way that led to Persepolis in Persia. The emphases of the Temple Mount overlay will be with the theme of ‘Paradise’ as it was perhaps where the ‘Gate’ to Eden was and from the gardens within these Halls of Persepolis that the word ‘Paradise’ comes from. The overtones of Biblical prophecy is striking. Cyrus the Great started the project of building the 7 chamber Halls of Persepolis to mirror that of the Pleiades. He was also considered a ‘Messiah’ figure as he did not enslave the subject nations he had conquered. The Gate or door to the city platform or ‘Temple Mount’ of Persepolis had 2 columns as did the Temples in Jerusalem that to some, believe is a ‘Gate’ to Heaven.

The temple was called the Hall of All Nations as the Temples of YHVH were called the House of Prayer for all Nations. It is highly suggestive that the façade of the House of YHVH and that of the Gate to ‘Paradise’ in Persepolis are nearly identical in theme. The processional way to Persepolis was laid-out in the outline of the constellation of Taurus. This alignment of 3 ‘Stars’ match the 3 Stars of Orion and the structures of the Temple Mount in Jerusalem. This Taurus outline can also be configured against the Temple Mount that would envelope the entire Kidron Valley in-between the Temple Mount and the Mount of Olives. What is rather amazing to consider is that as the overlay of the constellation of Taurus is set over this area, the Bull’s Eye correlation of the Star of Aldebaran matches the location of the Valley Temples; those of Absalom for example.

The next amazing ley-line correspondence has the Taurus line to the Pleiades match exactly to the Dome of the Tablets on the Temple Mount. Could this alignment of the constellation of Taurus suggest and confirm the exact location of the Holy of Holies? This Pleiades correspondence would match in the sense that the Menorah, a 7 candlestick is what Jesus Himself associates with in the book of Revelation. He likens the 7 candlesticks to the 7 Churches of Asia and to include their corresponding ‘Star’ and in an Angel no less. Thus, the Menorah in the Holies of the Temple would thus correlated to the Pleiades constellation position and ley-line from the Kidron Valley Taurus template. This Orion-Taurus-Pleiades pattern is mirrored all over the world and specifically to temples of worship.

The study went on to suggest that this same ‘House of the Shining One’ in Teotihuacan has the same dimensions as the coming 4th Temple of Ezekiel that will be built for the duration of the 1000 year Millennial Reign of Jesus Christ on Earth when He returns. A clue as to the correct matching of pyramids with Stars and the 3 Domes of the Temple Mount have to do with the color of the domes. However, based on the color of the domes, the following is mirrored and observed. The Dome of the Tablets corresponds to the ‘Stars’ and white in color and as was the1st and 2nd Temples of YHVH. The Dome of the Rock corresponds to the ‘Sun’ and is gold in color. The Dome of al-Aqsa mosque corresponds to the ‘Moon’ and is grey in color, etc. It is also strongly argued that the Dome of the Tablets is the actual center point of where the Holy of Holies is located. Several Jewish organizations such as The Temple Institute are now ready for the Holy Sacrificial Ordinances to begin.

The point is that such a Taurus-Pleiades template can perhaps lend some evidence that the Menorah within the Holies was in fact situated on the Temple Mount and not some alternate spot as it has been recently hypothesized. One of the main arguments of why the Temple could not have been on the Temple Mount is that a Roman military garrison of nearly 10,000 men had to be housed in such a complex. Most Roman forts were of the approximate size of the Temple Mount. However, the researchers fail to factor in that in such ancient and modern times even, ruling powers forced the quartering of soldiers in homes. There was a huge military complex also on the Mount of Olives that is not taken also into consideration that would have easily accounted for the number of Roman soldiers to be quartered.

As to the coming 3rd Temple, the designated Priesthood is trained; the utensils and the major Temple furnishings are already made and ready to be implemented. To reiterate, what is still needed is the Ark of the Covenant that Moses built to be revealed and to be re-housed under the 3rd Dome. The 3rd Dome, is the called the Dome of the Tablets. This is where the Temple of the original ‘Shining One’ once stood and will. The Glory filled the cubed Holy of Holies at this point on Earth. It was the true copy of the original in Heaven as it is a Throne. This was and is the ‘Gate to Paradise’ and was the ‘Gate’ to Eden perhaps. The 3rd Temple is coming. It would appear that the sacred geometry related to the Taurus overlay with the Pleiades designating the actually spot where the 7 ‘Stars’ or ‘lights’ of the Menorah stood indicates where the Temple Mount must be built.

This building, celestially must be the 3rd building to correspond to the Orion’s Belt Star alignment and the 3rd Temple will be build over the Dome of the Tablets. The reconstitution of this ‘Celestial Gate’ and Menorah-Pleiades correspondence is also a prerequisite for Jesus’s 2nd coming. He foretold that the Temple would be standing based on the revelation given to Daniel of the Abomination of Desolation that would need to occur along with the dealings of the actual AntiChrist. The contention with the ‘Enemy at the Gate’, i.e., the fallen Anointed Cherub, Lucifer seeks to control this ‘Celestial Gate’ and the ‘Testimony’ of the 7 Stars of the Pleiades, both figuratively and literally perhaps.

Why? It is because the Pleiades speaks of the ‘Congregation of the North’. It speaks of the ‘Light’ that the 7 candlesticks gave. Lucifer’s name even is a connotation of that which is of ‘light’, lucis in Latin and of Helel where Halleluiah or ‘praise’ comes from. Basically Lucifer is seeking worship of not only the Creation but that of Jesus as it was contented in the confrontation between Lucifer and Jesus in the 40 day testing of Jesus in the Wilderness before Jesus set out to preach the Good News of the Gospel. The Bible declares that Lucifer’s AntiChrist, his ‘chosen one’ will be the one that will usurp the 3rd Temple and cause the Sacrifices to cease. At that time, Lucifer will physically possess this Son of Perdition and enter the 3rd Temple to cause it to be ‘desolate’ by his ‘abominable’ act of declaring himself ‘GOD’. All other prior types were just rehearsals, like that of Antiochus Epiphany.

As to the Menorah-Pleiades correlation of the Holies, such is the case with all of the Orion-Taurus-Pleiades patterns found around the world. They pertain to a ‘Gate to Heaven’, a Stargate or portal that interfaces the Earthly dimensions with that of the abode of the Creator and the Angels, both good and evil, etc. The pyramids of Giza and of Teotihuacán and the Royal Road to Persepolis, for example were a copy of the ‘Heavenly City’ of the Gods perhaps. It has been Lucifer that has corrupted the ‘heavenly template’ to his glory. This celestial template is seen throughout various world empire capitals as a counterfeit of the Messiah shepherd priest, much like that of the ministry of Jesus Christ. Such was the case with the ‘apparition’ of Quetzalcoatl in the Americans, etc. During the Persian Empire, it was Cyrus the Great. As noted, he built his world capital after the constellation of the Orion-Pleiades-Taurus celestial template.

It outlined the Royal Road leading up to the ’Star Gate’ to the Pleiadian Places or Halls were they were adorned with the gardens and orchard, that is ‘Paradise’. Amazingly, this similar Orion-Pleiades-Taurus celestial template is fashioned and perhaps designed from Jerusalem. To reiterate, what this study strongly suggests is that the Taurus-Pleiades constellation can be superimposed onto the entire Kidron Valley in Jerusalem. With the outlines as roads and certain landmarks, the suggested correspondence is that the Temple of YHVH, precisely, the Menorah within the Holies appears to correspond to the Dome of the Tablets area. This approximate location on the Temple Mount appears to match that of the Pleiades position within the Taurus outline superimposed upon the Temple Mount. If such would be the case, t would render it as the ‘Star Gate’ to the ‘Halls’ and Throne Room of the King of the Universe just as much as the one was in Persepolis.

This same Taurus-Pleiades pattern would corroborate the Persepolis template in that the House of Prayer for all Nations echoes the theme designed by Cyrus the Great and served as a sort of ‘Star Gate’ to the entrance of the 7-champer Halls of ‘Paradise’, etc. In essence, the opening of the doors to the Temple of YHVH on the elevated stone platform also led to the ‘Paradise of GOD’. As it has been noted, the word for Paradise comes from the old Iranian word, paridayda which means ‘walled enclosure’. It came to indicate the expansive walled gardens of the Persian Empire. The term eventually appeared in Greek as parádeisos from where the modern notion for a ‘park’ is derived from. It has its roots from the famous gardens and orchards of Cyrus the Great, Darius and Xerxes in Persepolis.

As to the ’Star Gate’ theme and possible correlation of such Houses of Worship, Persepolis, for example opened up to the Hall of the Nations, it led out to the 7 main structures on top of the platform of stone much like the Temple Mount. It was where the King had his Halls and royal residences, etc. Could it be as many over the centuries have suggested that such a celestial pattern is also at play in that the House of Prayer for all Nations, at the Temple Mount in Jerusalem was the actual ‘Gate’ to the ‘Paradise’ on Earth, that is the Garden of Eden? Moreover, could such a place been also the actual corresponding ‘Stargate’ or ‘Doors’ to where the Creator, YHVH dwells?

The Bible teaches that one day the Saints of the Most High GOD, YHVH will be called to go through the ‘Star Gate’ of the Temple of YHVH in Heaven and be ushered into the ‘Paradise of GOD’ that is described in the book of Revelation. It is understood that the coming New Jerusalem with have this ‘Paradise of GOD’ in it as the Tree of Life will be reconstituted and used for the pleasure of eating and the healing of the Nations. It will be the place that like the ‘Greater Cyrus’, Jesus Christ will be the benevolent King and hold audience in the celestial Apadana where there will be many ‘mansions’ for those of this royal and loyal subjects to enjoy in the true ‘Paradise of GOD’ restored on Earth.
__________________________