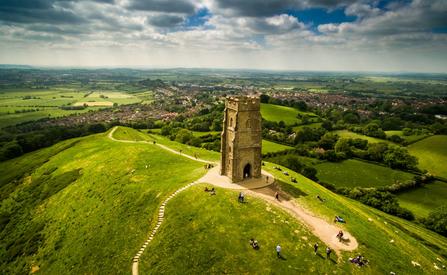 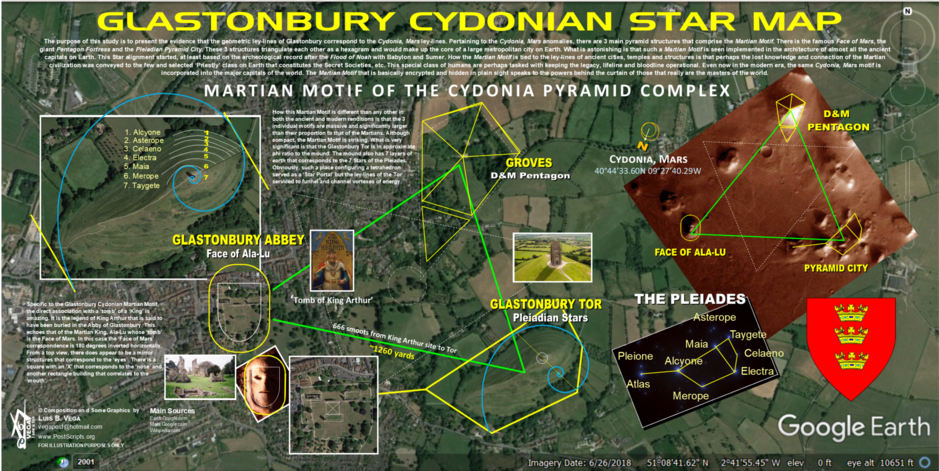 #336:
​GLASTONBURY TOR
THE MARTIAN MOTIF PATTERN
Tomb of the Once and Future King

‘The best thing for being sad … is to learn something. That is the only thing that never fails. You may grow old and trembling in your anatomies, you may lie awake in the middle of the night listening to the disorder of your veins, you may miss your only love, you may see the world around you devastated by evil lunatics, or know your honour trampled in the sewers of baser minds. There is only one thing for it then — to learn. Learn why the world wags and what wags it. That is the only thing the mind can never exhaust, never alienate, never be tortured by, never fear or distrust, and never dream of regretting.’ -The Once and Future King, T. H. White

The purpose of this study is to strongly suggest that the Glastonbury Tor and its immediate surroundings to include the Abbey is construed to match the ley-lines of Cydonia, Mars. With all the mystery, folklore and magic surrounding Glastonbury Tor and its legend of Merlin, King Arthur, one has not considered the direct connection with Mars. This study will only seek to contribute this Astro-Archeological aspect to the already plethora of amazing work done on this ancient site. The site of the mysterious and majestic Glastonbury Tor or Tower is exactly 33 nautical miles to Stonehenge and approximately 40 miles to Avebury. Interestingly, the same Cydonian Martian Motif layout in Avebury is a near mirror image to the Glastonbury one.

Pertaining to the Cydonia, Mars anomalies, there are 3 main pyramid structures that comprise the Martian Motif as this study describes the area with. This entire inference of making the connection of the layout of Glastonbury with that of Cydonia, Mars is within the Astro-Archeological discipline. This relatively ‘new’ science is increasingly becoming more important. It is helping to identify ancient sites, contributing to the chronicling of their astronomical value and origins. It is also suggesting that ancient Humanity on Earth did indeed have a connection, contact and communication with other ‘Beings’ and ‘worlds’. The evidence is the replicating of such ‘Motifs’ found on Mars for example. There is the famous Face of Mars, the giant Pentagon Fortress and the Pleiadian Pyramid City.

These 3 structures triangulate each other as a hexagram and would make up the core of a large metropolitan city on Earth. What is astonishing is that such a Martian Motif is seen implemented in the architecture of almost all the ancient capitals on Earth. This Star alignment started, at least based on the archeological record after the Flood of Noah with Babylon and Sumer. How the Martian Motif is tied to the ley-lines of ancient cities, temples and structures is that perhaps the lost knowledge and connection of the Martian civilization was conveyed to the few and selected ‘Priestly’ class on Earth that constitutes the Secret Societies, etc. This special class of humans are perhaps tasked with keeping the legacy, lifeline and bloodline operational.

The Magicians of Mars
Special ‘bloodlines’ have mainly been ‘initiated’ as with the Royals of Britain and that of the rest of the other Crowns of the Nations. This site at Glastonbury has by far the strongest connection as it directly has a Martian correlation to a ‘Tomb of a King’ that is mysteriously said to return one day. Even now in the modern era, the same Cydonia, Mars motif is incorporated into the major capitals of the world. The Martian Motif that is basically encrypted and hidden in plain sight speaks to the powers behind the curtain of those that really are the masters of the world. Evidently, Britain had a very ancient and connected people that knew of the Cydonian Martian Motifs and incorporated them within their monoliths and sacred circle groves. Perhaps such personages as Merlin was one such ‘Priest’ that was shown and taught that such ley-lines and configurations exist on Mars.

However, according to the Bible, such Beings from Mars and/or other places such as attributed to have come from Orion and the Pleiades also where the ones that taught Humanity the forbidden crafts. This forbidden knowledge included how to engage in sorcery, magic and how to wage war, make weaponry and abort fetuses for example. There is increasing evidence that the peoples and structures found all over Britain date to the same period as the Great Pyramids of Giza in Egypt and the monoliths of Göbekli Tepe. Such sites really served and continue to serve for the same purpose as being ‘Star Gates, portals and energy vortexes. In fact, ceremonies out in public but those also made in secret continue to be made at such sites. In the case of England, there has now been a resurgence in the Druid religion and rituals.

Such sites like Glastonbury, Avebury, Stonehenge, etc., were and are places where dimensions are crossed, and entities are summoned and perhaps humans are taken through. Specific to the Glastonbury Cydonian Martian Motif, the direct association with a ‘tomb’ of a ‘King’ is amazing. It is the legend of King Arthur that is said to have been buried in the Abbey of Glastonbury. This echoes that of the Martian King, Ala-Lu whose ‘tomb’ is the Face of Mars and is believed to have been buried there. In this case the ‘Face of Mars’ correspondence is 180 degrees inverted horizontally. From a top view, there does appear to be a mirror structures that correspond to the ‘eyes’. There is a square with an ‘X’ that corresponds to the ‘nose’ and another rectangle building that correlates to the ‘mouth’.

How this Martian Motif is different than any other in both the ancient and modern renditions is that the 3 individual Martian Motifs are massive and significantly larger than their proportion to that of the Martian ones. Although compact, the Martian Motif is striking. What is very significant is that the Glastonbury Tor is in approximate phi ratio to the mound. The mound also has 7 layers of earth that corresponds to the 7 Stars of the Pleiades. Obviously, such a place configuring a tetrahedron served as a ‘Star Portal’ but the ley-lines of the Tor serviced to funnel and channel vortexes of energies. To the ancient peoples of the world after the fall of Adam and Eve that lost much of the sacred knowledge, ironically seeking to obtain it, such Beings from Mars would have appeared to have been ‘Magicians’.

With the advanced powers and abilities, that no doubt the Fallen Angels have, such would have been taken for ‘Magicians’.In the book of Enock, it does chronicle that in fact this scenario did take place and various rebel Angelic Beings, left their Abode and 1st Estate to come to Earth and intentionally mate with human women to corrupt the pure human gene pool/race. In fact, the book of Revelation foretells of how such Beings now presently locked-up for such infractions against YHVH and Humanity are waiting to be let-loose in the Last Days. As part of YHVH’s judgement upon a depraved and corrupt world, such entities will display their ‘Signs and Wonders’. Their long awaited ‘Once and Future King’, King ‘Arthur’ is to return from the ‘dead’, to rule Earth as in the days of ‘Camelot’, etc. This coming false ‘Christ’ figure will appear to help Humanity and have all the answers. However, it will be part of the deception the Bible states will be ‘The Lie’ that will be believed by the world.
___________________________