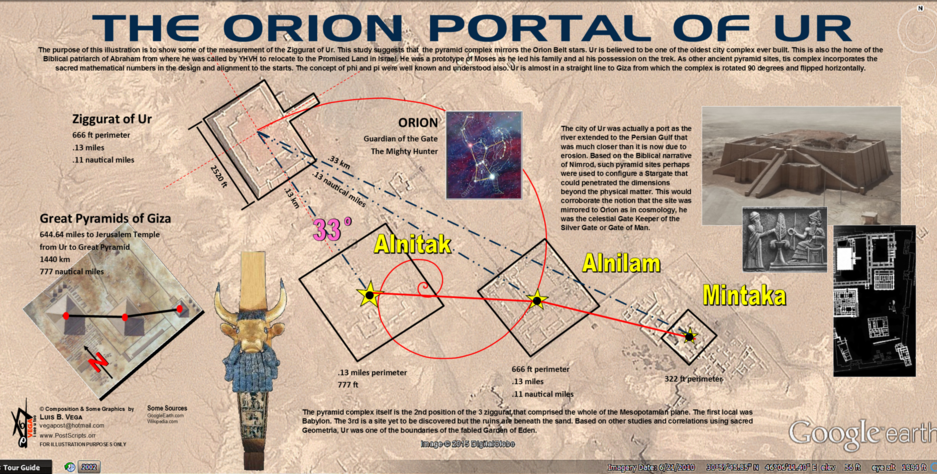 #163:
​UR ORION STAR GATE
CELESTIAL ENEMIES AT THE GATES
Unleashing the Apollyon out of the Pit

‘And the sixth angel sounded, and I heard a voice from the four horns of the golden altar which is before God, Saying to the sixth angel which had the trumpet, Loose the four angels which are bound in the great river Euphrates. And the four angels were loosed, which were prepared for an hour, and a day, and a month, and a year, for to slay the third part of men.’ -Revelation 9:13-15

The purpose of this Chapter is to focus on the dimensions of the ancient city of Ur in particular to the overall ‘Dimensions of Paradise’ study. The Bible depicts the Garden of Eden to be in the midst of 4 rivers. This is the place on Earth where the creator GOD YHVH placed the first 2 humans, Adam, and Eve. Due to the rebellion and fall of Humanity, mankind had been expelled from the Garden of Eden that is also euphemistically referred to also as Paradise. The Bible states that YHVH had to place flaming Cherub with swords to guard its ‘Gate’. Due to the Flood of Noah, the topographical devastation has blurred the boundaries of where Eden was or is. What still remains are clues based on sacred geometry that outlines possible boundary markers of where Eden might be.

This study suggests that whole region of the Middle East has a layout with ancient temples that possibly marks these boundaries. Perhaps the sacred knowledge of where Eden has been lost in general, but Lucifer and his demonic Fallen Angles know where it is at as Lucifer was there when he deceived Eve and Adam to join his Angelic Rebellion against YHVH. Perhaps some secret Kabalistic orders do know the place and location but are not sharing such information. Certain governments and world leaders have attempted to rebuild such monuments and temples as with Babylon in Iraq, etc., for this very purpose.

This has been said to be one of the real reasons the USA invaded Iraq, aside from oil. Ancient Ur of the Chaldeans is just one example of numerous sites around the world that specifically mirrors Orion. It is very fascinating to consider the knowledge of Astro-Archeology, sacred mathematics, and Earth’s dimensions when such buildings and sites were chosen. A recurring theme is the alignment of 33° that is incorporated into the direction and layout of the various sites. This degree is considered the number of arches in the Mazzaroth or Zodiac of the Universe where it is believed by some that the Gate of Heaven is located. Also, it might be from where the Fallen Angels seek to overthrow the LORD YHVH in the present Angelic Conflict between Lucifer and Jesus Christ for universal dominion and the souls of mankind on Earth.

It is no surprise that within many military bases all over the world, Black-Ops, experiments, time travel, mind control are being conducted with so called ‘Alien’ oversight. Such clandestine operations are purported to be occurring in which in some cases the abducting of children and adults is occurring for Satanic ritualistic purposes. According to the Book of Enoch, the Fallen Angels that came to Earth bestowed their sacred knowledge of Heaven’s geometry and required men to build them temples of worship that mirrored their abodes in Heaven from where they were expelled along with Lucifer.

Ur is just one center of such demonic worship from where YHVH called Abraham to leave for Israel, the Promised Land. Imam Ali Airbase, currently a military airbase near Nasiriyah, Iraq is at the foot of ancient Ur. It is also known as Tallil Air Base. Until December 2011, the base was used by United States Armed Forces. It is generally known as Camp Adder by the U.S. Army. Such sites are valued for their sacred geometry and ley-lines which mirror the stars and constellations and signs in Heaven. Such geometry is said to function in opening ‘Star Gates’ that cross and intersect the physical and spiritual dimensions.

The Bible in Revelation 9:14 states that there are Angelic Being, or Fallen Ones chained spiritually in this area of the Middle East. They are situated around the River Euphrates for the purpose of being released through such ‘Gates’. Their sole task is to call the nations to war against Israel in the Battle of Armageddon. Nations have fought over such areas as with the USA in the Iraq Wars. Why this area and this specific place is of prophetic interest to the Luciferians is that it was the 1st place Nimrod opposed YHVH in his attempt to open a Stargate with Satanic magic and the Tower of Babel. Perhaps such people with the help of the U.S. Military have sought to attempt this in the End of Days.

Also is that this region is tied directly to the Seal Judgments of the Wrath of the Lamb that is going to be unleashed by Jesus. This takes place during the Tribulation when Angelic activity will be implementing the judgments that not only affect man but demonic Angelic Beings as well. The scenario of Revelation chapter 9 depicts an event that will result in the loss of 1/3 of the human population from planet Earth when the 6th Seal is broken, and its sentence is read and executed. The current turmoil in the Middle East is just a reflection of this contention also occurring in the spiritual.

Precisely in the region of Iraq, such current bloodshed will not be compared to what will be coming upon the region that will spill over to Israel and the world. Perhaps a nuclear exchange of some sort will be involved as such weapons of mass destruction are only capable of killing 1/3 of humanity. Presently if one takes into account the 7 billion souls on Earth, 1/3 would roughly amount to 2,333,333,333.33 or just over 2 billion that will parish in this one event alone. The purpose of this illustration is to show some of the measurement of the Ziggurat of Ur. This study suggests that the pyramid complex mirrors the Orion Belt stars. Ur is believed to be one of the oldest city complexes ever built. The city of Ur was the home of the Biblical patriarch of Abraham.

The Orion Portal of Ur
It was Ur where he was called by YHVH to relocate to the Promised Land in Israel. He was a prototype of Moses as he led his family and all his possession on the trek. As other ancient pyramid sites, this complex incorporates the sacred mathematical numbers in the design and alignment to the stars. The following are some measurements that are highlighted using Google Earth coordinate and are an approximation.

Great Pyramids of Giza
644.64 miles to Jerusalem Temple
from Ur to Great Pyramid
1440 km
777 nautical miles

From Ziggurat center to the 3rd Complex center
= .33 km

If one studies End Time and has ever attempted to calculate the End of Days with certain formulas, one will easily recognize the numerical value of 2520. This is the divine constant by which prophetic time is based on. This proportion like phi and pi are part the magnificent mathematical signatures of the Creator YHVH. The concept of phi and pi were well known and understood also. Ur is almost in a straight line to Giza from which the complex is rotated 90 degrees and flipped horizontally to obtain the same 3 pyramid Orion’s Belt correspondence. The city of Ur was actually a port as the river extended to the Persian Gulf that was much closer than it is now due to erosion.

As noted, based on the Biblical narrative of Nimrod, such pyramid sites perhaps were used to configure a Stargate that could penetrated the dimensions beyond the physical matter. This would corroborate with the notion that the site was mirrored to Orion as in cosmology, he was the celestial Gate Keeper of the Silver Gate or Gate of Man. The pyramid complex at Ur is itself the 2nd position of the 3 ziggurats that comprised the whole of the Mesopotamian plane and perhaps the boundaries of the Garden of Eden. The first local was Babylon. The 3rd is a site yet to be discovered but the ruins are beneath the sand. Based on correlations using sacred Gematria, Ur could very well be one of the boundaries of the fabled Garden of Eden.
___________________________