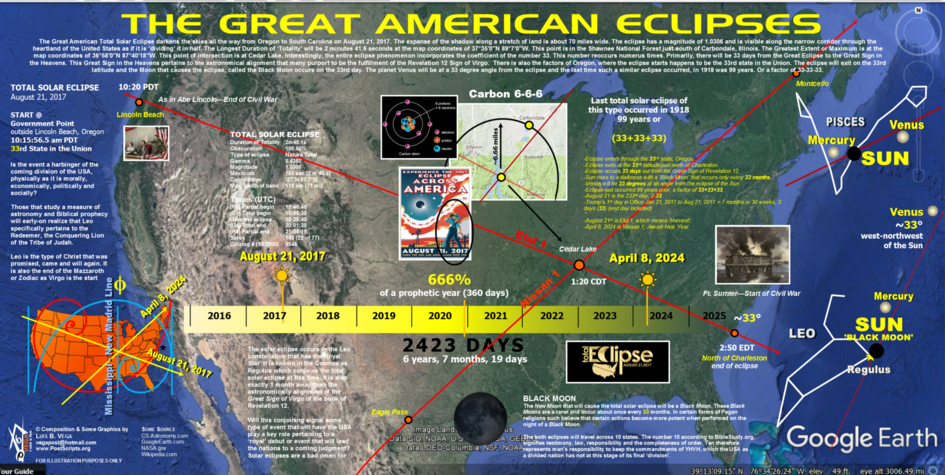 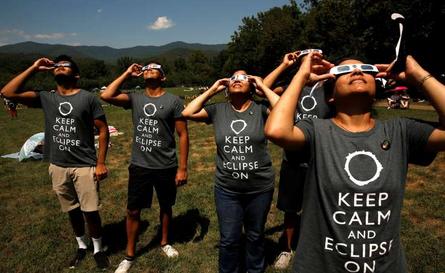 ‘See, the Day of the LORD is coming —a cruel day, with wrath and fierce anger—to make the land desolate and destroy the sinners within it. The Stars of Heaven and their constellations will not show their light. The rising Sun will be darkened and the Moon will not give its light.’ –Isaiah 13:9

The purpose of this study is to analyze the possible implications of the numerical value of 33 correlations of the total solar eclipses that crisscross America on August 21, 2017. There is thus a sort of Biblical prophetic overtone of the likes of the divine judgment of Egypt as it was during the Exodus; there was darkness over the land and there were 10 Plagues, etc. Perhaps, such a celestial phenomenon will echo a divine judgment of sorts also for the USA from here on out. What this study will further highlight is that the apparent convergence of this ‘omen’ alludes to the numerical value of 33. The 2017 solar eclipse spans nearly half of the globe, yet traverses only 1 nation, the USA. On that day, the morning will be darkened much like Isaiah 13:9 depicts.

The New Moon that will cause the total solar eclipse will be a Black Moon. These Black Moons are a rarer type and occur about once every 33 months. In certain forms of Pagan religions, such believe that certain actions become more potent when performed on the night of a Black Moon. August 21 is the 233rd day; 2-33.The total solar eclipse of August 21, 2017 will enter the continental USA around the area of Lincoln Beach in Oregon, the 33rd state and exit the USA on the 33rd degree just above Charleston, South Carolina. What is amazing, as others have pointed out is that this traversing of a total solar eclipse across America has not occurred since 1918, exactly 99 years. This 99 number can be factored-out as (33+33+33).

The eclipse of 2017 occurs exactly 33 days away from the astronomically alignment of the Great Sign of Virgo of the book of Revelation 12. From the study by BibleStudy.org on the Biblical meaning of number, 33 also derives some of its meaning from the total number of times '3' or '.33' is used in the book of Revelation. Because it is the product of 3 times 11, it can represent YHVH's judgment. Thus, the book of Revelation illustrates YHVH's complete, final judgment of the world, and perhaps of the USA. The following are just some samples of the esoteric and Biblical inference to the number 33. The 33rd time Noah's name is used in the Bible is when YHVH makes a special covenant or promise with him. This also has an obvious context of divine judgment. A normal human spine has 33 vertebrae when the bones that form the coccyx are counted individually.

This can be described as the solar path that will cast the shadow line across America can be likened to the national ‘vertebrae’. What is also unique is that the approximate width of this shadow line will be 70 miles. Is it coincidence that such a number, to prophecy students, echoes the 70-year anniversary of Israel’s vote in the UN to become a nation in 1947? Furthermore, the number 33 is, according to the Newton Scale, the temperature at which water boils. Does this have some possible prophetic implications that YHVH’s patience has reached a ‘boiling point’ with America? According to BibleStudy.com, in the Bible, the divine name of Elohim appears 33 times in the story of Creation in the opening chapters of Genesis. Also in Genesis, the 33rd time Abraham's name is used in the Bible is when Isaac, the Child of Promise, a foreshadowing of the coming of Jesus Christ is born to him when he is 99 years old (33+33+33).

As noted, the solar eclipse’s Maximum for the August 21, 2017 eclipse will be just south of Carbondale in Illinois. It will exit the nation in the direct path of Columbia and just north of Charleston, South Carolina. Precisely the eclipse will exit off Key Beach. The total solar eclipse of April 8, 2024 will intersect this same Maximum Eclipse point just south of Carbondale, Illinois in the edge of Cedar Lake. The calculated intersecting point is at 31.22N, 121.45E. This will occur on April 8, 2024 and comes from the southern diagonal to form an ‘X’. Many believe that this ‘X’ marks the spot as a type of prophetic marker for America’s judgment. This is much like the ‘markings’ that the hand wrote on the wall for Balthazar in Babylon during the days of the prophet Daniel.

This was the same judgment that befell Balthazar of Babylon. His empire was found ‘lacking and thus divided’. As to America’s leader, President Trump, from Trump’s 1st day in Office on Jan 21, 2017 to the August 21, 2017 Great Eclipse = 7 months or 30 weeks, 3 days (33) with end day included. Will it be no different for the American Empire? Biblically speaking, each occurs in the new months of Elul and Nissan. Some 33 years from 2017 was 1984 when the Orwellian book ‘1984’ depicted a coming New World Order. As noted in the prior study, the area of southern Illinois is called Little Egypt and many points along the Mississippi River are attributed to the names of the Nile. It is also rather unique that both rivers start on the same Latitude as the Mississippi River flows south to the Gulf of Mexico and the Nile River flows north to the Mediterranean Sea.

​It is rather interesting that Carbondale takes its name from Carbon. The chemical element Carbon with symbol C and comprise what humans are made out of. Interestingly, Carbon has 6 neutrons, 6 protons and 6 electrons thus a 6-6-6 typology and encryption. Interestingly the days between the 2 crossing eclipses are 2423 days or 666% of a common year. As many know, the number of the coming Mark of the Beast or AntiChrist is 666. He will be human in some sense as Jesus was and is but more than that as well. The 2017 total solar eclipse is in conjunction to Regulus, the ‘Star of the King’ in Leo. It is also interesting that the Great Sign of Virgo that occurs 33 days after the Great American Eclipse occurs also in 2017, just prior to this same Blood Moon Triad. The following is the short list of 10 reasons why the numerical factor of 33 found associated with this 2017 Great American Eclipse could very well be prophetic.

Upon further investigation, the eclipse’s path from the point of Totality will have a heading of 33 degrees toward its exit just north of Charleston. This angle will take the path near the ‘American Stonehenge’ of the Georgia Guide Stones. As for Charleston, it is where the ‘Mother Lodge’ is situated of all the Luciferian 33 degree Scottish Rite Masonic Lodges. Does the factor of the numerical value of 33 associated numerous times with the Great American Eclipse of 2017 signify a ‘judgment’ on one level of meaning? Perhaps it is giving a pivotal clue as to the prophetic nature of the signs and what they are possibly signaling. It is as if it is a ‘Handwriting on the Wall’; of an empire found to be lacking and thus to be divided like Babylon, like Egypt.
_________________________