The purpose of this reporting is to mirror a post of an article from the EncouragingAngels.com website of a response by Stan Szymanski to a Scientific Paper. It deals with the issue of the Nanofiber Swabs that are being used to collect the DNA of People for inspection to see if one has COVID-19. The DNA samples are then run through the PCR tests. Szymanski provides evidence that these Nanofiber Swabs are not the regular Cotton Swab types but ones in which Toxic Materials are indeed being introduced into the human body, through the Nasal Passages for easy access to the Brain.

The response Article will be commented when certain statements are made, with permission. Portions will be highlighted and words and/or numbers will be capitalized for emphases. The Szymanski response was in reference to the article entitled, ‘Ultra-Absorptive Nanofiber Swabs for Improved Collection and Test Sensitivity of SARS-CoV-2 and other Biological Specimens’ (McCarthy et. al. ‘Nano Letters’ 1508-1516 Jan. 27, 2021)’. Szymanski highlights what the Authors of the Scientific Paper supporting Nanofiber Swabs claim.

After Szymanski examined of the materials and he noticed a lack of proper documentation. The question he then naturally posed was, ‘At What Risk’? He rightly notes that PCL (Polycaprolactone) is a Biodegradable Polyester. And is the 1st Ingredient in the Nanofiber Swabs. He notes that PCL is degraded in Physiological Conditions such as the human body. But what was most interesting is how Szymanski understands that Biodegradable Polyester will be used for the preparation of long-term implantable devices. This is what the new Experimental mRNA ‘vaccines’ are for really. It is not about COVID.

This new mRNA technology now can provide a Delivery System by which a variety of Drugs can be encapsulated within PCL beads. It is then used for the controlled release of Genetic Code and Targeted Drug Delivery. This is the real reason for the inordinate push to mass-vaccinate the entire world. It is to fuse Man with Machine, biologically at the Genetic Level. This even posted in the Moderna Website of how they see and consider mRNA an ‘Operating System’. And in fact have Patented ‘mRNA-OS’ as a viable Computing App that will eventually build on in the human bodies by Injections. Laurence W. McKeen, in Permeability Properties of Plastics and Elastomers, Third Edition, 2012.

In this Study, Szymanski points out how it was shown that PCL Pellets and Fluronic F-127 were dissolved in a Solution of 4:1 ratio DCM. DMF. The problem? DCM and DFM carry Warnings for Human Exposure. How So? Dichloromethane (DCM) is ‘Classified as a Neurotoxin. Szymanski, in his research reports that Dichloromethane has been proven to cause damage to the Brain and the Central Nervous System (CNS). So the obvious question is what are these Neuro Toxins doing in these types of Swabs that are being rammed-up through one’s Nose to the base of the Brain?

In his research, Szymanski stated that the Environmental Protection Agency (EPA) has classified Dichloromethane as a Probable Human Carcinogen. Then he goes on to report that regarding DMF, ‘Acute or Short-Term exposure to Dimethylformamide has been observed to damage the Liver in Animals and in humans. Szymanski goes on to list the symptoms of any Acute Exposure in humans to include: Abdominal Pain, Nausea, Vomiting, Jaundice, Alcohol Intolerance, and Rashes.

Szymanski then asks the question, ‘Do People potentially like to have aclose exposure to Carcinogens and Neurotoxins?’ Well, the rationale answer would be no. He goes on to report that the Authors of the Scientific Study purchased for the use in the Scientific Study, Human Embryonic Kidney Cells (HEK293). This was for ‘Cell Swabbing’ to occur in the Study. The problem? This Cell Line comes from an Aborted Fetus.

He asks the question, ‘Why did the Researchers have to use the cells of Aborted Human Babies?’ He notes that why could they not have swabbed Animal Cells for the test. And he then notes that these Nanofiber Swabs would never be used to swab a Kidney of a Child. He also notes that the company purchased the HEK293 Cells from ATCC (ATCC.org).

Szymanski then reports that the Authors of the Scientific Paper did not divulge what ATCC Catalog Number of the HEK293 Cells they used. He notes that this is important because in searching for the HEK293 on ATCC.org, one of the choices for HEK293 Cells was 293[HEK-293] Cas9 (ATCC® CRL-1573Cas9™

Szymanski notes that in this particular ATCC Catalog Option, HEK293 Cells are Cell Line that constitutively expresses Cas9 Proteins. Any issue with this? Only that Cas9 is a Protein that enables Researchers to carry out CRISPR Genome Editing Applications with high efficiency. Szymanski goes on to state that to be clear, he did not know exactly which of the Catalog choices the Authors of the Scientific Study used in their work. He notes that it was just HEK293 from ATCC. His conjecture is that if, by chance it was 293[HEK-293] Cas9 (ATCC® CRL-1573Cas9™) from the ATCC Catalog, what could that mean that Tests were being conducted on these Novel Nanofiber Swabs to see if they might be employed in some form of Genomic Editing/Modification.

One would venture to say that this would most likely be the case. This would be certainly alarming since that is what the function of 293[HEK-293] Cas9 (ATCC® CRL-1573Cas9™ cells are for. Szymanski then states that the Authors of the Scientific Paper conducted ‘Cell Swabbing Tests’. They used the HEK293 Cells they purchased, but unlike other areas of the Study (SARS-CoV-2 detection, Material Characterization, Mass Loss and Protein Detection), a key revelation was not disclosed to the General Public in their publication.

Szymanski  noted that the Authors of the Scientific Paper, however, did not report the results of the Tests of ‘Cell Swabbing’ the HEK293 Cells. Why not? People would be perhaps hesitant about being smeared with an Aborted Baby Product that is incorporated in the Nanofiber Swab. That could stop many People from wanting to be tested for COVID-19 or worse, not knowing that they are being experimented on with Genetic Modification in a pretext of extracting just DNA for a COVID-19 Test. Szymanski noted that there is another disturbingly interesting fact as he put it about the 293[HEK-293] Cas9 (ATCC® CRL-1573Cas9™ Cell Lines. He directed his Readers to go to the ‘Technical Data Sheet.

There, one will see that the ‘Tissue/Disease Source is listed as ‘Carcinoma’. Although he does emphasize that it is not known which ATCC Catalog Version of the cells they actually used. But only that they used the 293[HEK-293] Cas9 (ATCC® CRL-1573Cas9™ Cell Lines. But if this was the case, then this type of Cell Line could potentially be part of a Nanofiber Swab. And in turn, it could find its way into the Brain, through the Nose. The problem? Human could be given these Carcinogenic HEK293 Cells as part of Nanofiber Swab makeup.

In conclusion to the Scientific Paper, Szymanski reiterates what the Study stated: ‘The Nanofiber Swabs show great promise in improving Test Sensitivity, potentially leading to timely and accurate diagnosis of many diseases.’ Szymanski stated then that it may be true. But the Authors of the Scientific Paper left out damning evidence and information about the Potential Health Risk factors of the use of Nanofiber Swabs in human beings.

He also then comments that, apparently the Pharmaceutical Companies have had the risk of the ‘vaccines’ legislated away. He states that perhaps the Manufacturers of the Nanofiber Swab will have no Personal Risk either. But after his examination of the information in the McCarthy et. al., Study, Szymanski only assume that if one allows these Neuro Toxins that are in the Nanofiber Swabs to be put up one’s Nose, that all the risk is on the person then.
________________________ 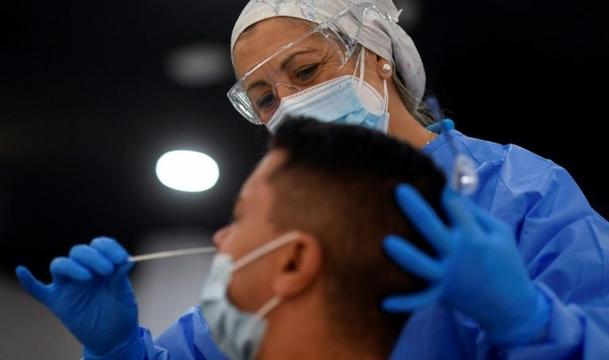