#153:
​SONS OF NOAHRELIGIONS
THE FIRST WORLD ORDER
A Geographic and Cosmological Correlation

‘Elohim created man in His own image, in the image of Elohim He created him; male and female He created them. Elohim blessed them; and Elohim said to them, be fruitful and multiply, and fill the Earth, and subdue it....’ –Genesis 1:27-28

The purpose of this study is to show geographically the delineation of the 3 major religions currently present on Earth. These 3 religions are Christianity, Judaism, and Islam. There are marrieds of other religions with numerous subdivision and denominations. There are also a category of non-religions and there are those that are devoid of any practice of such. However, this does not rule out a belief system as even in the case of Atheism and those that are Agnostic, it is a belief system nonetheless with an element of faith in that causality. Essentially religion was and is a philosophy in that it seeks to explain the existence, cause, and effect of Humanity and the beyond. Christianity came out of Judaism, but Islam came 700 years later after Jesus Christ and is a plagiarism of both Judaism and Christianity.

The main difference between Christianity and Judaism is the issue of who the Messiah is. The Christians, who were Jews first claim Jesus of Nazareth was the Messiah and await His 2nd coming. The Jews on the whole are still expecting the initial arrival of the Messiah. What the chart seeks to correlate is an association that is both geocentric and astronomical. Given the 3 religions, they will be corresponded to their respective capitals; Islam with Mecca, Judaism with Jerusalem and for the purposes of this illustration, Moscow for Christianity. Moscow is considered the 3rd Rome as Christianity has had 3 capitals; Rome, Constantinople, and Moscow. What this study also seeks to correlate is that each religion corresponds to the successors of the 3 sons of Noah after the Flood.

The religions appear to match the geographical location for where the descendants eventual ended up after the migration from the Tower of Babel. For example, the sons of Ham or Chaim eventually migrated south to the areas of Arabia and Africa. These areas are presently the strongholds of Islam. For Judaism, it was the sons of Seth that relatively stayed within the confines of the general central area where the Ark came to rest or that of the Middle East, technically the Near East as the Middle East is actually India and the Far East pertains to China, etc. Lastly the sons of Japheth or Yapeth, which means beautiful migrated to the northern latitudes, in general. Consequently because of the global changes on Earth after the Flood, the various shields and protective layers that were present with the canopy were destroyed.

The Earth was subject to the damaging cosmic rays of radiation on the DNA and the 4 seasons and natural elements. These factors, in part contributed to the shorting of the human lifespan and helped accelerate the physical process of the ongoing deterioration of the human body. As a direct consequence, the 3 main descendants of Noah that became the distinct races took on a skin color pigmentation corresponding to the environment in which they settled. Those closer to the Equator became darker to protect the body from the greater degree and intensity of the Sun’s damaging rays. Those in the mid latitudes took on a more neutral or pearl to copper color of skin tones. Those in the northern regions adapted to the climate and as there is less sunlight and due to the degree of the Sun’s rays, the skin became lighter. What this study also suggests is that the 3 religious’ capitals of the 3 sons of Noah are amazingly geographically correlated by the Golden Section.

These capitals are in an apparent phi ratio proportion to one another. Moscow, Jerusalem, and Mecca are mathematically related with Jerusalem being at the fulcrum of the phi ratio spiral when suing this various for illustration emphases. Moreover, the axis ley-lines of this phi ratio spiral corresponds to Mt. Ararat where the Ark of Noah is said and believed to be resting. The other ley-line intersects the area of Asia Minor or Turkey where the 7 Churches of the Apocalypse once stood. A possible further correlation is that the 2 of the 3 Christian capitals of Rome and Constantinople are in a direct alignment with Mt. Ararat. Lastly the study seeks to show that there is also cosmological association of these religious ley-lines. The end points geographically of the 2 religious capitals Christianity and Islam with Mt. Ararat centered between them also appear to correspond to the 3 stars of Orion’s Belt, Alnitak, Alnilam and Mintaka. The migration of the descendants of the Sons of Noah did not occur until the Tower of Babel incident in the Plains of Shinar.

According to the Bible, YHVH commanded the promise with a blessing to ‘multiply and fill the Earth’. However, after the Flood of Noah, Nimrod rose against this divine directive and on the contrary sought to establish the 1st Luciferian World Order in defiance to YHVH’s command and plans. Nimrod was from the descendants of Ham and attempted to unify the world under 1 government, 1 financial system and 1 world religion. Many believe that perhaps as the 1st type of the AntiChrist and Son of Perdition began this ‘Great Work’, a similar descendant of Ham, having the spirit of Nimrod will be the last type to complete it. It very well could be a same type of personage and from the same racial line, that of Ham and the corresponding religion of Islam that the last AntiChrist type might be to usher in the last World Order to complete what Nimrod failed to accomplish.
________________________ 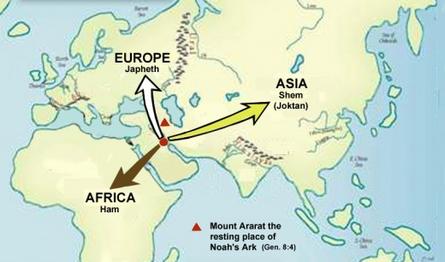