‘Without growing weary, you have persevered and endured many things for the sake of My name. But I have this against you: You have abandoned your first love. Therefore, keep in mind how far you have fallen. Repent and perform the deeds you did at first. But if you do not repent, I will come to you and remove your lampstand from its place.’ –Revelation 2:4-5

The purpose of this study is to ascertain the cosmic array of the sacred ley-lines of the ancient city of Ephesus. Ephesus, which is now Selçuk in Muslim Turkey was for centuries a Greek colony and later on the center of Christianity in the Roman Provence of Asia. Ephesus contained 1 of the 7 Wonders of the World, that being the Temple of Artemis. This ‘goddess’ was known from before the Tower of Babylon and traces its roots to Inanna. She was believed to be on the original ‘winged-gods’ of Earth’s earlies ages that seeded Humanity in the Garden of Adin. Some believe she was the contingent of Anunnaki that come from the Stars such as Orion, Taurus, the Pleiades and Mars. Thus ancient sites even after the Flood of Noah continued to venerate such ‘gods’ through temples with idols though the ‘spirits’ of the ‘gods’ would dwell in.

The various temple layouts thus also were designed and made to correspond to the sacred ley-lines of the constellations of Orion, Taurus, the Pleiades and Mars for example. This cosmic template is replete in being some sort of standard pattern that is not only repeated in all ancient types of centers of worship, in all contents but is seen also in modern world capitals as well, etc. What is amazing to consider is the accuracy of the ley-lines made on Earth with such temples of worship and geometric and geological markers is remarkable as it can only truly be appreciated from the air. Such knowledge of the constellations was outstanding as it is recorded and collaborated in the book of Enoch that in fact ‘winged-gods’ or Angels did have interaction with humans, directly in Ages past.

There appears to be also several layers of interventions of the Angelic type into Humanity’s history. The book of Enoch is more specific in the details than the Bible is about such dealings as Humanity was taught certain forbidden types of knowledge. Nonetheless, such centers of worship like Ephesus is a prime example of how its esoteric designers of the city layout incorporated the triple Star clusters of Orion, Taurus and the Pleiades. Not only was these Stars arrayed in the temple and city outline, but the Cydonia, Mars pyramid complex was also incorporated as did most other prominent centers of worship in the ancient world. This study seeks to illustrate the approximate depiction of such a layout of the entire city area of ancient Ephesus. The first rendition of the sacred and perhaps prophetic ley-lines has to do with the center of Ephesus.

The City of the Winged Gods
The city of Ephesus was the capitol of Roman Asia and it is said that it reviled Rome at times in terms of commerce and wealth. It had a prominent amphitheater called Philippon in the Greek and was situated on the edge of an inlet of water that took cargo ships in and out of the Aegean Sea. What this study suggests is that this core section of the city appears to mirror the Orion Belt Star cluster that would also be multilayered to incorporate the design of the Great Pyramids of Giza and the Sphinx. If one does superimpose the outline of Orion and the Great Pyramids, the Orion Stars and Great Pyramids match the 3 main structures of Ephesus. What is rather unique about Ephesus is that in most other cases of the Orion Star template each of the Stars would correspond to a structure or temple. In the case of Ephesus, the areas are open, as if inverted with their 3 open-are spaces or Agoras.

Furthermore, the apparent location of the Great Sphinx corresponds to some type of small building structures that are now in ruins but the ley-lines appear from a top view to correlate to the Sphinx’s position in relation to the Great Pyramid pattern. It would appear that the Ancients attempted to incorporate the sacred geometry of the array of the constellation with the natural topography of the given area. Perhaps even the names of the 3 streets of Ephesus, that of Harbor Street, Marble Street and Curates Street in some fashion echo the last abode of the home from where the ‘winged-gods’ came from and attempted to replicated such an estate, on Earth as it is in Heaven.

The next observation has to do with the inlet harbor that edged-up against the city. From a top view, this waving outlet of water appears as if a ‘serpent’ of sorts from the sea that comes in to the city to attach itself to it although it is now all silted-up. Upon further study, if the same Orion Star constellation outline is considered, then the precise location of the ‘head’ of the harbor body of water appears to portray the ‘head’ of a serpent or ‘dragon’. It so happens that astronomically, the Dragon Nebula of Orion is situated at that corresponding location in Ephesus just west of the Harbor Gymnasium and Orion Star of Alnitak. Astonishingly, it is also at a 33 degree slope from the ley-lines of the Orion constellation outline. The subsequent observation have to do with the overlay of not only the Orion constellation outline but that of Taurus and the Cydonia, Mars pyramid complex. From a top view the Cydonia, Mars complex is rotated approximately 90 degrees counter-clockwise.

The Love of the Pleiades
The Martian Motif includes the Face of Ala-lu or ‘Face of Mars’, the Giant Fortress Pentagon and the 7 Pleiadian Pyramid City, and so too does the Ephesus environs portray such a depiction. The D&M Pyramid corresponds to the Ayasuluk Fortress. The Face of Mars corresponds to a tennis sports complex that is strikingly suggesting a ‘face’. The side structure of lesser size is also present as it is rotated approximately 180 degrees. The Pleiadian Star cluster is to the south of the present day city but is yet to be concretely identified by some markers other than an earthen mount of some type of ancient ruins yet to be identified appear to correspond to this astronomical alignment. Next, the constellation of Taurus is configures and seen in the city ley-lines of present day Selçuk.

It is built upon ancient outlines that have the Taurus constellation elongated and the line from the ‘head’ of the Bull to the Pleiades directly intersects of the fortress hill of Ayasuluk. What is astonishing is that the angle and degree heading of this ley-line points to a distant range of hill, 7 hills that are situated just north of the city in the outskirts. Lastly when one superimposes the ‘triangle’ of the 3 Martian Motifs and invert the triangle to form a hexagram, the intersecting point on the right side of the hexagram approximates where the Temple of Artemis once stood. This same ley-line is also the ‘back’ edge of the outline of Orion when superimposed on the Ephesus map. It is amazing to consider how the entire layout of the Ephesus area depicts the Orion-Taurus-Pleiades Star clusters. In terms of the Taurus outline, it is approximately rotated horizontally 180 degrees and flipped on its axis entirely to produce a mirrored image on Earth.

The history of Ephesus, pertaining to the Gospel’s history is rich on the account of Paul’s missionary journeys there as recorded in the book of Acts 19. It was at Ephesus that Paul would first go to the synagogues of the Jews but upon being rejected would have a custom to preach open-air in the Agoras. This started a riot as all the people of the city gathered at the amphitheater and shouted down Paul for 2 hours chanting the familiar type, ‘Great is Artemis’, etc. This same vein of vanity is where ‘Great is Allah’ or ‘Allahu Akbar’ echoes the spirit of AntiChrist from where it comes from. In terms of numbers, it is interesting that 2 hours equals 120 minutes or 7200 seconds. It is rather amazing that the same origins of this ‘goddess’ of Artemis and Allah appear to have the same storyline. Both had a green emerald rock fall from Heaven of the Goddess that later was housed as an Idol in the Kaaba of Mecca and the Temple to Artemis.

Later on, during the Christian era, the Basilica of St. John was constructed and from the material off of the Temple of Artemis no less. Thereafter, the Mongols and Muslims invaded and destroyed the Church. The Muslims used the materials to build a mosque. This goddess that ‘fell from the sky’ like Lucifer was known as the Moon Goddess and portrayed in many fashions. She was the ‘Queen of Heaven’ and also the fertility goddess as she was at Ephesus specifically portrayed by many testes of bulls ordaining her body, etc. She is in essence the veneration and worship of the ‘winged-gods’ that had come from the Stars, Inanna, Ishtar, Isis, Allah, etc. This ‘goddess’ is presently venerated by the Roman Catholics that portray her as being Mary, the ‘Mother of GOD’.

The Roman Catholic Mary is erroneously believed to be co-redeemer and immaculately conceived without sin, thus a ‘Christ’ unto herself as part of the framework of the alternate and false Gospel and Church. It is rather interesting that the legend of Inanna attributes her to the fabled Amazons of super-powerful giant women. She could be perhaps one of the types of Fallen Angles that rebelled although most often, Angles in the Bible are depicted as men. In one case however, Zechariah 5, such is the case. It is understood that Fallen Angels can take the form and shape-shift into either type of human sex. It is a favorite pastime of Lucifer to transgender himself due to his vain beauty and narcissistic self-love. This Inanna is portrayed also having the Crescent Moon of the Muslims as her crown and is the ‘Queen of the Night’. She is associated with the owls, etc., and is also often depicted as a huntress.

According to research, Ephesus is the site where John the Revelator died and was buried on the pentagon Fortress of Ayasuluk. It is this same John, the youngest of the 12 Apostles of Jesus that was the only one left alive and wrote the last book of the Bible, that of Revelation. He wrote about 2 celestial types of ‘women’, the Virgin of Revelation 12 and the Harlot of Revelation 17. The prophetic significance of Ephesus is outstanding as it is the 1st Church of Christ Jesus’ Love. It is the church that Jesus first addressed in the book of Revelation that although there is no sin or rebuke, lost its ‘1st Love’. Jesus admonish her to return to that 1st Love and still does right down to the end of the Church Age.
_________________________ 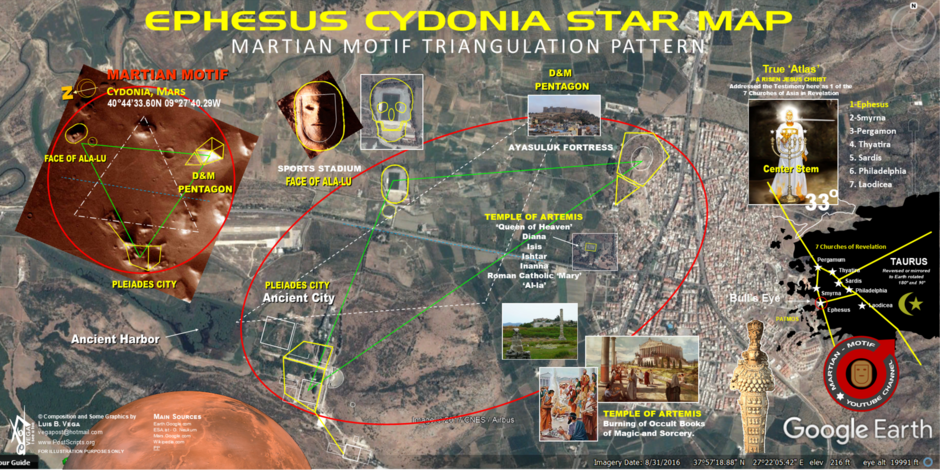 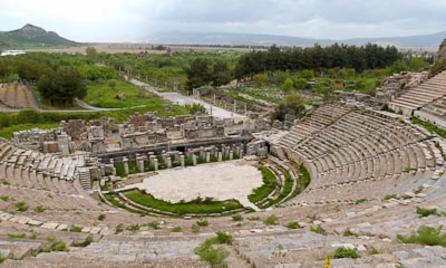