The purpose if this study is to highlight some very significant numerical values of the Temple Mount in Jerusalem. They involve some approximate measurements that are based on Google Earth coordinates. There appears to be some very sticking numerical coefficients that could be related to a measurement-to-year correlation. One particular number or measurement is 2016 feet or the year 5776. This theory is not new as others have discovered this unique variable about the Temple Mount platform.

This 2016 feet-to-year correlation pertains to the perimeter of the Inner Square of the Temple Mount platform. Based on some interpretation and calendar calculation, 5776 is a Sabbatical and Jubilee Year if one counts 7-year cycles of years from the liberation of the Temple Mount in 1967. What this study suggests is this correlation could be very significant is that the perimeter length of the Inner Square that the Dome of the Rock is situated on, 2016 feet could prophetically be signaling the Jewish Year 5776 and tied to the Temple on the Mount to come. This study further contributes to the perimeter measurement concerning 2016 feet in that it also approximates 666 yards and .33 miles in alternate units of measurements.

One noticeable measurement of the Outer Square of the Temple Mount platform is that its perimeter is 911 smooths. What this study suggests is that this 2016 or 5776 measurement-to-year correspondence of the Inner Square could perhaps have been a countdown ‘clock’ of sorts pertaining to the coming 3rd Temple YHVH on the Temple Mount. This sacred numerical variable perhaps was etched in the very dimensions of the Temple Mount of when Israel is to begin the construction of the 3rd Temple or have there be an event that would secure such an endeavor to allow for a construction.

Based on some Biblical interpretations and despite the current political, social and religious objections concerning a possible 3rd Temple, prophecies from the book of Daniel the Prophet and the book of Revelation bear witness to events that strongly suggest that there will be a 3rd Temple. It is well known that such Jewish organizations as the Temple Institute and others are ready for the Daily Sacrifices to commence and the construction of the Temple to begin; the blueprints are ready. The 3rd Temple will be built because the language of the Apocalypse speaks of a ‘standing’ and a ‘sitting’ within the Holy of Holies by the false Messiah AntiChrist during the Tribulation period.

This cannot be said or even hinted at concerning the current Spiritual House in which the LORD Jesus is resident through the Holy Spirit in the Body of Believers and is about to complete His Spiritual House, His Bride. This would be keeping in the relative pattern that as GOD the Holy Spirit initiated and commissioned the Church as a living Spiritual House made up of individual Believers in Jesus Christ, the physical Temple on the Mount and its Daily Sacrifices were taken away.

Thus, in reverse fashion, in the Last Days, as the Spiritual Temple made up of Believers in Jesus Christ comes to a completion and is to be taken away, perhaps the physical temple with the Daily Sacrifices will re-commence. Will the 2016 feet perimeter of the Inner Square of the Temple Mount platform indeed correlate to the feet-to-year theory? Will 5776 be such a benchmark year, a turning point or flash point that an initiation of such an endeavor to finally build the 3rd Temple, literally on the Temple Mount platform is to commence?
________________________ 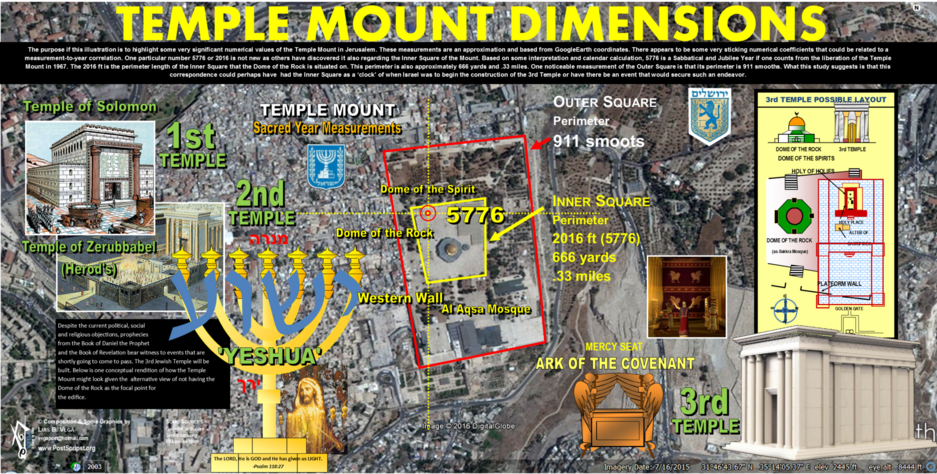