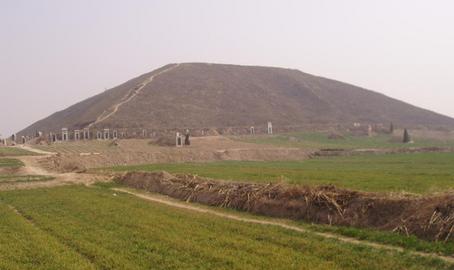 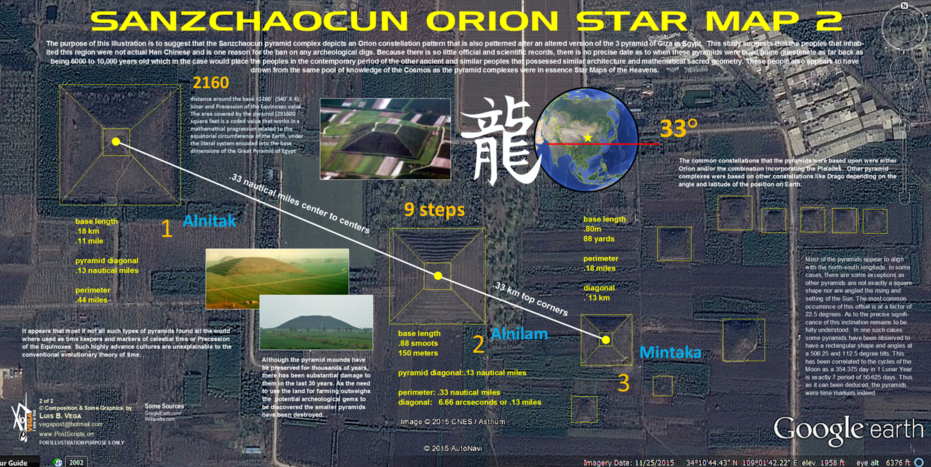 The purpose of this study is to suggest that the pyramid complex just outside of Sanzchaocun in China has the template of the Great Pyramid of Giza composition. This particular pyramid layout suggests that as the Great Pyramid complex in Giza is aligned and matches the Orion Belt star configuration, this one in China also has the same signature but in a slightly different array. There are also key measurements that are approximated using the GoogleEarth coordinates and suggest that the civilization that built these pyramid platforms were in direct contact with the civilizations of the Fertile Crescent, mainly Babylon, Sumer, Ur and Egypt. The evidence suggests that the mathematics involved and incorporated into the very designs utilized the phi ratio or Golden Number or Section. The sacred numbers appear to be incorporated in the base lengths, the diagonals and perimeters of the various pyramids that precisely match that of the Orion’s Belt star map of the Great Pyramid of Egypt and other ancient sites.

How the phi ratio is used in this Orion celestial composition within the pyramids is based on the distance between the 2nd and 3rd pyramid. It is precisely at a phi ratio distance from the 1st pyramid. The delineation of the Golden Section diagonal points to where the Sphinx of Giza would be situation as Giza template is superimposed on this Chinese pyramid layout. The end point corresponds to the Temple of Osiris next to the Sphinx. The Chinese communist government does not allow official archeological excavation to occur and has covered the pyramids with soil and planted trees on top of them to disguise their form. The Government that is atheistic does not want to disturb the Social Darwinian theory of Evolution that is based on gradual humanism and denies the Flood of the Bible that possibly explains the common origins of such complex pyramid building and extraordinary surveying.

Another unique characteristic of these Chinese pyramids is that all of them are truncated, meaning they had or have no pyramidion. Some suggest that there might have been a structure as often most did in the other ancient areas of the Americans in particular. Other suggest that it was also a factor of a measurement that was related to the Earth’s equatorial circumference that helped keep track of the Earth’s tilt that determined the Solstice’s and Equinoxes. For example, the distance around the base of the largest pyramid is approximately 2160 feet. This coefficient will be easily recognizable to the Biblical scholars that study End Times and those study astronomy and astrology. It is understood that the Sun spends 2160-years in each house of the zodiac during the 25,920year duration of the Precession of the Equinoxes. Thus, this number of 2160' can be factor-out as being 540' X 4 which is the key in deciphering the values of the lunar cycles and the Precession of the Equinoxes.

Surveyors Extraordinaire
Most non-mainstream archeologists would agree that around 6000 years ago, there was a common surge in worldwide pyramid building taking place on Earth. Such civilizations appear to possess a common core of knowledge and origin even. In the case of the China pyramids in the midst of the Xi’an region, no doubt that a star map will be one day correlated to the precise locations of each pyramid. This has been the case in all other pyramid complexes of the Americas, Europe and the Middle East. In one sense such star maps were to be seen from the sky and the surveyor skills are incredible to have matched the pyramid layouts with such precision when the peoples should have been mere hunters and gatherers with crude language skills as the Darwinian evolutionists argue.

One singular trait about all these pyramids from around the world that appear to have a common design origin is that they face east, the rising of the sun. How the Giza pyramid complex and Orion correlation comes about at this Chinese ‘Giza’ pyramid complex is through the rotation of the 3 pyramids to about 120 degrees. As the Egypt template is superimposed, what comes about this design is an amazing and suggested match. The common point will be matched to the corresponding largest pyramids that of the Great Pyramid to the largest one of the Sanzchaocun pyramids. As the center point the 1st and largest pyramid that corresponds to the Great Pyramid of Giza, is matched, the subsequent 2 pyramids are aligned at the corner angles of each corresponding pyramids. This rotation then approximates the angles of the phi ratio spiral that is used for a more striking visual. The following are some observed approximate measurements.

Sacred Knowledge of the Gate Keepers
This study suggests that the Sanzchaocun pyramid complex mirrors the Orion constellation pattern that is also configured in an altered version of the 3 pyramids of Giza in Egypt. The known research to date suggests also that the peoples that inhabited this region were not actual Han Chinese and is one reason for the ban on any archeological digs. Some theories as to the origins of these mounts are traced to peoples having a Caucasian racial background as red-haired mommies have been found in these pyramid areas, just like in Peru. Because there are so little official and scientific records, there is no precise date as to when these pyramids were build; some guestimate as far back as being 6000 to 10,000 years old. The following is an approximate measurement of each of the 3 Orion pyramids outside Sanzchaocun.

If these dates of origin and conjecture are valid, then it would place the peoples in the contemporary period of the other ancient and similar peoples that possessed similar architecture and mathematical sacred geometry just after the Flood of Noah. This particular time would then also coincide with the subsequent disbursement of the peoples after the Tower of Babel incident. This is where the common core knowledge would have been derived from. Moreover, such knowledge and technologies of mathematics and astronomy would have directly been carried over from the pre-Flood world through the sons of Seth perhaps. This racial lineage is where the Asians branched out to the near, middle, and far East to the lands of the ‘Rising Sun’.

This in turn would explain the cause for the intact civilizations suddenly sprouting up all over the world at the same time with a common knowledge of advanced language, astronomical, scientific, and mathematical understanding. For example, the distance around the base of the 1st Pyramid = 2160 feet or (540' X 4). This is a lunar and Precession of the Equinoxes value. Thus, the area covered by the pyramid, 291,600 square feet is a coded value related to the equatorial circumference of the Earth. This has been found to be encoded into the base dimensions of the Great Pyramid of Egypt. Apparently, the ancient world was much closer and in contact than previous thought.

Most of the pyramids appear to align with the north-south longitude. In some cases, there are some exceptions as other pyramids are not exactly a square shape nor are angled the rising and setting of the Sun. The most common occurrence of this offset is at a factor of 22.5 degrees. As to the precise significance of this inclination remains to be fully understood. In one such cases some pyramids have been observed to have a rectangular shape and angles at a 506.25 and 112.5-degree tilts. This has been correlated to the cycles of the Moon as a 354.375 day in 1 Lunar Year is exactly 7 period of 50.625 days. As it can be deduced, the pyramids were time markers indeed.

These people also appear to have drown from the same pool of knowledge of the Cosmos as the pyramid complexes were in essence star maps of the heavens. The common constellations that all the ancient pyramids were based upon were either Orion and/or the combination incorporating the Pleiades. Other pyramid complexes were based on other constellations like Drago in Angkor Wat depending on the angle and latitude of the position on Earth. The pyramids of China at Xian yang, Shi Huang in the Xi’an region are situated just north of the 33° longitude. It appears that most if not all such types of pyramids found all the world where used as timekeepers and markers of celestial time or Precession of the Equinoxes.

Such highly advanced cultures are unexplainable to the conventional evolutionary theory of time. Although the pyramid mounds have been preserved for thousands of years, there has been substantial damage to them in the last 30 years. However, as the need to use the land for farming outweighs the potential archeological gems to be discovered, some of the smaller pyramids have been totally destroyed.
________________________